This is what happens when you let the losers of an unjust war put up monuments to their heroes.

How do we feel about this monument put up by the losers of an unjust war…? 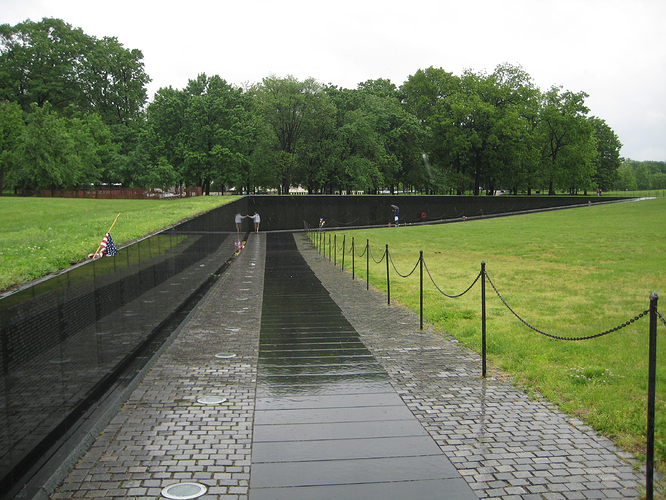 The Southern Poverty Law Center sent me this nicely printed and bound guide to Confederate monuments.

I would have been perfectly happy if the list was printed on cheap newsprint, and used more of the money I donate to perfect a truck-mounted laser able to silently melt large pieces of bronze into glowing slag from a safe distance. 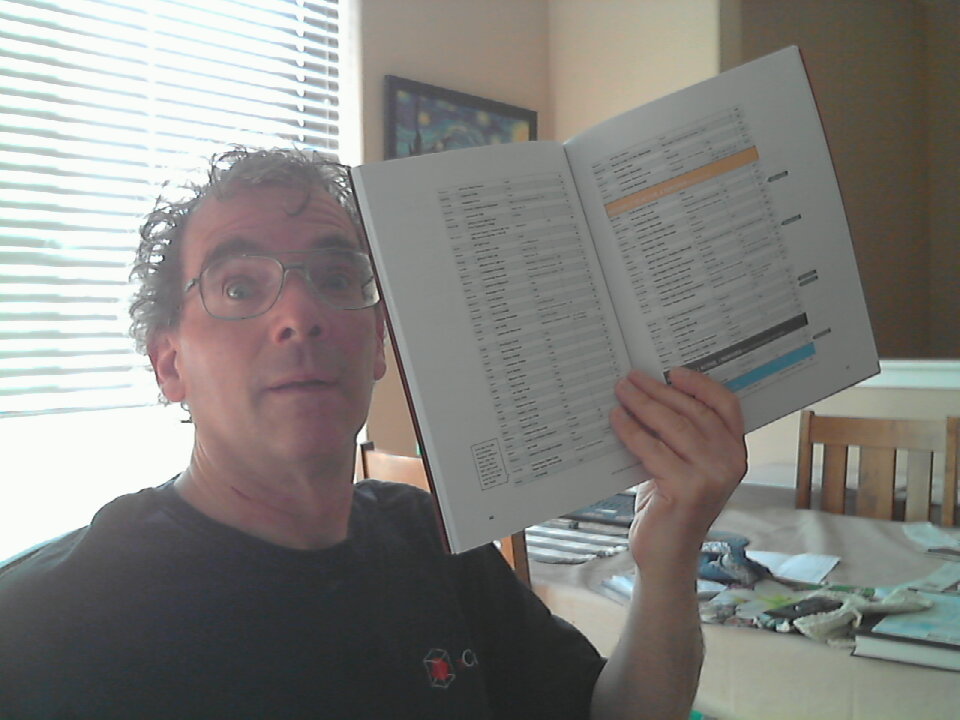 If it were located in Vietnam or Cambodia or Laos it’s fate would sure to be similar.

I really hope you are asking sincerely and not trolling.

The most salient design feature of the Vietnam memorial is that it is a gash in the earth. It is unlike almost every official war monument that came before it in its refusal to glorify the war or to portray its victims as heroic. Its attitude to war in general and the war it memorializes in specific is the diametric opposite of that of the confederate war memorials scattered across the south.

I’m not proposing to have an answer here, but a data point.

The tone of many Confederate monuments is that of some general or another, often mounted, in some heroic pose, gazing at the horizon, over the heads of the people who might observe the monument.

The memorial in Nashville is of a common soldier, slumped in fatigue, looking at the ground.

Again, I’m not offering an answer, just something that your post helped me to consider.

As graffiti goes it sure is pretty accurate.

The angle of the ‘V’ is pretty shallow-- not like a gash at all. 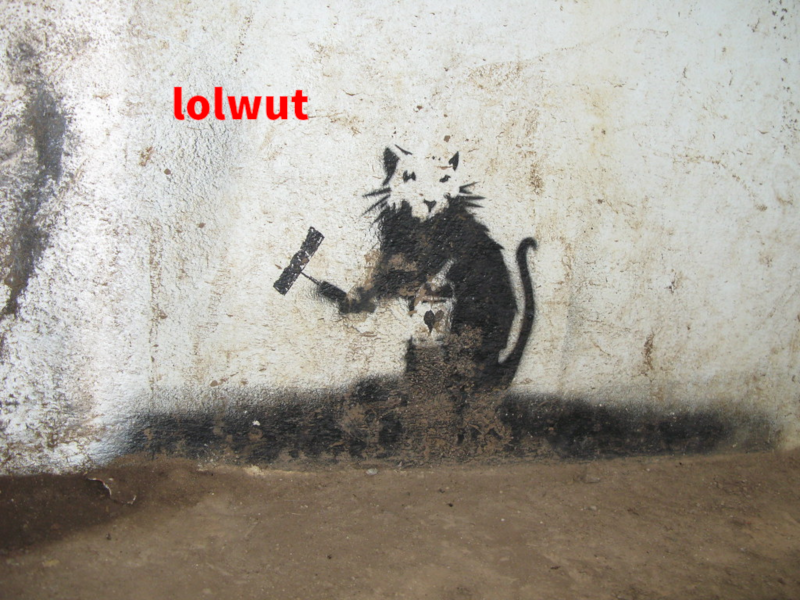 It is unlike almost every official war monument that came before it in its refusal to glorify the war or to portray its victims as heroic. Its attitude to war in general and the war it memorializes in specific is the diametric opposite of that of the confederate war memorials scattered across the south.

“Although (Maya Lin) designed an apolitical monument, the politics of the Vietnam War could not be avoided. Like the war itself, the monument proved controversial. Veterans groups decried the lack of patriotic or heroic symbols often seen on war memorials and complained that it seemingly honored only the fallen and not the living veterans. Some argued that the memorial should rise from the ground and not sink into the earth as if it was something to be hidden. Businessman H. Ross Perot, who had pledged $160,000 to help run the competition, called it a “trench” and withdrew his support. Vietnam veteran Tom Cathcart was among those objecting to the memorial’s black hue, which he said was “the universal color of shame and sorrow and degradation.” Other critics thought Lin’s V-shaped design was a subliminal anti-war message that imitated the two-finger peace sign flashed by Vietnam War protestors.”

“27 Republican congressmen called it “a political statement of shame and dishonor.””

“Secretary of the Interior James Watt, who administered the site, sided with the critics and blocked the project until changes were made. Over Lin’s objection, the federal Commission of Fine Arts bowed to political pressure and approved the addition to the memorial of a 50-foot-high flagpole on which to fly the Stars and Stripes and an eight-foot-high statue of three soldiers sculpted by Frederick Hart, who called Lin’s design “nihilistic.”” -Biography.com

They gave it a big red, white and blue accessory and everybody was happy. JFC

The Southern Poverty Law Center sent me this nicely printed and bound guide to Confederate monuments.

Here’s a link to a PDF version for those saving up for truck-mounted lasers of their own.

Not that lasers are always needed. Many of these monuments (though perhaps not this one) were mass-produced and shoddily erected during the Jim Crow period. 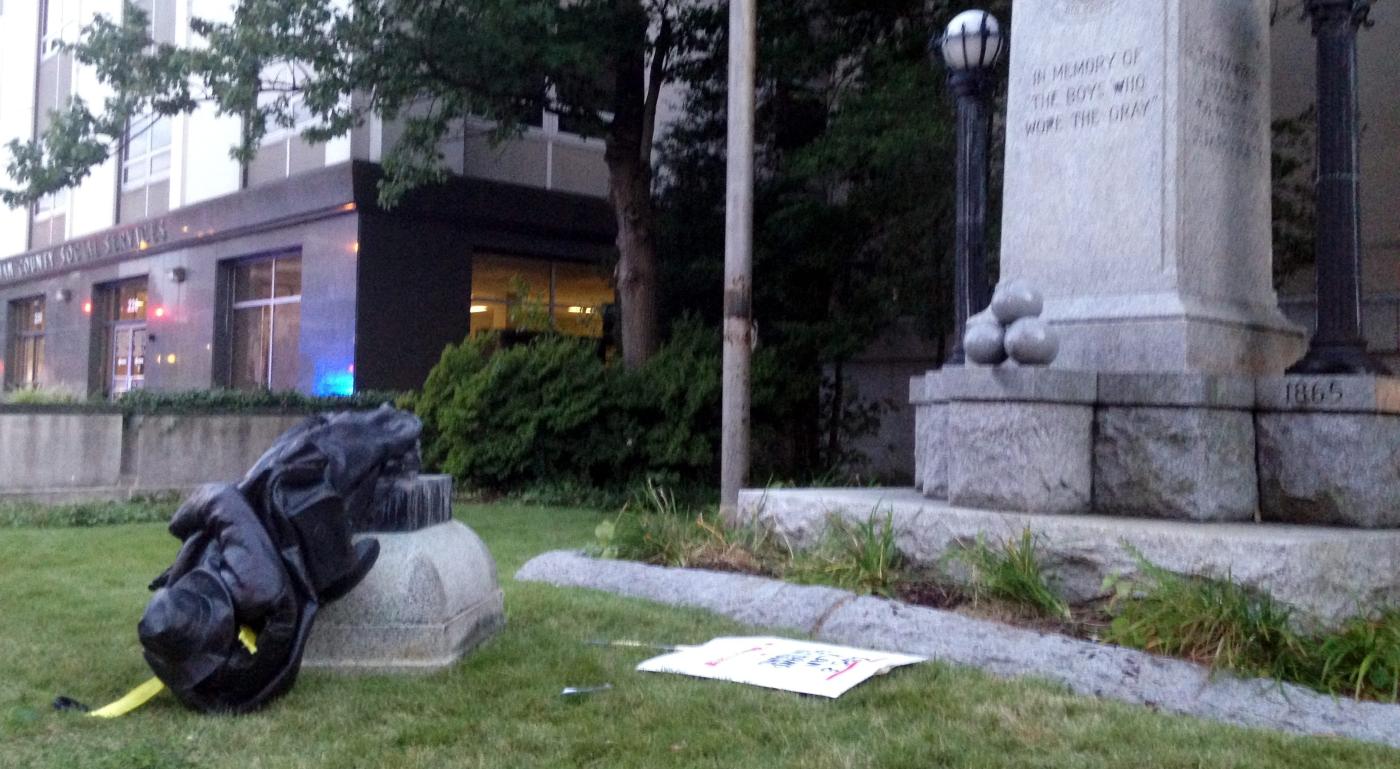 Many Confederate statues across the US South were cheaply mass-produced by factories in the North.

and an eight-foot-high statue of three soldiers sculpted by Frederick Hart,

Note that the Vietnam War Memorial was designed to honor the American soldiers who were sent to die for a cause they had little if any say in fighting for, and certainly not the leaders who sent them there or the cause itself.

If the Vietnam War Memorial followed the example of most Confederate monuments it would have been a big statue of Robert McNamara or McGeorge Bundy.

This is the statue that was defaced; 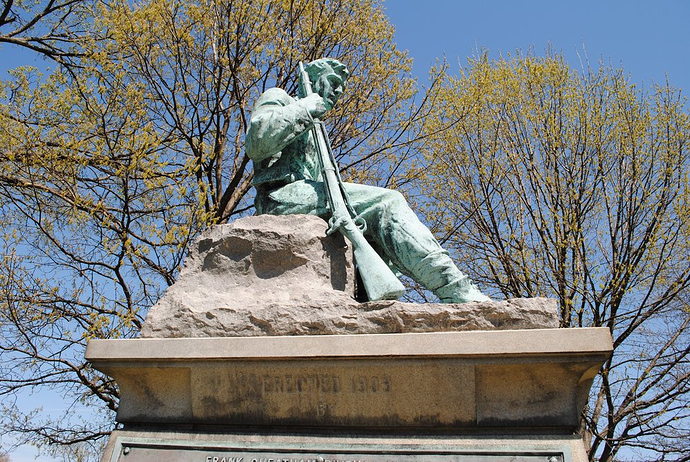 image.jpg999×669 443 KB
As @davide405 pointed out, this is a statue of a “common soldier.” That does not remove it from scrutiny or controversy, of course, but it’s very different in tone than a statue of Robert E Lee. Many soldiers who fought for the south were conscripted, and similarly had little say in the cause they were fighting for.
13 Likes
GilbertWham June 18, 2019, 3:48pm #18

Dangerous electronics is one of your hobbies, IIRC. You should volunteer

As someone from the South, who lived in Tennessee most of his life and who lives in Alabama now, I’m reluctant to accept the “conscripted” defense. There’s too much documentation of enthusiastic volunteering. I’ve often read of the patriotic local leaders who paid for equipping the little local company to go out and fight for the South. Every other little town has a sign about its little troop of dragoons or what-have-you. Sure, the records show that the men soon realize what they’d stepped in, that it wasn’t all fun and games. And there were people in Mississippi, Texas, Alabama, Tennessee who sat it out, refused to fight “the rich man’s war.” But, again, I’ve seen far more evidence of enthusiastic support of the war, support which specifically turned on defending the slavery status quo.

Really, we don’t need any memorials for the people who fought for the South and slavery, whether they were conscripted or not.

Omg, nazi soldiers were people too! Maybe we should start erecting memorial statues to all the fallen nazis decades after the fact in Paris, and Krakow and Brussels!