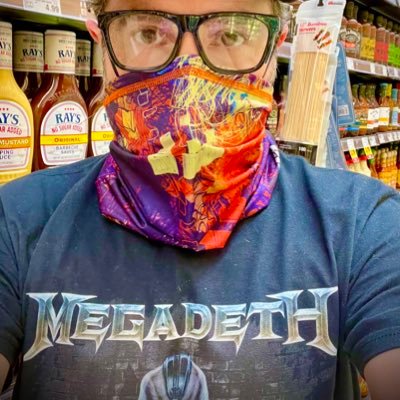 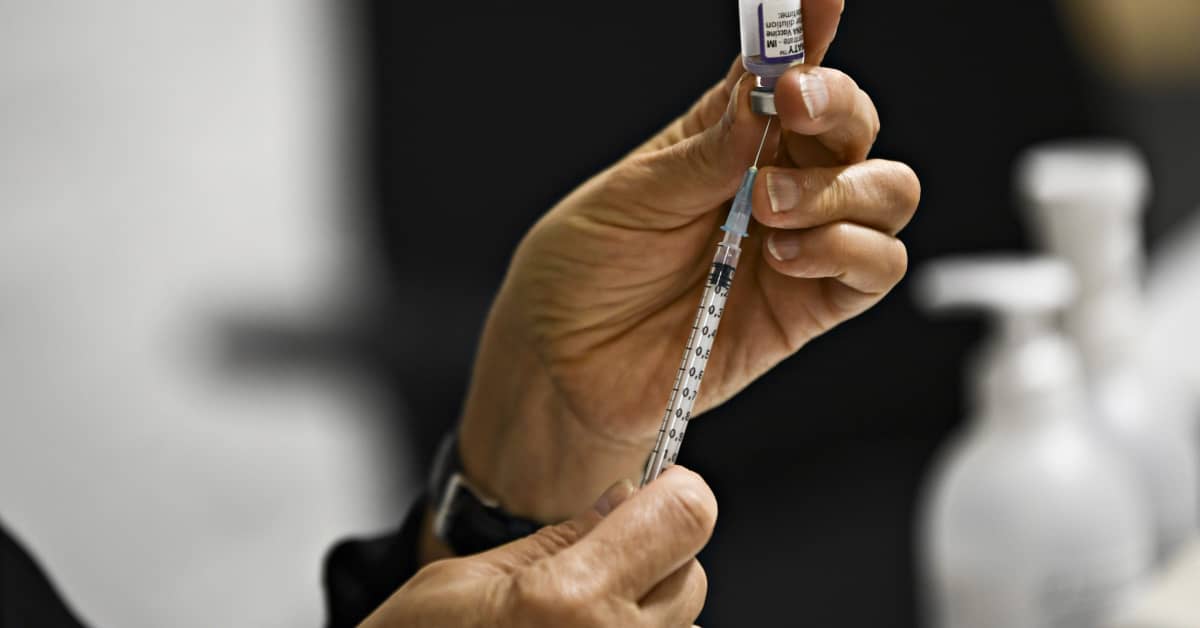 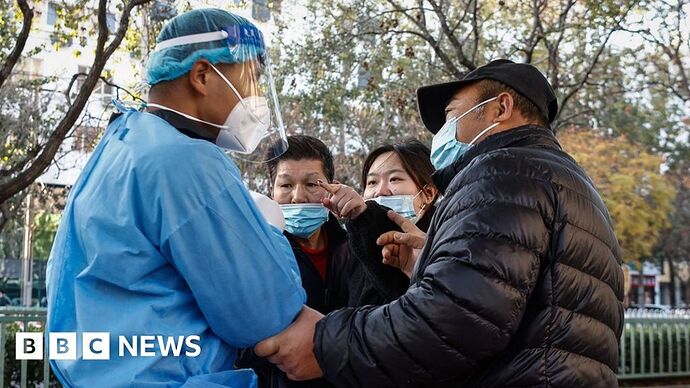 Cases are increasing across the country with the virus now present in 31 different provinces. 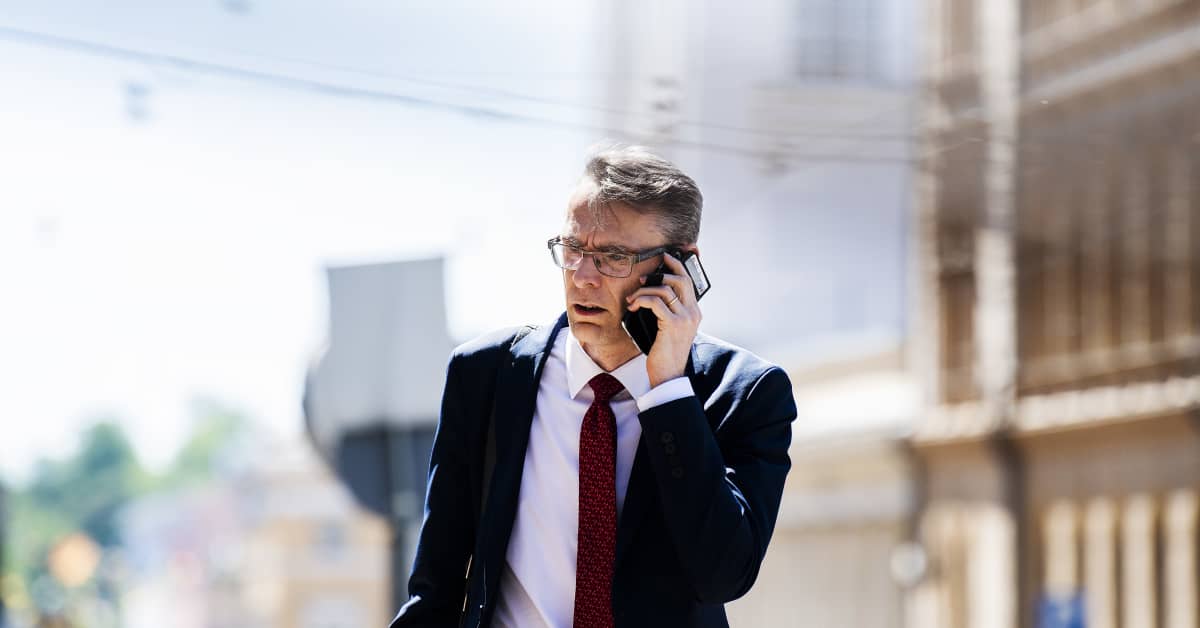 A member of the public asked the Justice Chancellor to find out whether the experts who carried out the research were being kept from voicing opinions about national Covid vaccine plans. 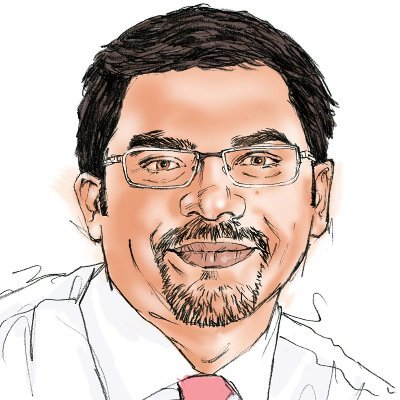 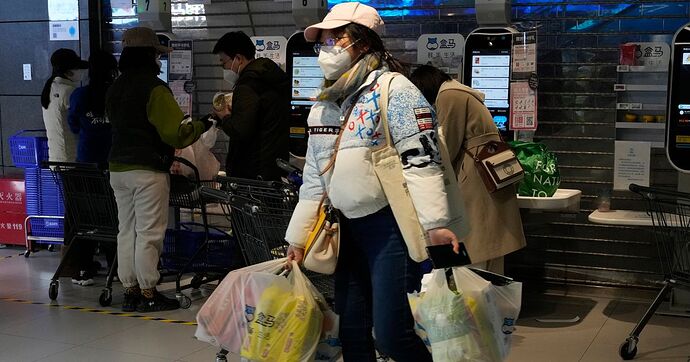 Unconfirmed reports of lockdowns in at least some districts of the Chinese capital have fueled demand for food and other supplies.

I don’t see how they can sustain this. People are dying and local officials are not equipped to deal with this kind of thing on this scale. 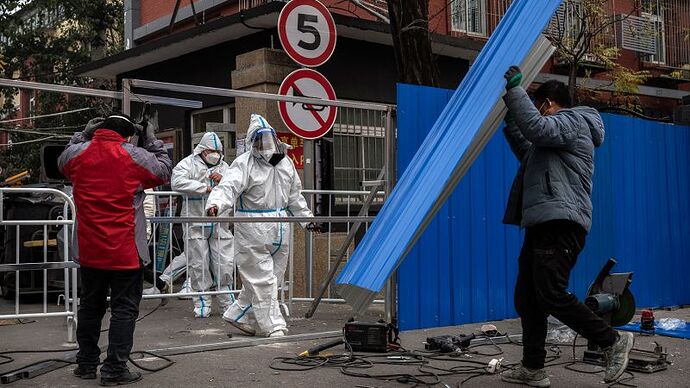 As anger rises and tragedies mount, China shows no sign of budging on...

Zhou, an auto dealer in northeastern China, last saw his father alive in a video chat on the afternoon of November 1, hours after their home on the far outskirts of Beijing was locked down. 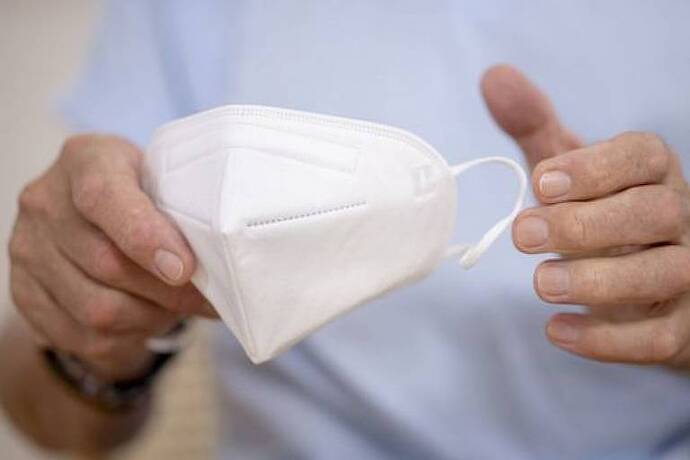 Brazil Reinstates Compulsory Use of Masks in Airports and Planes

And of course the usual suspects are crying “DICTATORSHIP”. 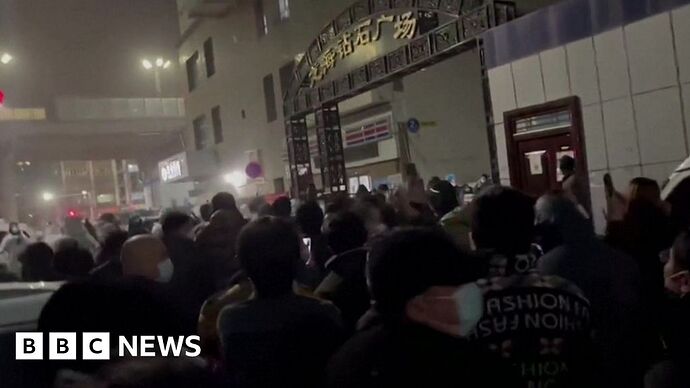 I came across this thread on Twitter from a Dutch reporter. 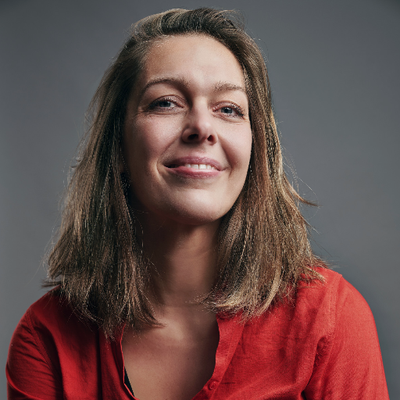 @eefjerammeloo
This is now on Wulumuqi (=Urumqi) lu in #Shanghai. People holding up white sheets of paper. ‘We don’t need to write anything on it. It is a symbol of the revolution of the people’, someone says. (Don’t manage to send videos.) https://t.co/oWwyADTHuX 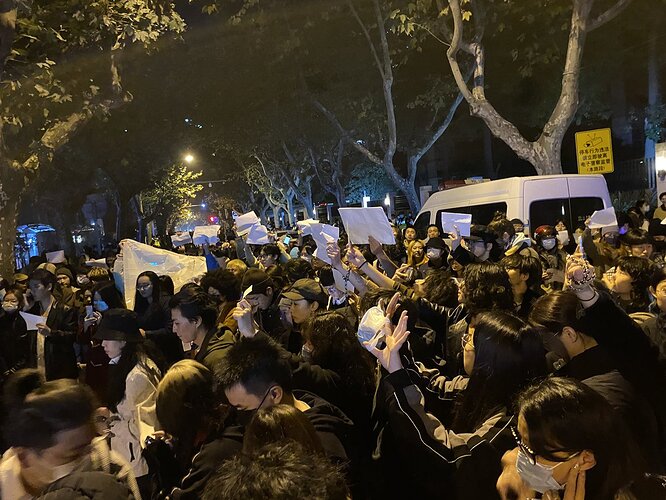 The thread had a shorter split with this post.

@eefjerammeloo
First it was only a few hundred people. But they seem to be coming from far outside the city centre. More than a thousand now, i’m estimating. https://t.co/K8ZXfv94Ny 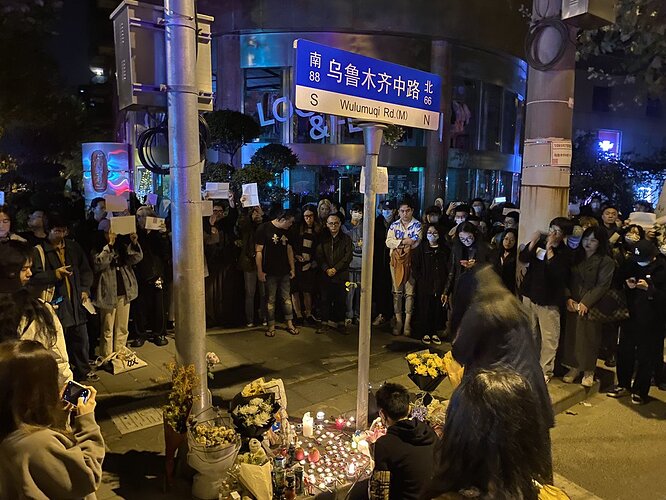 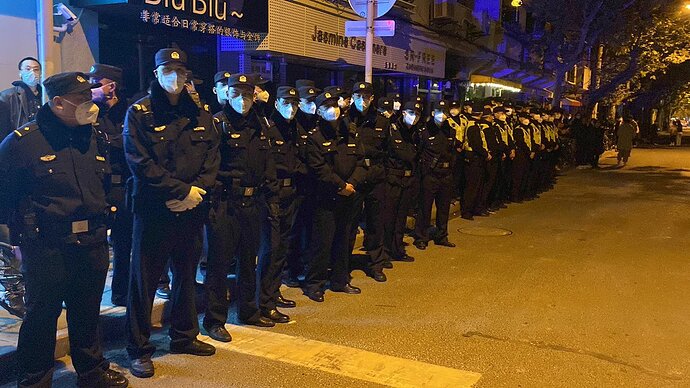 Yeah, seems like things are really reaching a breaking point. 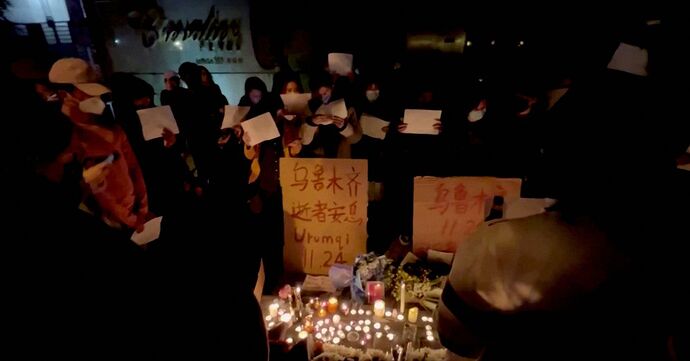 Protests in China against heavy COVID-19 curbs spread to Shanghai on Sunday, with demonstrators also gathering at one of Beijing's most prestigious universities after a deadly fire in the country's far west sparked widespread anger. 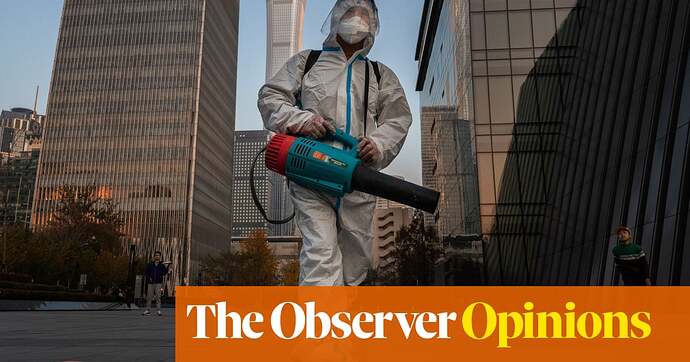 Xi’s iron grip on his country is stopping the Covid U-turn it so desperately...

As the rest of the world breaks free of the virus, China has doubled down on draconian measures

Some good points here, but I will point out a few places where I pretty much disagree with her…

Two years ago, it all looked rather different. Despite today’s signs of weariness and frustration, zero-Covid was hailed as an example of the superiority of China’s system of government.

No it wasn’t. Even people who thought it was a good and effective strategy didn’t think it illustrated the “superiority” of their system of government (tankies and supporters of authoritarian states not withstanding). More people pointed to New Zealand than to China, who had a zero-covid strategy despite having a democratic system of governance. People really need to get out of the mindset that individual policies are expressions of the goodness or badness of a form of government - a particular policy can be good or bad, taken on it’s own merits, even as we put it against the larger context of a particular system of government.

Zero-Covid allowed the government to insist that, unlike western governments, it was keeping its people safe.

Which is, actually a fact. That doesn’t mean that China has a good government along many other axis.

but the emergence of less lethal, but highly transmissible variants, which spread rapidly and often infected without symptoms, made the severe measures – the lockdowns, interruptions to production, authoritarian controls of every aspect of daily life – seem out of proportion to the threat.

I think that remains to be seen, but because it’s not just about how lethal a particular variant might or might not be, it’s also about how allowing a virus to flourish can lead to new variants that are both more virulent and more deadly. That worth taking seriously. The assumption that the virus has reached this point and will no longer mutate is foolish, at best. We understand how viruses work, in generally, and we know that that threat of mutation to a virulent and deadly form is very real. Acting like it’s not is just begging from trouble.

It is difficult to reverse policy in any political system, but it is perhaps hardest in a top-down authoritarian model.

Again, I’m not so sure of this statement. We saw how difficult it was just to get some people to wear masks and get vaccinated. I’d argue that there are different challenges in top-down systems and more democratic systems, but they can be equally challenging for different reasons.

I did rather like that author Jessica Wildfire says “Key takeaway: Covid eats your brain.” 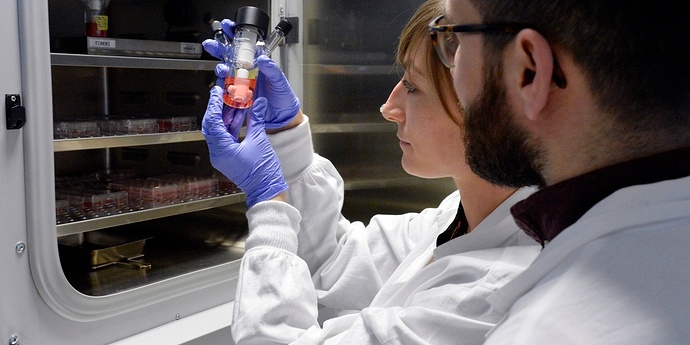 Scientists made mini brains and infected them with coronavirus. What they saw...

An “excessive number” of synapses were eliminated during the course of the disease, “more than you would expect to see in a normal brain,” the authors wrote.

I’d argue that there are different challenges in top-down systems and more democratic systems, but they can be equally challenging for different reasons.

There’s got to be a wealth of calibration data in all of this for some mathematical models of collective human behaviour… keys factors to identify, thresholds for breakdown of order.

I’m a fan of what’s called “stock-flow consistent” macro-economic models, when they’re well done. They capture a lot of detail the Chicago-school type models miss. Surely someone has done some work like that in the social/political/economic space.

Who, me? Ruthless technocratic tendencies, you say? Why thank you…

Personally, I think that constantly trying to create mathematical models for human behavior is a bit of a fool’s errand… YMMV, of course, but as a historian, I find human behavior to be harder to pin down then other types of phenomenon, which is why I think that economic theory has such a problem trying to “rationally” describe human activity. We aren’t very rational, generally speaking.

Surely someone has done some work like that in the social/political/economic space.

No doubt, but I’m not familiar with it. If anything I’d would suscribe to a more historically grounded set of ideas about human behavior that doesn’t assume that human being are the same across time and space (rational actors, shaped solely by economic motives) but instead looks at the larger structures that shape human behavior, how that changes over time via human interactions, and in turn shapes our activities… but maybe I’m coming at everything with my historians hammer?

If anything I’d would suscribe to a more historically grounded set of ideas about human behavior that doesn’t assume that human being are the same across time and space (rational actors, shaped solely by economic motives) but instead looks at the larger structures that shape human behavior, how that changes over time via human interactions, and in turn shapes our activities… but maybe I’m coming at everything with my historians hammer?

I recall hearing some interview on NPR in which people expressed great frustration that economists build their models on the premise that all humans have the same motivations at all times. This was a decade ago or longer, so I wouldn’t worry too much about your viewpoint.

so I wouldn’t worry too much about your viewpoint.

Um… I’m not. But thanks for your “approval” I guess?

Sorry, I’ll rephrase. I think your “historians hammer” is the correct viewpoint because this criticism of economics has come up at least one other time and probably more.