Clay model of the 1965 Chevy Corvair sedan being built up front and center. Would have been an excellent car for GM to have in the 70’s, so naturally GM and Ralph Nader fucked it up so it was gone after '69 and replaced by the Vega. ::sad-trombone

3D rendering was a different thing back then. I’d love to see the set of drawings that the toolmakers used to convert that clay into steel stamping dies.

I venture to suggest that the Corvair was done in by the Camaro - Americans didn’t want weird, they wanted powerful. GM only kept building it until 1969 to thumb their corporate nose at Nader. At least that’s what the Corvair historians have learned.

Yeah, the Corvair was dead before Nader’s book even went to market. 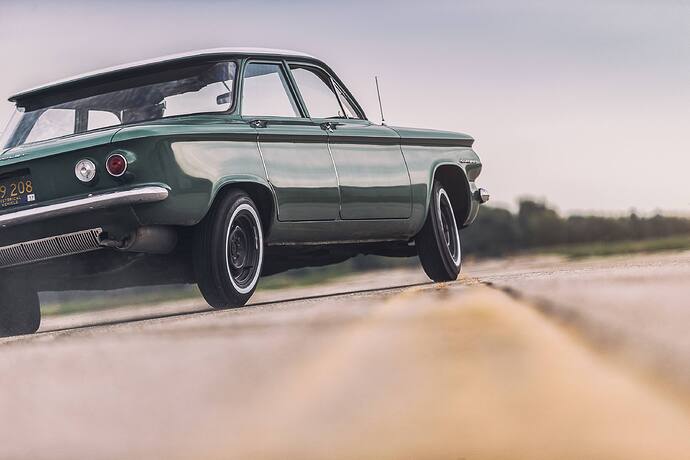 Will the Corvair kill you?

If automotive-safety advocate Ralph Nader is right, what I’m about do has an uncomfortably high percentage of ending in disaster. I’m in a 1960 Chevrolet Corvair, one with a manual transmission and just 39,672 miles on the clock. An expanse of wide... 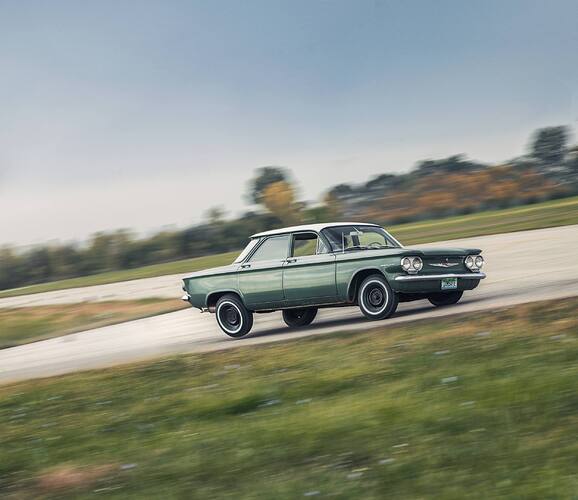 Go ahead. Tell me that’s a safe car for anyone but a pro.

ETA: It’s also worth pointing out that the book had a massive impact on car safety in general and was one of the main reasons that consumers began demanding their cars be at least nominally equipped not to fall apart or punch an iron rod through their chest at 15 mph. If that resulted in a circumstantially dangerous car going off the market, it’s a small price to pay.

A 1972 safety commission report conducted by Texas A&M University concluded that the 1960–1963 Corvair possessed no greater potential for loss of control than its contemporary competitors in extreme situations.[27] The U.S. Department of Transportation (DOT) issued a press release in 1972 describing the findings of NHTSA testing from the previous year. NHTSA had conducted a series of comparative tests in 1971 studying the handling of the 1963 Corvair and four contemporary cars – a Ford Falcon, Plymouth Valiant, Volkswagen Beetle, and Renault Dauphine – along with a second-generation Corvair (with its completely redesigned, independent rear suspension). The 143-page report reviewed NHTSA’s extreme-condition handling tests, national crash-involvement data for the cars in the test as well as General Motors’ internal documentation regarding the Corvair’s handling.[32] NHTSA went on to contract an independent advisory panel of engineers to review the tests. This review panel concluded that “the 1960–63 Corvair compares favorably with contemporary vehicles used in the tests […] the handling and stability performance of the 1960–63 Corvair does not result in an abnormal potential for loss of control or rollover, and it is at least as good as the performance of some contemporary vehicles both foreign and domestic.”

I drive a 1963 Corvair as my main car. It’s way more well-behaved than my other car, a 1958 full size Chevy wagon. I don’t think that handling was the Corvair’s problem, it was that the car was an odd European-style design. The Camaro was designed to accept any engine that Chevy made (except the Corvair engine), so it was a much more versatile base car.

I had one! We got a '71 GT hatchback when it was a few years old, passed it around extended family, then I got it back after I turned 16. My dad had already replaced its engine (himself) after finding out the hard way how easily that aluminum-block engine would overheat.

It served me well; it wouldn’t go more than 65mph (or, whatever rpm that was) without the oil light coming on. (Which was probably just as well, for me.) Though by the time I got rid of it, the oil light would come on at around 50.

It seems it was mainly just pushing boundaries that consumers and related industries (tires, esp) weren’t quite ready for. But the real point isn’t about the Corvair per se, but the general lack of willingness by automakers to do anything to keep their customers safe. This recent Jalopnik article really reminded me how much things have improved safety, maintenance and reliability-wise in the past 30 or so years. Of course, now with the rise of monster SUVs with square hoods, extremely poor front-end visibility and tendency to roll over, they’re right back at their old shenanigans. 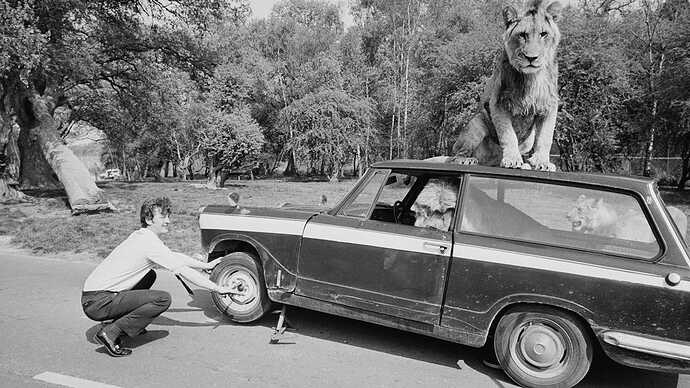 These Are The Old Car Problems You're Glad Don't Exist Anymore

Lots of things about modern driving and car ownership are better than they used to be. Here are some noteworthy examples.

@vector, my point isn’t really that the Corvair was particularly dangerous (though shifting the way a car handles to that extreme is obviously going to cause serious issues for a lot of drivers), it’s that they were all preposterously dangerous and Nader’s book was a sea change in how consumers and eventually the industry viewed vehicle safety. He literally saved millions of lives. 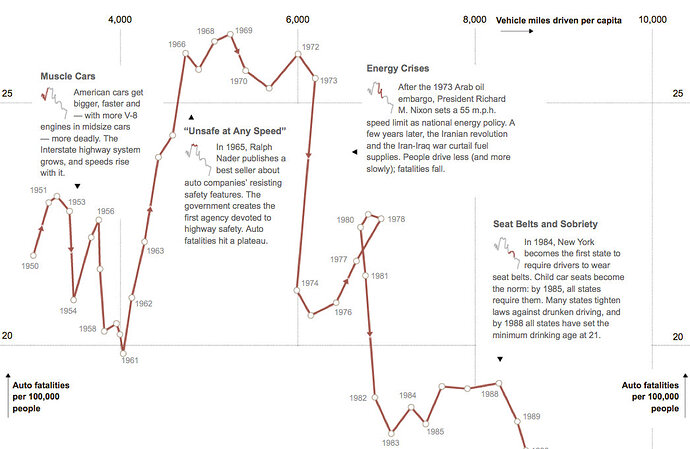 Driving Safety, in Fits and Starts

Auto fatalities have been falling for decades, but in a very interesting plateau-drop pattern.

Of course, the National speed limit had a greater impact, but the per capita death rate when he wrote that book was going off the rails.

Somebody else thought the Corvair’s styling was pretty good. 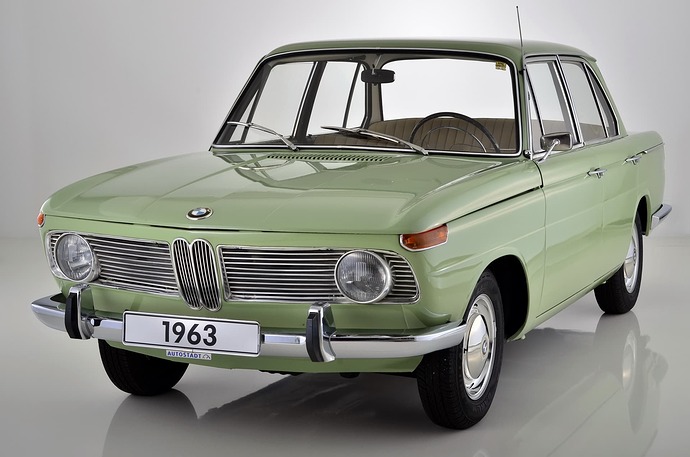 Yeah, the 1st gen Corvair was a huge influence on Euro design. The Hillman Imp and NSU TT were pretty obvious examples also. 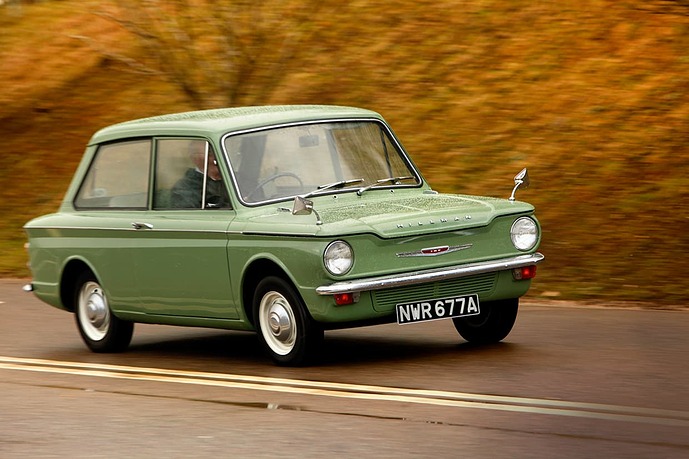 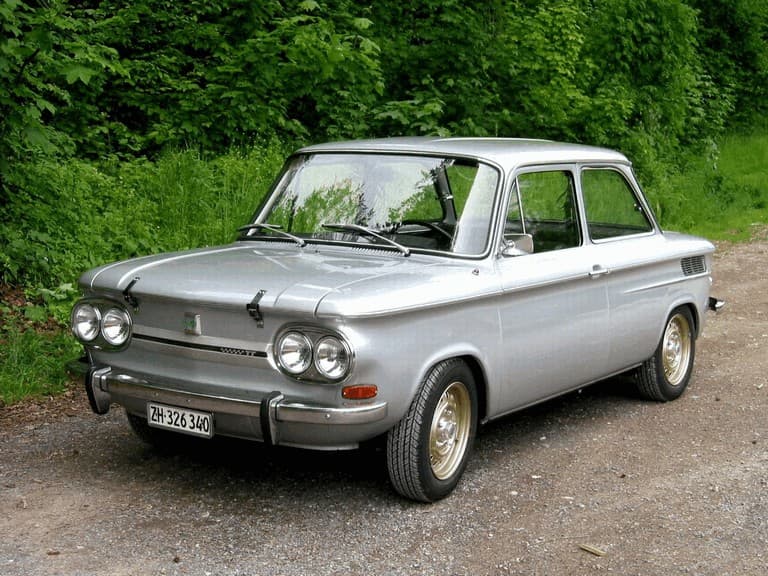 Rear-engine air-cooled flat 6, great space economy, service at any Chevy dealer—it was really a cool car. A high-school friend’s parents had a convertible, and it was much fun. Plus there was the “pickup” variant. 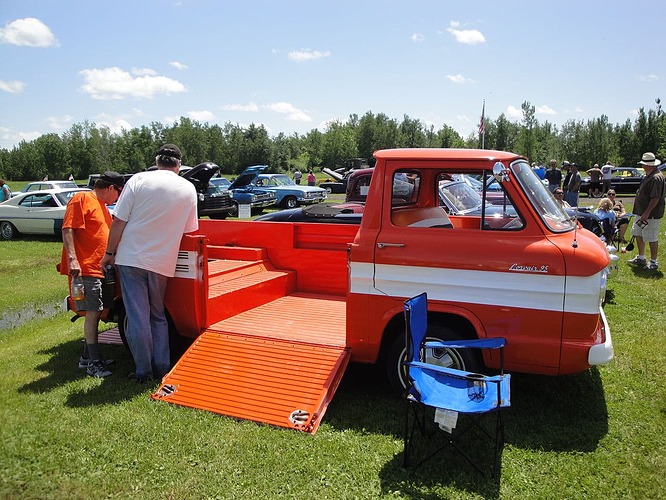 I’ve been looking for a late 60’s Corvair convertible. Collectors are starting to appreciate the convertibles and two door hardtops with Corvairs handling and performance package. A well optioned Corvair is getting pretty pricey. They were pretty good looking and fun to drive cars in their final years. The color options were fun, not all white black or silver and even now the price isn’t too bad.

You just reminded me, I took this almost 2 years ago, during the early days of the pandemic when I was out walking more 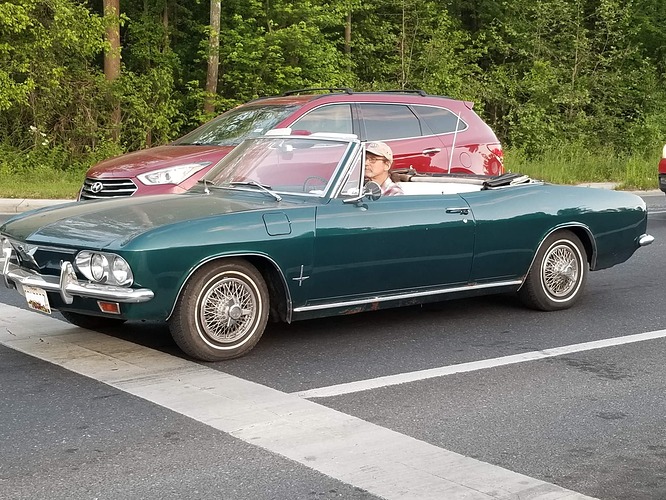 That reminds me, getting back to the topic (sort of), when it said “Cool book of old school car renderings” I thought said book might be one of the editions of Tad Burness’ Auto Album. I had a small Scholastic edition but there’s a larger, more complete edition as well. Anyway one of the more unusual cars in there was the NSU Prinz, of which Burness highlighted its having 2 cylinders. 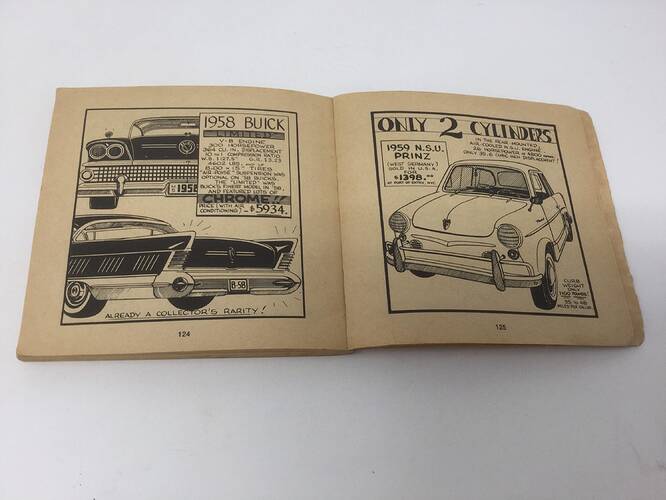 I really wore out my copy, coming up in a fairly automotive family (my grandfather was a mechanic, and my dad & his siblings grew up working at the garage). If it’s genetic then it re-intensified with my son. When he’d regale my father and/or I with some automobilic minutiae (e.g. the mpg on the 2nd generation of Subaru Imprezas vs. the 3rd), we’d respond “oh yeah? Tell me, what’s the spark plug gap on the Hupmobile?” So not long ago, I got him a copy of Auto Album and bookmarked the page with the Hupmobile.

You just reminded me, I took this almost 2 years ago, during the early days of the pandemic when I was out walking more

Thanks, I think thats a handsome old car. The styling holds up really well for 50 year old car in my opinion. Sure beats the clone box SUVs of the past15 years or so. The only problem is I’m gonna be up for a few more hours now looking through all the sites for one. If I find a green one like that you get a free ride.
Edited to add: Years ago I read some silly “automobilic minutiae” about what car had the most poundage of chrome. Seeing that 58 Buick makes me think a full dressed hog 58 Buick was real close to the top. Ask your boy, he may know, or you find out and blow him out of the water with the question.