Reminds me of the Children’s book that Strong Bad wrote back in the day.

Needs work - the cone of concentrated light should have the same diameter as the lens and tapering towards it’s focal point on the ant. Also, the light should be more transparent nearer the lens to simulate the smokes opacity, which will be greatest near the ant. Otherwise the light would be invisible. 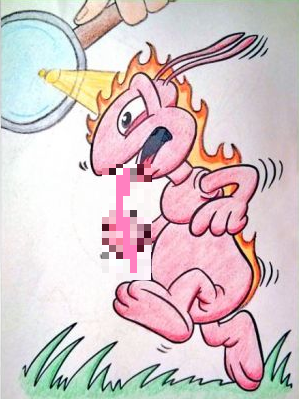 Myself, I prefer the selective pixelization

i think their site is suffering the boingboing,digg,reddit effect

Why would you link to Youtube instead of the original?!?

Only because so many devices these days doesn’t support Flash. Including the one I’m using right now.

So that’s, what, a diverging lens? Somehow I don’t think spreading the rays out is going to hurt anything, dinosaur or no.

My college science fiction club delighted in defacing Chick pamphlets, posters, and such.

We once got our hands on two cheap coloring books. One was a He-Man (or maybe She-Ra?) volume. The other was something like “Mitch and Mike’s Space Adventure,” which started as a slender volume about a moon mission and then was expanded (different artist!) to add activity pages and a FIFTH CHARACTER, a little girl, to add some balance. And the new artist / author couldn’t keep the old character’s name’s straight, so Mitch became Marvin or something like that.

We really went to town on those things. Scatalogical, lewd, violent. And frequently very clever. In one scene, an astronaut was heaving around a giant boulder at waist level. My friend drew an alarmed face on the boulder, added tentacles, and a voice bubble by which the astronaut expressed his delight in porking the natives.

Needs work - The first apostrophe you used in “it’s” isn’t necessary and causes it to mean “it is” as it stands. Also, “smokes” could use an apostrophe so it would mean “the opacity belonging to the smoke.” Otherwise “smokes” wouldn’t be a word.

Yeah, well, this is not a high enough priority that I spend a lot of time on the proofreading or copyediting or even looking for my reading glasses.

Though I personally do wish people would put a higher priority on knowledge of things that actually describe the world than ephemeral things like grammar.

Jake and Dinos Chapman did a similar thing with a join-the-dots book.

Do you know who else didn’t care about grammar?

This article reminds me of the mail order art school where one test of talent was to reproduce the picture of a pirate. Robert Crumb did a hilarious version which I wish I could find.