Covid cases are up but fewer patients are needing ventilators. 5 reasons why

I stopped at #1. Message received: Virus is less lethal. To the bars I go!

My suspicion is a combination of these 3, esp 3 & 5. But as we are seeing in Houston, even at these rates medical systems can be overwhelmed. Wear your mask.

#5 is key, but only holds if the virus doesn’t get into as-yet-unexposed pockets of folks 60 and over.

I’ve used the CT charts below before. Nothing special about Connecticut, it just puts data in a nice format (and the state was hit pretty hard so there is a lot of data w/out the influence of having ordered COVID+ folks into nursing homes. (The opposite, really, though still many deaths among LTCF residents.) 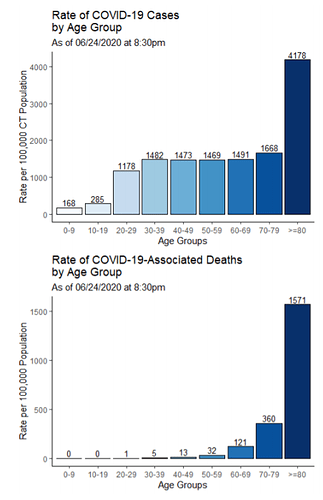 I stopped at the photograph. I hope that nurse is not actually treating a Covid-19 patient. No mask, no gloves, no gown… Might want to spend a moment or two on the stock photography selection process.

Have treatment protocols gotten better? Another possible explanation is that as doctors have gotten better at treating, and more testing has lead to earlier detection we may actually be stopping some cases from getting bad enough to warrant a ventilator.

Anyway, even from the beginning the ventilator shortage was… not quite a red herring, but almost. Ventilators seem to be less effective for COVID19 than maybe expected, but even for other severe respiratory infections ventilators are basically a last-ditch effort with a low success rate unless they were used with some other treatment for the underlying condition. Ventilator shortage made for good headlines because it is so dramatic and we love miracle machines, but ventilators were never going to be the make-or-break thing for COVID. The shortages of PPE and tests were much more serious, and while testing got some attention, the shortage of PPE for hospital workers and those at higher risk got almost submarined under the made-up controversy of “should average people wear cloth masks”.

I’m not saying the ventilator shortage wasn’t or isn’t a problem. Just that the huge focus on it seemed disproportionate and potentially distracting from simpler more effective measures. Back in late march especially the news was all about how if GM and Tesla could just build us enough ventilators, everything would be OK. Meanwhile who even that Ford was producing battery powered respirators to protect healthcare workers?

it’s not less lethal at all

they just figured out better drugs

Are there data to support this? It was basically the UK blueprint back in March and look where it got them.

The virus is a lot more dangerous than the flu. Even in pre/asymptomatic cases, there is evidence of lung damage.

I’m not saying the ventilator shortage wasn’t or isn’t a problem. Just that the huge focus on it seemed disproportionate and potentially distracting from simpler more effective measures.

Hell no. Just the view from my rarefied perch.

It’s got to be some combination of the following:

I’m still baffled that deaths are remaining so low. I think that means CFR is approaching IFR but I’m no epidemiologist.

This has been a major motivator for me, a 39 year old, to play it very safe since the very beginning. I have no desire to be inflicted with possible life long lung issues, even if mild. I don’t know why the people who keep comparing this to the flu (which is obviously not a correct comparison) don’t understand this, the flu doesn’t generally have the possiblity of giving you a life long annoying (or worse, debilitating) reminder that you had the flu that one time.

To call the ventilator count a “red herring” is not exactly correct. It became a very visible indicator, leading to people’s better understanding of “flattening the curve”, which, in turn, led to people* taking the crisis more seriously. (* At least among people with the capacity for logical thought.)

Back in March ventilators were known primarily as the last stage of life support for those with the most serious forms of the disease, and because so many cases were developing so rapidly, it was impossible to predict which of the treatment options would prove to be bottlenecks. So they tracked ICU beds and ventilators, which are both in very limited supply, and given the unknown rate of spread, they certainly were (and still are) a capacity risk.

With the latest round of people exposing themselves has led to infection rates spiking by a factor of five, the failure of federal leadership in response to the disease, and some states still failing to take the threat seriously, it’s possible that a ventilator shortage may yet become an issue.

. It became a very visible indicator, leading to people’s better understanding of “flattening the curve”

Well, the “flattening the curve” message was also hugely unsuccessful, basically a disaster in my opinion. It was only ever presented in a “lets spread cases out to not overwhelm the hospitals”. i.e., getting infected was seen as inevitable, and countermeasures were only delaying. It really sounded – even listening to supposedly reliable sources – like everyone was going to get COVID, some fraction were going to get hospitalized, and some fraction would die, and that all the shutdowns, social distancing, and testing were going to delay things but not make a huge difference in those numbers. “Maybe if we flatten the curve I won’t get denied a ventilator when I am probably going to die anyway, but I’d rather not spend the next year under self imposed house arrest and die anyway.” I think this led to a lot of the resistance we saw to shutdowns and social distancing.

Lot of people, even people strongly advocating good public health measures basically believed this story and it is wrong.

While the WHO and others very quickly realized that SARS and MERS like containment where the virus would be completely eradicated before spreading worldwide was impossible, the goal always should have been to use shutdowns and social distancing to suppress the initial spike (caused by the reaction delay) until the infection rate is very low, then use tracking and tracing to keep it low. The result would be a dramatic reduction (10x) in the total number of people who ever get infected assuming we get a treatment or vaccine eventually (even in 2-3 years, rather than the more optimistic 9-18 months). And if we could succeed in suppressing the infection rate to a manageable level and having effective testing and tracking, we could do that without having to have extreme social distancing for those 2-3 years.

This is now not really the path the US is on. The US is on a path to have herd immunity and millions of deaths. But the alternative was hardly ever even presented as an option, and flatten the curve I think encouraged a fatalistic view that a lot of people have of COVID that is counterproductive.

the flu doesn’t generally have the possiblity of giving you a life long annoying (or worse, debilitating) reminder that you had the flu that one time.

This just sent my brain on a tangent, and now I believe I grok why there was the recent push to eliminate preexisting condition protection in the ACA (if not completely destroying it). If/when we finally have a handle on COVID-19, insurance companies will be able to deny coverage to anyone who was damaged by it but didn’t die. Win-win.

#5 is key, but only holds if the virus doesn’t get into as-yet-unexposed pockets of folks 60 and over.

Even in pre/asymptomatic cases, there is evidence of lung damage.

The more I read about covid-19, the less I want to get it. There’s evidence of not just lung damage, but also heart and brain damage and even damage to insulin-producing cells that might lead to diabetes. They’re still figuring things out, but it looks like a lot of people are going to end up with serious, life-long health problems as a result of this. On top of which, people who are infected - particularly asymptomatic carriers - may not receive long-lasting protection from it. Which could mean that you could get infected, over and over, until you get seriously sick…

On top of which, people who are infected - particularly asymptomatic carriers - may not receive long-lasting protection from it. Which could mean that you could get infected, over and over, until you get seriously sick…

THAT is the real flaming hell of this disease. If there is no immunity development, that means that from now on, anybody’s cough could be a threat to your life. Can you imagine wearing a mask all the time every time you leave the house for the next 30 years? We better all start praying damned hard.