Crossword puzzle that looks like a swastika is definitely not a swastika, swears the New York Times

Originally published at: Crossword puzzle that looks like a swastika is definitely not a swastika, swears the New York Times | Boing Boing

I kinda agree with NYT here. That looks to me like they did a spiral pattern, and (since they knew what they intended) didn’t realize it could be seen as holding a swastika, too, until someone pointed it out.

I can see the resemblance between the shapes but the Times is correct, it’s not actually a swastika. For one thing the lines in the middle of the swirly shape don’t intersect each other at a 90 degree angle. 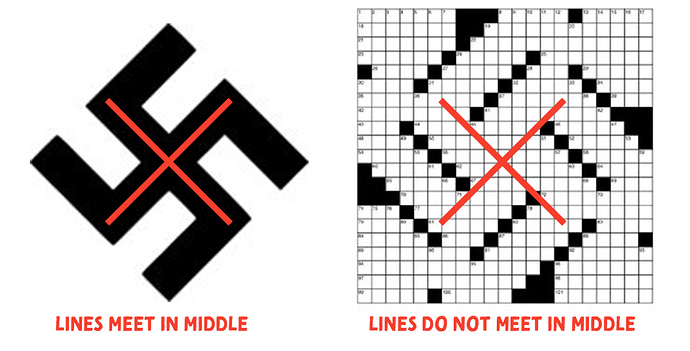 I think there’s only so many crossword layouts you can make within a square grid before some of them start to bear at least a passing resemblance to recognizable symbols.

All daily NYT Crossword puzzles are rotationally symmetrical. Usually just 180 degree, but sometimes 90 degree. I suspect the more symmetric ones are considered “better work” so get prime placement… like around holidays.

There’s only so many ways to fit 4 fold rotational symmetry into a square.

The New York Times’ crossword puzzle looks like a swastika.

I think this is were the subtle difference btwn “resemble” and “looks like” matter if you’re going to pick this battle.

I don’t want to seem sanctimonious here but it doesn’t matter at all if it was intentional or not. It’s an offensive accident then. Apologizing and pulling it is the appropriate response. I work for a large corporation where we create apparel/footwear and there have been times when a pattern for fabric has been selected and later we realize within the swirl of interlocking shapes you can make out a swastika shape. It being unintentionally within the design doesn’t mean we would ever print it and if it was not caught and went out that way we would pull it as soon as it was brought to our attention. It’s the obviously right thing to do.

Is no-one going to complain about the grocers’ apostrophe?
“Some Theme’s (sic) Missing” for heaven’s sake! They are journalists! They are crossword setters! They should know their grammar even if they are confused about swastikas!

Yes, hi. It’s NOT a swastika. Honest to God. No one sits down to make a crossword puzzle and says, “Hey! You know what would look cool?”

I know who would sit down to make a crossword puzzle, and say, “Hey! You know what would look cool?” Nazis, that’s who.

The “Nazis next door” that the NYT reports on would love it, except for the fact that they’re more Highlights Hidden Picture puzzle types than NYT crossword solvers.

In fact all crossword puzzles are traditionally so (which doesn’t mean all of them are, but it is traditional for them to be). So much so that Games magazine used to run their unique “blockless” crosswords. You had to figure out the black squares yourself, which you could deduce because of the radial symmetry rules of crossword blocks.

As you say, the odds of creating a radially symmetrical square shape that’s vaguely swastika-adjacent by accident are pretty damn high.

This is people looking real hard for something to be mad about.

Sometimes a cigar is just a cigar.

There are legitimate structural reasons to use such rotationally symmetrical designs - ultra-high precision voltage references use a swastika like cut-out in the circuit board as a method of de-coupling thermal and mechanical stresses in a way that is equally distributed across the plane : 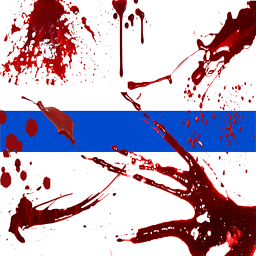 Why do they make traces to LTZ1000 in spiral shape? 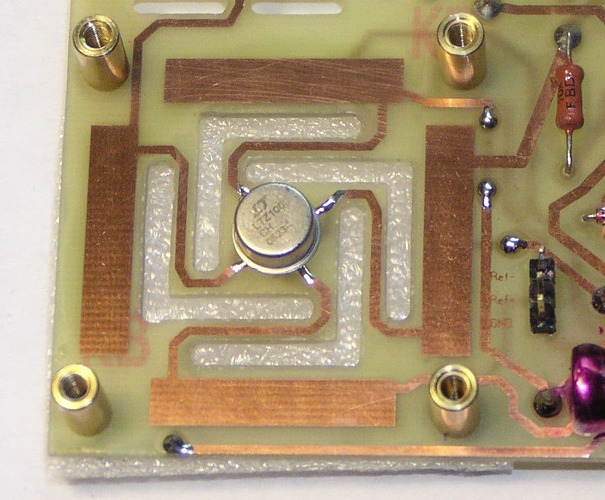 These are parts that CERN uses in the LHC for some of the most sensitive measurements short of requiring superconductors and elaborate cooling methods.

(That said, I’m not sure that a newspaper crossword puzzle is one of those cases - they might have anticipated there would some blow-back from that layout).

I do their puzzles regularly (I know, get a life) - it took all of 2 seconds to notice the pattern.
These things are edited to death before publishing, so no chance it wasn’t noticed.
I’m pretty sure Jewish people are a major constituency of the NYT puzzle solvers. Hubris/arrogance to publish, especially this time of year.

oh good LORD. yes, by all means, let’s tilt at ALL the imagined windmills.

Well, it could mean “some theme is missing” - which would be equally bad writing, in this context.

So, yeah, they should know - and do - better

…It does mean “some theme is missing”, and it’s phrased that way as a pun on “something’s missing”. You can find that funny or not, but I have no idea why it would be considered bad writing.

Why bad writing? Well, because outside of the weird minds of crossword setters it looks like convoluted usage (so, par for the course, for them). In normal writing why not just say ‘a theme is missing’.

But nothing is normal usage where crosswords are concerned.