Crows trained to collect cigarette butts on the street

Fascinating that it’s apparently easier to train birds to pick up litter than train humans to stop dropping it.

I just hope the birds don’t learn how to smoke.

Just FTR: I doubt they will just collect cigarette buts. As soon as they figure out how to trick the device, the whole thing is over.

I can’t be the only one who saw the headline and mis-read it as “cows.”

You are not alone in this wretched world.

They’re helpful with a light already. 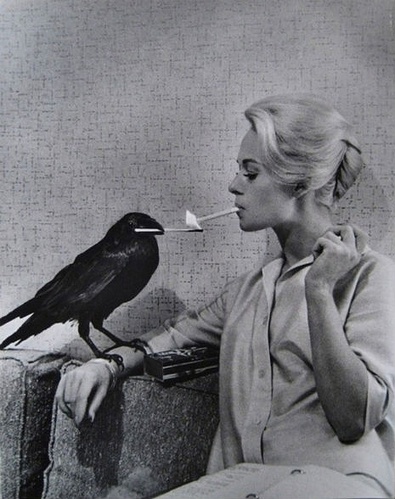 Tippi Hedren getting a little help (probably a promotional shot for The Birds.)

My first thought was that they might start ambushing smokers for their still lit cigs. So, avian smoking cessation project?

In an earlier project people taught crows to pick up any kind of trash. Worked fine until the crows realized you could tear a piece of paper in half and get two rewards.

Or they could - you know - train people not to litter.

I find it incredible that this is somehow a “socially accepted” form of littering.

good, when we have this down let’s train crows to punch nazis in the face.

you know - train people not to litter .

You mean the exact same people who refuse to wear a mask and get a vaccine in a pandemic that’s killed about a million people in the US? Those people?

Oh, to live in a country that has so little trash that cigarette butts make up most of it! I did notice that Sweden is a very tidy country, but that statistic rather proves it.

Fascinating that it’s apparently easier to train birds to pick up litter than train humans to stop dropping it.

As soon as they figure out how to trick the device, the whole thing is over.

Yep. They are absolutely smart enough that they will very quickly learn all the ways of gaming the system.

I can’t be the only one who saw the headline and mis-read it as “cows.”

When there were news reports about studies done with New Caledonian crows showing just how smart they were and how adept they are at making tools, some British tabloid ran an article where, they started off also making that mistake, they then doubled down on it with lots of synonyms for cows, so breathless reports of these “heifers” making tools (with their hooves, I guess?) and so on.

I find it incredible that this is somehow a “socially accepted” form of littering.

Especially since it’s rather a nasty form of litter - poisonous and non-biodegradable. (Which is why it’s litter in the first place - the people producing the butts don’t want to have to deal with collecting, holding and then properly disposing of the nasty things.)

I used to do a lot of hiking – Appalacian trail, week-long hikes in the Sierra Nevada and Rockies – and every time I found a nice vantage point off the trail, a camping spot, a bunch of rocks to sit on for a minute, I’d look around and see cigarette butts. Even if you could otherwise swear that the spot had never been visited by man, look down and there it is – butts everywhere on the ground. I visited an island once, one which you had to get a special permit to visit and explore, and even there butts were in the sand of the beach, all along the trails, and almost piled in drifts at the highest point on the island, which had an excellent 360 degree view.

Remember when beverage cans were a major souce of litter? We solved that, for the most part, with deposits. Do the same with cigarettes – yes, I know they’re already taxed half to death, but if you could get back $.05 per butt, treating the world like your ashtray would soon diminish, and those who just can’t be bothered or who enjoy littering will at least be making some poor kid’s day by leaving money on the ground. (I’d also like to see this for bullet casings, but that’s a rant for another day.)

Humans: forget not smoking, we can’t even be bothered to not litter! Same humans: we have no problem whatsoever relying on someone else to train birds to pick up after us. Pathetic. 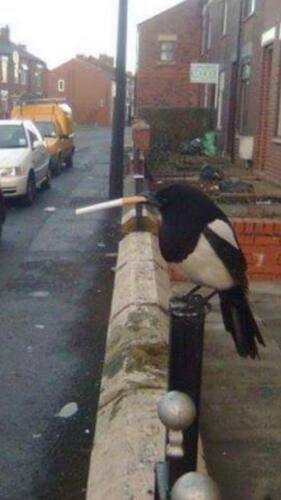 Cigarette butts are disgusting and absolutely stink. Nobody is going to save them up to return them.