Can you share any more with us about your experience with the show?

End of an era in some ways… especially when it comes to Richmond, VA. 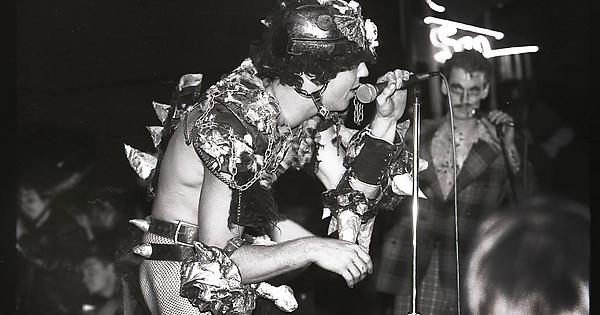 Oh, and one more…

Oh, and this odd thing happened almost one month before he died…

I knew Dave in the mid-1980s, and crashed at punk/art houses where he and co-creatives practiced and built props for GWAR

I was a little younger than the GWAR guys and didn’t come up to Richmond until I got out of my short stint in military school (well-deserved tween prison). I only went to one GWAR show, but enjoyed it and had insane things happen later (long story). Went to the slave pit a couple of times.

Almost got into a fight with Brockie at a party over him not sharing a joint with me and being his usual cocky self. Later, I got to know some of the band through friends and we mountain biked on the crazy-steep trails at Belle Isle together.

The thing I remember most is they pretty much acted like normal dudes in my experience with them. Cocky, but humble at the same time in many respects. I mean, there was some weird shit I won’t mention here, but at least by my fucked standards they were normal.

Very much the same with Dave Grohl who seems very nice. I sat and chatted with Dave Grohl about my surfing plans at the notorious Mexicono House in the 90’s when Dave G. had a house out there. I didn’t know who he was until a friend of mine who was dating his sister (oh, god… long story I’ll never tell) told me later. Without knowing who he was, I asked his name and he just nicely told me, “Dave.” and I went on to chat with him about where I was surfing in the morning, etc. - I wasn’t much into pop culture, TV, radio etc. and spent a lot time doing subversive projects, surfing, mountain biking, etc. and pretty much only listened to hardcore cassette tapes at the time so I was mostly immune to knowledge of mainstream bands. I think he found it perhaps refreshing that I didn’t know who the hell he was during the Nirvana craze and just treated him like anyone else I’d meet. Shit, nostalgic digression overload…

I have old friends and aquaintances that are simply just crushed today. Dave Brockie meant a lot to a lot of people who have perhaps different values than the mainstream who have disposable celebrities that have handlers and are always kept at arm’s length. He wasn’t always the easiest to talk to (the cocky thing), but I think even people who got rubbed the wrong way by him still respected the core values he held onto that so many others trash whenever the opportunity arises.

Well, hopefully Justin Beiber is ready to take his place at the helm of GWAR now. I’m sure Dave Brockie would’ve wanted it that way.

Ah GWAR, good times at City “Shitty” Gardens in NJ. Fun story that happened to my friends and I while traveling back on the PA Turnpike. When we came to the toll booth the woman collecting the money took a double take and freaked out asked if we were alright, was there an accident. We were covered is so much fake blood, dough, and other crap GWAR shot from the stage that night. People were sitting on tarps and beach towels.

To top off the evening we had to sneak one of our friends back home. He had lied to his mother that he was working a wedding reception as his sisters photography assistant, she also came to the show. After a long shower and scrubbing he finally was clean enough that he could get back into a suit and tie. His body was stained the rest of the week and he wore long sleeve shirts the rest of the week.

When I was younger, and poorer, I dumped cement into a small bucket and used that as a canoe anchor.

We called that anchor “Gor Gor.”

I see those pictures from Shafer Beach and can’t believe we were ever that young. Those Death Piggy shows were so wonderful, Death Piggy were like our house band. And Dave was a stand-up guy. Once at some apartment on Grace St Death Piggy was playing. Dickie Disgusting was being an asshole and hassling me. Dave stepped in and stood up for me.

I’ll never forget the first time I met him. Derek had a birthday party the first week of classes. I was with Bart, Gallelli and Bobst the Elder out back doing elicit things. Dave walked right up to us like we had been friends forever. I remember him telling us he was a cartoonist. He said in his deep Brockie voice, “I’m a cartoonist, that’s what I am.” I was like sure dude, whatever you say. But he was. He made some great flyer/handout/foldouts he used to distribute. Death Piggy the logo was first rate branding. It was easy enough to draw and memorable. I drew that sucker every where. Death Piggy lyrics were often surreal and GWAR was a cartoon on a grand scale in amazing 5D.

They cut our assholic PM Tony Abbott’s head off on stage last month. Sadly it was just an effigy. I will forever be indebted to Dave/Oderous.

No one escapes GWAR!!!

So I was on Google News just now and saw a headline: “Aborted babies incinerated to heat UK hospitals”. I clicked on the “See realtime coverage” link and was taken to a list of articles about the lead singer for GWAR dying. Somehow it all seemed to fit together.

Xeni, my condolences for your loss.

Also, bummed that I will never get to see Amy Grant open for GWAR. That would somehow, someway be a show to remember.

Sadly, it never made it to the Internet, but one of the best page designs that ever happened at my college paper was for a GWAR show. Front page, above the fold, with spatters of blood exploding out of the photo and all across the other articles. We got so many complaints and it was wonderful. Salute to Dave Brockie, whose artistic vision could inspire dumb kids to do cool things even decades after he originally came up with the ideas.

In honor of his passing, it would be cool to have a BB retrospective of the fertile Richmond punk and rock scene: Avail, Candy Snatchers, Seymores, House of Freaks, many more…

Man, he sounded like an awesome guy! Thanks for sharing your memories of him and Gwar performances, everyone. Clearly, he was going to be missed.

I never met him, but I did have a short conversation once with Slymestra Hyman @ DragonCon backstage. She liked my tat… It was at DCon that I saw them perform.

I remember being at a party at some house in the Fan in fall 1983 and him drawing cartoons on my arm with a Sharpie. I think that might have been during my brief fake British accent phase. Fortunately Facebook and cellphone cameras hadn’t been invented yet!

It’s tough - Dave helped a lot of bands get their asses together, gave so many people chances to get a real tour under their belt, and never sold out. I’ll never forget the first time I saw GWAR in costume - just boogieing down Grace Street with a camera crew in front of them, and a whole pile of VCU cops in pursuit.

It’s up to us, now, to keep pushing, making sure the weird-shit-o-meter in Richmond keeps getting cranked further and further into the stratosphere. The only way to honor him, frankly.

In honor of his passing, it would be cool to have a BB retrospective of the fertile Richmond punk and rock scene: Avail, Candy Snatchers, Seymores, House of Freaks, many more…

Isn’t it enough that I set afire a bum’s shopping cart as a funeral pyre in honor of his passing?

I’m more worried about what this kid is going to do now that Brockie (and GWAR?) is gone.