If you think that was a threat, I think you must have actually been threatened in your life.

I think in the context of being put on Reddit it’s a funny meme that everyone can laugh that features footage of the current president beating on a cartoon villain but with a CNN logo over his face that serves as commentary on the animosity Trump displays toward CNN.

In the context of being repeated by the sitting president through what he has made clear is his ‘official’ social media account, who has been a vocal critic of CNN’s content for over a year, and who has taken concrete steps to reduce the press’ ability to cover his administration, it is absolutely valid to interpret it as a covert threat.

Because of that difference of contextual meaning, though, it means the creator’s intent and therefore the creator is immaterial. His bigotry only matters in the context of the subreddit as a whole being a source of content for the president, not on a personal level, and it wasn’t necessary to personally pursue him except in a self-serving demonstration of power that almost exactly mirrors that of Trump tweeting it in the first place.

Plus, since the election we’ve had one reporter given a seizure by a flashing .gif and another assaulted by a congressman. Having the president stir the pot is unlikely to help when hostility to the media is already boiling over into actual violence.

I…don’t really think any of that’s relevant to the issue at hand. It’s certainly all true and interesting in the broader picture, but Ken has a pretty damn clear point that people excusing CNN’s behavior here is absolutely an erosion of stances on free speech and what constitutes blackmail or threats.

To make my stance clear, I’m vehemently opposed to the current administration and STILL my first thought on this was ‘I guess someone told CNN that Trump did the worst things possible in the political news cycle and they went ‘oh really? Hold my beer.’’ It being added by editors or whatever does NOTHING to excuse this. Either consider the guy newsworthy and publish his name, or don’t. Holding it in reserve makes this absolutely blackmail to me and unworthy of CNN’s pedigree.

Yeah, didn’t deconstruct this much. Both his orange-ness and #bigmediaoutlet didn’t clear the bar here. Hard to get worked up considering the avalanche of awful we’re already buried under.

Once More Around the Trump Bullshit Merry-Go-Round

Escaping the shrieking maw of Twitter aboard the hashtag #CNNblackmail, a story started circulating today about the news network threatening to release the personal information of a 15-year-old who made a gif tweeted by Donald Trump. Every one of...

What’s a good way to say “We won’t release his name because it’s not newsworthy, but we don’t agree to never release it depending on future actions and events”?

I’m still confused how this is a free speech issue, especially when the charge is that CNN is using coercion to silence a critic which is doing a bit of a dance to get that argument to stick. If CNN, an objectively mediocre news source, decided to ever actually target an individual for harassment they have everything to lose and nothing to gain. They have legal representation to actually silence people behind closed doors when they so choose, but instead published the decision to expressly not Doc a user with a rider saying it’s non-binding in an awkward way. “We have decided not to doxx an asshole, but this statement is not legally binding” doesn’t change the message but is equally inflamitory, but without the context that CNN isn’t going to doxx a guy that responded with an apology and deleting his account. No matter what they wrote the opinions surrounding what their intent would be won’t change, it’s not like the same people making the same arguments even bother to hold all media to the same standards for one reason or another.

The only other thing I hear is that the story is in no way newsworthy, which is also bunk since once the president retweets a meme (and this including it in the annals of our countries most well-preserved history) that meme is news and he source is a big deal. Hell, given the general attitude to dismiss how there are places in the internet astroturfing memes into effective and decisive political tool the subject is pretty important right now.

I propose splitting the difference with a 10-year-old.

And now: Whitehouse advisers have discussed using Time Warner’s pending merger with AT&T as a point of leverage over CNN.

I’m all in favor of denying the merger. IIRC, blocking the merger was one of Don the Con’s campaign promises. But using it as leverage to bring CNN to heel is the kind of straight-up malfeasance that we’ve all grown to loathe and expect from Cheeto Mussolini. 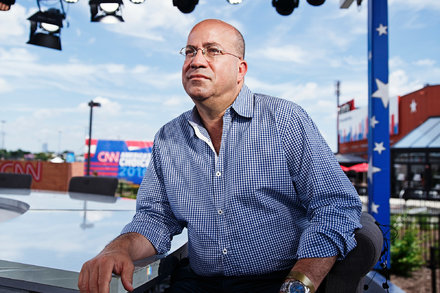 The Network Against the Leader of the Free World

President Trump, in a series of denunciations of CNN and a video depicting him wrestling it, is “trying to bully us,” said its president, Jeffrey Zucker.

CNN still has SOME integrity deep down

Make that ‘commercial interests’ instead of integrity.

That just sounds wrong to my evil minded ears.

What we’re seeing is the standard “victim blaming” response.

First a reminder - The real story here isn’t that someone made a shitpost on /r/The_Donald, the real story is the the President of the USA published said shitpost in as part of an ongoing attack on a news organization.

I agree with all the things Popehat is saying, but he’s missing out on the fact that the alt-right (mostly) knows that we’ll take the bait and end up focusing on CNN as the bad guy in all of this - redirecting a good portion of the outrage. Its a trick and a tactic they use again and again. Making it out like they’re the victims, courageously struggling against the status quo, when the reality is closer to the opposite.

For the record, I thought /u/HanAssholeSolo’s apology was a welcome breath of fresh air. And CNN should have accepted it more graciously. Also for the record, /r/The_Donald admins apparently deleted the apology (at least originally) and it’s now (predictably) going bat shit over the whole thing. Current top post.

He finally got around to criticising a right-wing censor a few blog posts ago…and framed it by blaming the evil leftists of the SPLC for “tempting” them into it, of course.

His commentariat is roughly 50/50 glibertarian/fascist, and besides the occasional snark on twitter he’s made fuck-all response to Trump, just as he constantly ignores the silencing of African-American protest.

Not impressed, not surprised.

Someone would have to be a fool to post anything online under their real name these days.

The only hypothesis that I’ve been able to find that is even close to covering my bafflement is that it was read by a member of the legal team who is so hardened by making “current behavior does not imply a binding promise of future behavior” that he is literally incapable of detecting plain language “it would be a pity if you were to make us…reconsider…” threats that are so obvious as to often be played for laughs.

It’s a particularly glaring failure when CNN’s position is actually reasonably sympathetic, possibly even generous. “We did some relatively simple investigation; Mr. Shitlord isn’t nearly so anonymous as he thinks, and boy is his record a quality one, but we aren’t generally in the business of doxing private citizens, so FFS remember that figuring you out wasn’t that hard and be less of an asshole in the future…” is a reasonably polite stance, certainly more than the guy has a right to. But phrasing it as “STFU, or the docs come out.” rather ruins it.

The hilarity here is that CNN essentially doesn’t understand social media. They even threatened to “out” the wrong guy. The creator of this .gif lives in Mexico.

But sure, lets have a news organization threaten to out a source because it has things they don’t like. CNN totally missed the boat on this one.

stir shit up in order to get get more clicks

That’s always been what a lot of ‘journalism’ was a front for, even before the internet. Clicks, adverts, subscriptions, circulation. You think the Daily Mail writes those “SHOCK, HORROR, PROBE” stories because of its sense of civic duty?

Spending 6 hours reacting to something that took two minutes is obviously a terrible strategy(even if their response had been effective; it’s a great way to lose a war of attrition with someone who has ample tweeting time, and it wasn’t even effective.)

That said, if being displeased that the president is openly attacking media who won’t toe the line is ‘partisan’; we have a bit of a problem. The ‘4th estate’ isn’t exactly in great shape begin with; and one would hope that( if only for “the president might not be our guy next time” reasons, if nothing else) that people would see continued attacks by the executive branch on the media as a bad thing.

It’s not a policy with a history of ending well.

So what is the difference between a “news network” and a news paper? We want our news networks to avoid blatant propagandizing … does the same apply to newspapers? There is an argument going on in the UK about how the BBC (a news network), for example, can be impartial when it reports what is in the press (most of the UK press being highly partisan propaganda for the right). Your “objectivity” is someone else’s bias.

I gave up on CNN a number of years ago when they began trying to emulate FOX news’ success and filling their air time with talking heads. I don’t want people telling me what to think, hours of endless opinion and conjecture, I want the news so I can decide for myself. These days it’s only NPR and BBC for me, with the Washington Post as my paper of choice.

I’ve not had much time to delve into the news this week. Can anyone fill me in on whatever horrible substantive stuff Trump did in the last few days that he managed to get bumped off the front page with this week’s Twitter distraction?