Diablo 2 remastered for PC and consoles

A friend of mine a few months back never played it, so I dug out my old cd’s (can you believe it? They used to put DATA on shiny frisbees) and waded back into the depths of hellspawn. The graphics suck, there is user unfriendly controls, the UI informative menus are sparse and it’s an absolute blast to play. I fear I am all in on this project.

Titan Quest is my infinite return ARPG.
I’ll play this one though.

This is very bad news for me. I sank so much time into that game. I had a full set of lvl 96+ characters. I know they’re long gone, but that just means I have to start over. No. Nooooo.

ETA: Two games I’d love to see lovingly updated with better graphics and PC capability are Thief and Silent Hill. Thief did have a package set several years ago, but it wasn’t a real overhaul of the game.

I begrudgingly played to completion Diablo, Diablo II, Torchlight (which shamelessly ripped off Diablo and Warcraft 3’s graphic style) and Dungeon Siege II (which shamelessly ripped off Diablo and Warcraft 3 generally). Of the four i might be convinced to play the latter again, but not if anything else good was available. I definitely played them all compulsively, but my memory is of largely resenting the fact.

Looks great, I’ll have to consider buying it. Glad to hear they’re remastering it rather than redoing the whole thing, that series was really great the way it was.

Wait for the reviews after the remaster releases to the public.

Blizzard promised a LOT of improvements with the recent Warcraft III: Reforged, and failed to deliver. Keep your expectations low and maybe they won’t disappoint this time.

Hopefully it will keep the cow level.

Diablo II claimed hundreds of hours of my life. I’ll never get them back, but I had a great time losing them. Enjoy the oral history of one of the most enduring and popular action RPGs of all… 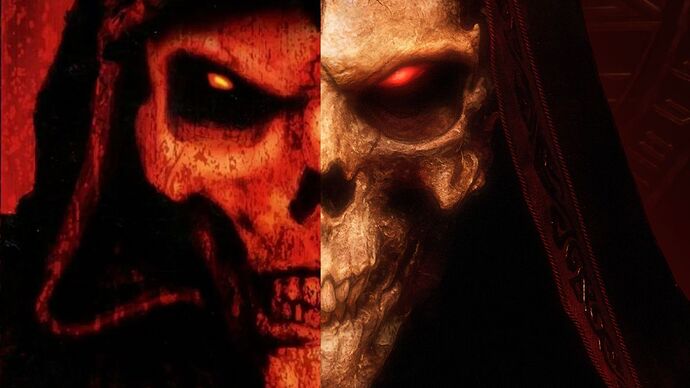 The devil's in the details.

As you said we’ll have to wait and see how it shakes out in the end, but they do have what happened with wc3 in mind.

Weird that they’re calling it a “remaster” when it’s really a remake. It’s true they’re keeping the game logic, but it’s going from a 2D sprite game to a 3D game, with all new models for the graphics, which are simply trying to “remain faithful” to D2. They’re making some weird choices to be “faithful” to the original, not really understanding why some things were done the way they were originally. (This is what happens when you don’t have any of the original developers, I guess.)

For example, a big deal is being made of how the Succubus and Assassin used the same base model, so they’re doing that again. Except in D2 that was just a time-saving technique (having a body model to use as a starting point), the final sprites look nothing alike after re-texturing and animation; in the “remaster” they look identical. (This seems less a problem of not having the original developers, but not having anyone who made games back when D2 was being developed, and understand the limitations that were being worked within.)

2 of the 3 creators of Torchlight were leads on the original Diablo and Diablo II team. I believe a bunch of other staff also came directly out of Blizzard North. Which basically collapsed around that time.

As far as Dungeon Siege. It’s been a while but I don’t recall it playing much like Diablo or much resembling Blizzard’s output.

And Diablo “shamelessly ripped off” Rogue/Rogue-likes. A damn near 20 year old genre by the time Diablo came out. This is not ripping things off, that’s just how ideas develop, proliferate and change over time.

Blizzard has done enough good work in the past that I won’t say this is going to suck right out of the gate, but yeah, the Warcraft III remake was a disaster and I was very glad I waited for the reviews and ended up never buying it. What’s worse, they never fixed it- it’s a garbage product that remains a stain on their record. Either they learned from that experience or it was the beginning of the end for them. Time will tell.

This is very bad news for me. I sank so much time into that game. I had a full set of lvl 96+ characters. I know they’re long gone, but that just means I have to start over. No. Nooooo.

I feel like “walking around” in Diablo was the modern reinvention of time suck. Not as bad as endless resource mining. I’ve been playing a bit of Path of Exile which is free on Steam and nearly identical to Diablo. But it’s also a time suck and I’m having a lot more fun flying fighter planes w/group chat (if only to point out the awesome punny pilot handles) in War Thunder.

2 of the 3 creators of Torchlight were leads on the original Diablo and Diablo II team.

More than that: a big chunk of Blizzard North, after Diablo 2, developed Hellgate…the engine of which, allegedly, was used not entirely with permission, to make Torchlight.

Beyond the basic gameplay (my memory is that Dungeon Siege kind of split the difference between Diablo and Neverwinter): gems, sockets, teired loots, etc. they both ripped off monsters and PC species shamelessly.

I can’t wait to find that magic item again, a Dirk called “The Diggler”

At least the first one reminded me more of Gauntlet, particularly the early 3d version that hit arcades and consoles around that time. With bits of Neverwinter.

they both ripped off monsters and PC species shamelessly.

Many of those were fairly stock monsters by that point, and Diablo did not have player “species”. To the extent that there was a lot of lifting, it wasn’t just Diablo. I recall the original game getting a really weak reception over lacking most of the features it promised, and being highly derivative. Particularly of Neverwinter. I was always sort of surprised it got a sequel. I also remember not liking the game at all. Though I think I still own it in some fashion.

As far as the item system goes, many of the features had appeared in earlier Rogue Likes and pen and paper games. Between Diablo and Diablo II there were lots of what were labeled (fairly or unfairly) “Diablo Clones”, several of them actually hit on features that would be core to Diablo IIs item system well before Diablo II came out. Particularly sockets and gems, I recall several CRPGs that had “runes” or spells or whatever that could be applied to weapons to juice them, Fallout had weapon mods not all that different. There were no set items in Diablo I, and the “tiers” were limited to regular and magic items, plus a handful of unique items acquired from quests and particular bosses or creatures. Basically ported over wholesale from Rogue, and not terribly different than what the then popular D&D based CRPGs had going on.

Point being this portion of Blizzard that doesn’t exist anymore, didn’t cook that up fully formed in a vacuum. They were building on and iterating on what was out there just as much as all these other folks.

More than that: a big chunk of Blizzard North, after Diablo 2, developed Hellgate…the engine of which, allegedly, was used not entirely with permission, to make Torchlight.

Hellgate developed by Flagship Studios, who later turned into Runic, who produced Torchlight. It’s the same people. The switch to Runic and Torchlight resulted from a rights dispute around their follow up to Hellgate after the company went broke. From what I recall the dispute over the engine is part and parcel of the same problem.

Not sure if this is good or bad news. I bought Diablo 2 just a few years ago off the shelf at Walmart, but it would never install and run correctly. I assume it was just obsoleted by Windows 10. There was absolutely NO help online, as everyone was on Diablo III.

Anyway, good to know that if I want MORE disappointment, I can pay for it again.

They apparently patched it for Windows 10 a ways back.

But generally for such thing info lives here if there isn’t a quick fix:

More than that: a big chunk of Blizzard North, after Diablo 2, developed Hellgate …the engine of which, allegedly, was used not entirely with permission, to make Torchlight.

Ah, not exactly. Some of the former Blizzard North folks formed Flagship studios, along with Travis Baldree, who was the designer/programmer of the Diablo-inspired “Fate” action RPGs. (The Blizz folks headed up the SF Bay Area studio, Baldree was in the Seattle team, which was quite small.) Baldree’s team, which included some other “Fate” devs, was working on the game “Mythos” which was very much a direct continuation of his Fate games. Mythos and Hellgate awkwardly shared a codebase (like, literally - there was a line in the code that, based on whether you were compiling Hellgate or Mythos, decided which half of the code to ignore). They didn’t share a whole lot though, besides the network code.

Baldree was the big mover on the Mythos side, credited with doing most of the core work himself. (People talked about him as if he were a kind of development genius, whipping out good game code at high speed.) When Flagship went under, Mythos was still unreleased, but Flagship’s publisher owned it and at the time still intended to put it out. So Max Schaefer from Blizz joined up with Baldree’s team to form Runic and make a similar RPG, “Torchlight.” I’m sure it was inevitable that there was some code re-used, as there probably was between Fate and Mythos, as Baldree was writing the code for these games, but it wasn’t the same engine (and it certainly wasn’t the same game) - this benefited the game; Torchlight was an improvement over Mythos. However, the mechanics of Torchlight are an evolution of Mythos’, just as Mythos’ were an evolution of Fate’s. (The respawn mechanics, the gems, pets and fishing and more all originated from Fate.)

Hellgate developed by Flagship Studios, who later turned into Runic

Flagship, like Blizzard was when they made Diablo before it, was very much two studios - the Hellgate team, which had former Diablo devs, and the (very small) Mythos team up North, which had former Fate devs. Runic was made up of the Mythos team, I think only adding Max Schaefer, one of the founders of Blizzard North and Flagship, as a producer. In terms of actual development, Torchlight wasn’t directly influenced by Diablo or its developers, at all, really.

Press releases and news stories always tout the “former Blizzard executives/developers” who are involved in any way, and always make it sound like they’re key designers of anything they’re involved with, even when that’s really not true. So the fact that the lineage for Torchlight is very much directly from “Fate,” via Mythos, rather than Diablo, gets missed. Which is a bit weird, given that Baldree was pretty transparently remaking the same game over and over again, with improvements.