Did the DART mission actually redirect an asteroid?

Originally published at: Did the DART mission actually redirect an asteroid? | Boing Boing

Dr. Smethurst is one of my favorites. If you haven’t checked out her book, The Universe at the Speed of Light, you really should. She’s on if those who knows her subject well enough to make it understandable to non-astrophysicists without making us feel like we are idiots. 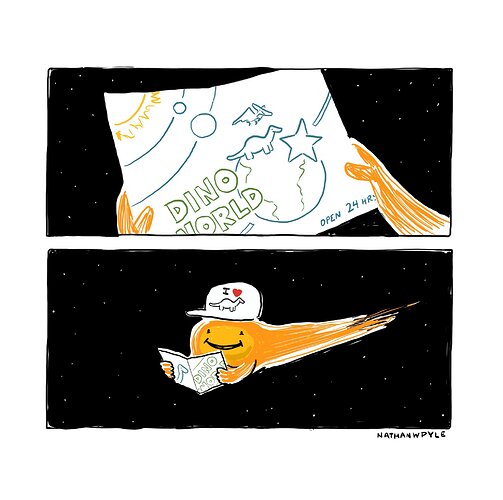 Did the DART mission actually redirect an asteroid?

Any headline that ends in a question mark can be answered by the word no. ‡

Fucking Physics! How cool is this?! Prof Moriarty would be proud of this experiment with the Dynamics of an Asteroid.

For those who want just a wee bit more “Oh, yeah!” from this news, the collision was even a bit elastic. That is, the impulse applied to the target was at least a bit more than the momentum of the impactor.

You can see that from the “splash” back along the impactor’s trajectory.

The more interesting question for me (and, I would have thought for anyone with high-school physics) is “how might it have not deflected the asteroid?”

I mean, it’s a collision between two objects of known momentum in a frictionless vacuum; that should be about the simplest calculation NASA ever had to do. It’s easy to see how an explosive charge or a glancing blow could be unpredictable, but once they knew the spacecraft had hit dead on, was there any serious doubt what the follow-up measurements would show?

It would depend on the makeup of the objects. Two solid objects like pool balls would impart momentum as expected. If the asteroid was a loose collection of gravel, it could splash and the momentum would go into distorting the shape more than moving the object. Imagine the object was talcum powder, or liquid water, or a solid steal ball, soft lead etc. The pictures showed a loose collection of rocks and gravel on the surface, but apparently it was more solid deeper down.

a loose collection of rocks and gravel on the surface, but apparently it was more solid deeper down

Awwwww , that’s the sweetest thing anyone’s ever said of an asteroid.

The more interesting question for me (and, I would have thought for anyone with high-school physics) is “how might it have not deflected the asteroid?”

I mean, it’s a collision between two objects of known momentum in a frictionless vacuum; that should be about the simplest calculation NASA ever had to do.

It is a ball of plasticine. The bullet goes in and stays there. All of the momentum is conserved. You should know the velocity of the combined body.

It’s a watermelon. The bullet goes clean through, and only loses a bit of its momentum.

It is a ball of glass. The bullet transfers its momentum to the surface, but does not penetrate much. The momentum continues as a shockwave to the other side. The shockwave reflects off the far side, and a scab of material flies off, taking some of the momentum and energy with it.

It is a bag of gravel. The bullet tumbles and loses all its momentum and energy. Bits of gravel fly off. But how much flies off? What fraction of the energy stays as kinetic energy, and what fraction becomes heat.

We knew from the pictures that the surface is a pile of rubble. The bag of gravel would seem to be the best simulation if it was like that all the way through. However, it is likely that the finder sand and dust will fall towards the centre, making it more solid in the middle. It is possible that the bits may grow together over millions of years, making the centre crunchy rather than loose. Some of the rocks on the surface are quite large - if the impactor glanced off one of those, the outcome might be very different.

Yarr, but since momentum is a vector (and conserved), the sum of all the debris + asteroid vectors would always include a known amount of extra momentum in the intended direction. So for the main mass to not be deflected, stuff would have to fly out the other side. Which, perhaps they thought was a possibility? I guess the probe could kind of snooker material out the back of the asteroid, or pass through like a bullet.

Another thing that could have happened: conversion to rotational momentum? It wouldn’t ever happen at 100%, but anytime you hit off dead center Some of the (edit:incorrect)-i-n-e-r-t-i-a–>momentum of your projectile will be converted into making the target spin, which would be useless for changing its future direction/orbit