Disney will pivot Epcot away from its "sponsored content" model

wish that Disney would invest in transportation infrastructure (read Monorail expansion), the WDW bus network is far and away the absolute worst experience.

WDW has been putting together a gondola system for quite a while now. They finally announced it officially this week.

They also announced a van service in Minnie Mouse livery priced at $20, to take you anywhere in the park that a $7 Uber could go.

“Enter EPCOT, the Experimental Prototype City of Tomorrow, which Walt wanted to place in his Florida property – a property that was incorporated as its own special economic zone, with control over zoning, planning, and other regulation, up to and including the power to site a private nuclear plant to keep the power flowing.”

Not really that surprising, in the context of a 1960ies frame of mind.

For what it’s worth, if you want to, you can also visit a theme park that has been built in a former “fast breeder” nuclear power plant (that never went operational): 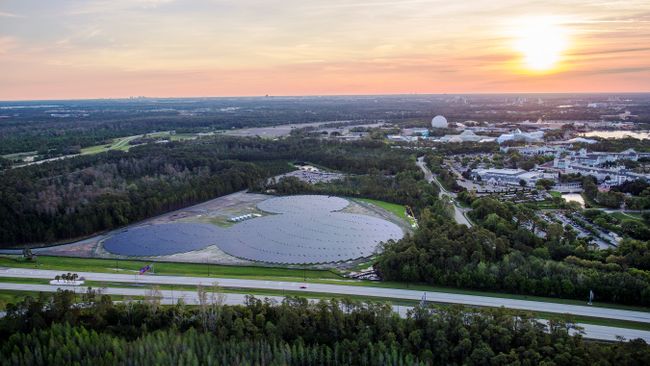 Once that nuke goes online, its energy will presumably start flowing back into the grid through this:

The Mickey Pylon is a 32 metres tall double-deadend pole-type pylon of a 230 kV-powerline in front of Osceola Substation, which is used for the power supply of Disney World in Celebration, Florida, USA and which was completed on February 15th, 1996. The Mickey Pylon, which is a Landmark Tower of Disney World shows a stylizied Mickey Mouse. It consists of a 21.3 metres high pole carrying a circular steel tube ring with 9.1 metres diameter and a weight of 13.608 tons, at which two smaller ellipt As...

I’m not an obsessive EPCOT fan (only been once), but I find the idea of EPCOT becoming more and more Disney-fied depressing. No, the Norway pavilion shouldn’t have a Frozen ride. Leave that to the Magic Kingdom. What makes EPCOT worthwhile is its educational value. Sure, update the exhibits, I agree Spaceship Earth is outdated, and the Ellen thing is embarrassingly pro-oil, but let’s not fill it with Disney Princesses or Marvel Superheroes.

Unfortunately, it’s only the nuclear reactor part that has a distinctly period flavor. The autocratic company town component is timeless.

EPCOT has, for some time, been my favourite Disney park. I have great memories of going there from childhood, but it’s adult-themed fun is what really does it for me.

The world showcase is probably my favourite place at any Disney property, especially during any of the festivals. But the rest of EPCOT feels and looks its age, and I’m sure a large part of that has been the sponsors causing stagnation.

I look forward to seeing what is to come!

This is a timely piece for me. This past weekend I visited by 12th different Disney park in the world, and that makes all of them. I was reflecting on the decades of change I’ve seen. I’m trying to figure out how much of it is simply change for improvements and keeping current, and how much of it is change for no good reason except “Star Wars is hot right now”. I’m still mulling over this but two themes are floating up, and the announcements this weekend and this thoughtful piece bring them out:

I don’t know. I saw all the exciting announcements this weekend and that’s great. But I’d like to seem them announce that they were going to pour some money into making you not realize that they had to spend so much attention on something, if that makes sense.

I was fascinated by the original plans for EPCOT, because I was fascinated by all things futuristic as a small child. I was unfamiliar with the level of micro-managing assholery that was also part of the plan. At some level, since Celebration is an actual planned residential community created by the Walt Disney corporation, it, not EPCOT(as built) is the true child of EPCOT(Walt’s dream) Without the futuristic transportation or completely enclosed city center, it does have a modern variation of the corporation as local government as envisioned by Walt in the form of a HOA. The architecture is completely unremarkable, the same as many other planned communities. Sadly, the idea of some private company telling you what color your drapes must be is also completely unremarkable these days. It’s like paying a mortgage to get the privilege of being a tenant.

Edited to add: I remember the model when it was part of the carousel of progress in Disneyland… https://sites.google.com/site/theoriginalepcot/

The overhaul of EPCOT is much-needed and much-delayed (due mostly to the delays and massive investment in Shanghai Disneyland). They haven’t revealed everything they’re going to be doing, but the map they showed at D23 and the announcements were interesting:
• A new space-themed restaurant next to Mission: Space
• A new ‘mission’ at that attraction as well as a new ‘Green Team’ mission (the one that doesn’t move) that’s unique, so people who ride it don’t feel like they’re getting a lesser experience
• A new movie in China that’s the first seamless, 360 CircleVision movie
• A new Ratatouille ride in France (the one at Disneyland Paris)
• A new Guardians of the Galaxy ride of some sort in the Energy pavilion – I have serious reservations about this and really hope it’s not just a thrill ride with zero education/science
• The removal of CommuniCore / Innoventions
• The removal of the Fountain of Nations

What wasn’t announced, but was expected to be –
• A new Brazil land added to World Showcase
• An overhauled Imagination pavilion; it desperately needs some love 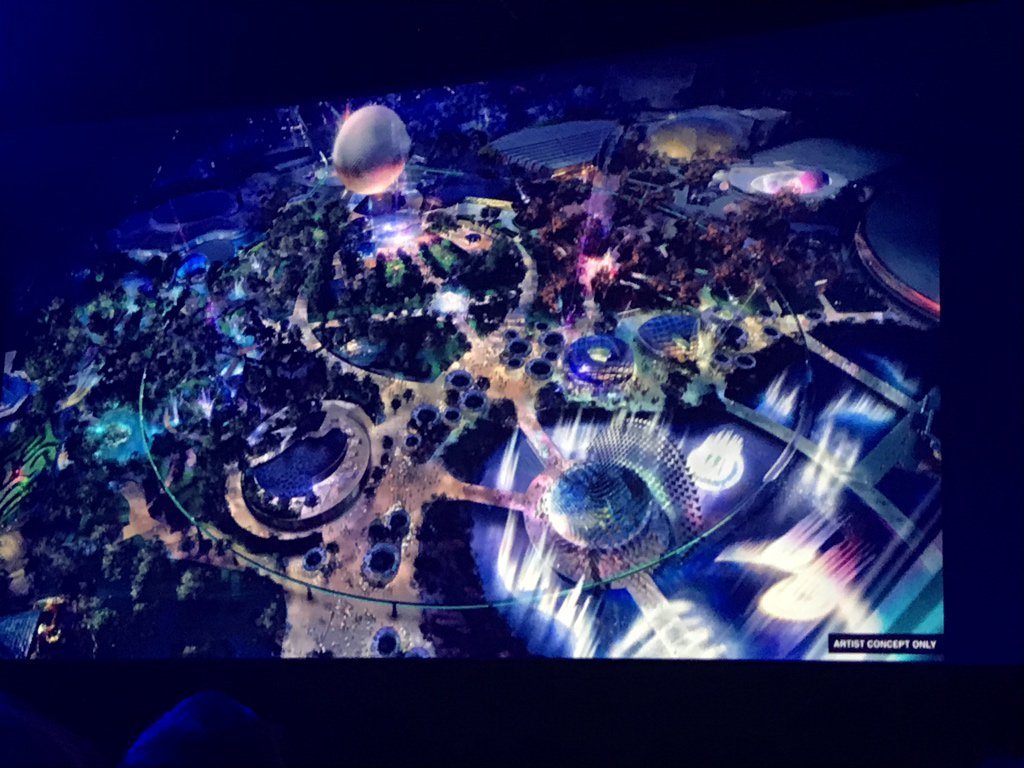 long, long walks (on punishing, unshaded walkways that bake in the Florida heat, even with the late-added misters that only increase the unbearable humidity)

This. As a kid I only went there in cool enough seasons to not care, but I was there last October just before Hurricane Matthew, and Epcot was by far the most brutal park in terms of heat and sun.

I actually like the world Showcase, if only because of the variety of food options compared to the other parks. It’s more useful if you’re in a position to go in the back entrance, though.

This. As a kid I only went there in cool enough seasons to not care, but I was there last October just before Hurricane Matthew, and Epcot was by far the most brutal park in terms of heat and sun.

It is indeed brutal. There’s a reason folks joke about EPCOT standing for Every Person Comes Out Tired. It’s a huge park with lots of concrete, shiny surfaces, and little shade. From the looks of the concept art shown at D23 this weekend, they’re adding tons of new landscaping to add lots of shady trees along walkways, finally.

It’s more useful if you’re in a position to go in the back entrance, though.

Absolutely – and I’m happy that the new gondolas they’re adding will drop guests off next to the back entrance to avoid that more-than-a-mile walk from the entrance.

I went to Epcot in the early 90’s and despised it. Maybe I could have tolerated it if I had known to expect the blatant levels of corporate sponsorship but that soured me completely when I realized what I had just paid too much money to see.

It probably didn’t help that I wasn’t old enough yet to really enjoy the World Pavilion but that fact didn’t stop me from having a blast at Busch Gardens.

Just came back from Disneyworld and Epcot was always a favorite of mine and my son’s. It’s got a LOT closed right now, so I hope they bring back some of the tech stuff that made this park different.

I first went to Epcot 30 or 35 years ago. It was very futuristic and had a lot of neat stuff. I remember fondly some room with lights that made sound as you touched them. The whole place was focused on forward thinking technology.

Next time I was there was maybe 10 years ago, and it had changed a lot. I don’t recall the world showcase as a kid, but my kids loved it. I enjoyed the tactile exhibits in the front…not what I remembered, but still still interesting. As we’ve gone several times since then, including just a few months ago, it seems they are removing that difference from the park, which is a shame. What’s wrong with having a “different” park? It’s still always full!

FWIW, I agree with the Frozen thing in Norway being annoying, but I can understand why they did it. They removed the gorgeous wooden boat that was there and now have turned a semi-forgotten area into a big hit. After all, Mexico has the Tres Caballeros ride, right?

I totally agree with you. Epcot was the only part of Disney that we really enjoyed (including my then 10 year old son). The Magic Kingdom is yet another bog-standard amusement ride theme park, albeit dressed up in fancy clothes. Epcot is truely unique.

Many years ago, I went to the Magic Kingdom with friends-of-friends who complained the entire time that all of the rides were “bog-standard” and were purchased from a “theme park factory” and just painted new colors.

I tried to explain to them that while a small handful of rides (Dumbo, Astro-Orbiters, etc) were pretty standard rides, the vast majority of Disney rides are bespoke original creations that everyone else has imitated and copied and ripped off. They didn’t believe me and insisted that the most creative theme park in the world is Cedar Point. I rolled my eyes at them, just as I roll my eyes at anyone else saying that the Magic Kingdom is just bunch of lame kiddie rides.