DJ Joey Negro, who is white, decides to change his stage name

I await a similar announcement from Young Black Teenagers, as the world says “Who?”

Game over for blackface and the like, as put out there by clued-in but boneheaded white entertainers who thought they were being ironic, respectful or clever.

Is Tim Westwood finally going to change his voice?

Good for him. Seems like good progress is being made across the board.

I’ve seen his name before in the record bins, and always just assumed it was his real name (it’s not uncommon as a legitimate Italian surname.)

Huh, I would have thought that would be Nero.

You can say that again!

Game over for blackface and the like, as put out there by clued-in but boneheaded white entertainers who thought they were being ironic, respectful or clever.

“I’m not black like Barry White, no I am white like Frank Black is.” - The Bloodhound Gang

who thought they were being ironic, respectful or clever.

Oh I’m sure there were a lot of fans that thought his stage name was clever or even respectful.

I’m totally fine with people changing their mind. I’m not going to judge someone harshly for a decision they made in their teens or twenties; if, and only if, they do their best to reverse the bad choices and acknowledge that it’s not appropriate.

P.S. I’m still pretty pissed that most of the songs I learned as a child in the 70s and 80s turned out to be minstrel songs. It’s problematic to bring them up at folk jam sessions even though everyone knows how to sing and play them. I wish I was taught some better music…

That name always bothered me, and not just because they were all white (c’mon, “young. . . teenagers?” stupid and redundant.) And yet it was Public Enemy that helped them start their careers. Whatever.

See, he could easily rebrand to “DJ Joey Negroni” and be fine.

There are also companies named after the owners’ surname.
https://www.negroagricola.com/
https://www.angelonegro.it/ (This translate as Black Angel and it’s a farm)
https://www.dalnegro.com/eng/

What about the infamous Fred Negro?? (seen here on vocals) 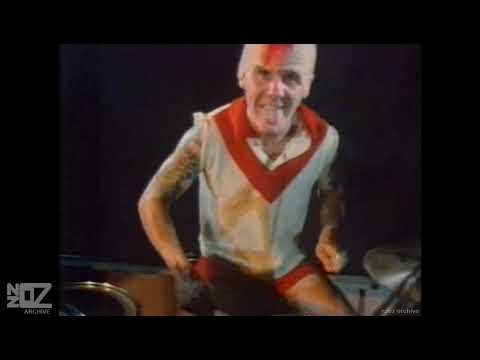 Well “negro” is Spanish for black - so in Europe and Central and South America they probably have lots of people, places, and things named “negro” that have connotations other than the American use. Just like we have people in the US with the last names “Black” and “White”. Or various other European sir names, like “Schwartz” und “weiss” (dunno how to do that double s thingy).

Had Joey been in Spain or Mexico, one could argue it’s just a color. One could even still argue that, I suppose. But being an English name, and professing familiarity with US black culture, he has to know the other meanings and connotations associated with it, and having a conscience, decided he no longer wanted to be associated with it.

"Game over for blackface and the like, as put out there by clued-in but boneheaded white entertainers who thought they were being ironic, respectful or clever. "

This one is a little more slippery:

The BB post is just a snippet of Dave Lee’s essay. I’ve added the full post from Dave below, which may allay (or embolden!) concerns borne of an assumption of malice.

I think it’s cool that he’s taking the reigns of his identity now, when it seems he let others drive that choice for awhile, but I don’t think maligning him for the choice jives with the name’s place in music/cultural history.

His music was wildly popular in the underground house scene in the 1990s. Far more than other scenes, house music was inclusive of people of all races, backgrounds, genders, orientations. His music helped foster that community of inclusivity. And while shifting personal identities were a part of that scene/culture - so far as I know - he wasn’t using the name to make people think he was black. Nobody every looked at the DJ back then, though, so unless you saw the flier with his pic on it, you might have never known!

Or, just listen to Must Be The Music . It’s a great anthem with a legendary vocal hook by Taka Boom.

I’ve understandably been asked the question of how did you come up with the alias Joey Negro many times. If you don’t know, here’s the story. Back in 1990 I’d produced my first solo release and I wasn’t sure if it was any good or what to do with it. I was running a label called Republic (owned by Rough Trade) at the time and had licensed material from the NYC label Nu Groove on several occasions. They were a super cool label, so I sent my song to Frank and Karen there and they said they liked it and had a gap in the schedule so would be prepared release it. Normally I’m ok at thinking of names but I just couldn’t come up with anything and the label said they really needed all the credits by the end of the week. I had a pile of records next to my desk at work, amongst them was Pal Joey “Reach Up To Mars” and J Walter Negro “Shoot The Pump”. I wrote down a few of the names off the vinyl and put them next to each other.

The one time I’d heard a J Walter Negro record on the radio as a new release the DJ announced it as “Negro”, the Spanish pronunciation, and that’s how I heard the name as I used it. Why didn’t I use Dave Lee? In retrospect I should have done, but to be completely honest it just seemed boring compared to the likes of Junior Vasquez, David Morales or Frankie Knuckles who were making some of my favourite records at the time. The Spanish house label Blanco Y Negro had a big record with Real Wild House and there was another song Piano Negro, I felt Joey Negro gave it a Latin American feel so it would fit in peoples record boxes. Many of the disco records I bought in the late 70s/early 80s were producers under pseudonyms, there didn’t seem anything odd about not using my birth name. Back then I never ever imagined the name as a longterm thing that I’d ever DJ under or be addressed as face to face. It was just for the label of a record.

The Nu Groove release did ok but I didn’t plan to re use the alter ego. However a year later I had finished a new EP and I was going to use the alias Raven Maize, but I played it to a friend and he said it sounded like the follow up to the Nu Groove release (and nothing like the earlier Raven Maize record) and I should use the name Joey Negro. I saw his point and took the advice on board. A few months later I remixed a track off that EP into a song called “Do What You Feel” and that became a big club hit that got into the bottom end of the pop charts. The name suddenly became well known to clubbers and record labels. I then began doing lots of remixes and even when I put Dave Lee on the mix name credits, the record label would change it to Joey Negro – and in fairness to them this was the name the general public was familiar with.

Over the subsequent years I’ve collaborated with loads of black artists, and of course the name has come up many times whilst working in the studio. I’ve explained the history of how it came to be and no one has ever said anything on the lines that they find it offensive or I should change it - in fact quite the opposite. Like a lot of DJs there are photos of me on social media, flyers and in interviews. I’m obviously not Black and it would be wrong if I was pretending to be. I don’t think I have sold more records because people thought I was black but fully accept there could be confusion.

In truth I’ve not felt comfortable with the name Joey Negro for a while, especially as I’ve got older. I’ve stopped using it a few times but establishing a new name as an artist isn’t easy and I’ve ended up going back to it. I understand now though that it’s not appropriate for me to carry on using the name. I’ve recently received emails, tweets etc saying that it is unacceptable and people find it out of place in 2020 - and I agree. From now on I’m dropping Joey Negro as a pseudonym, and all those future releases that weren’t already in production will carry the name Dave Lee.
I’m sorry to have caused any offence. My whole life has been about music but particularly black music, I love soul, funk, disco, jazz in a way that’s impossible for me to articulate in words and I have tried to champion it with the best intentions. Please be aware the changes are not instant everywhere, Best Dave Lee

Despite the broad brush painted by BB’s editors

Do tell, obvious devout fan of Mr Lee; what “brush” was that, then?