DNC alerts FBI to phishing attack on its voter database

What? I’m not sure where you guys are getting the idea that anyone is attempting to push this in the direction of armed conflict. Even the military leaders who are publicly commenting on this are talking about battening down security and answering it or interrupting it with sanctions and much milder in kind tactics. More over you might have noticed the Russians have invaded several other countries, and pulled off pieces of them as puppet states. And there’s that whole chemical and radiological attacks to assassinate critics in other Sovereign nations thing. While the DNC has literally no control over our military apparatus at the moment.

Significantly when they did. We’ve come to find out. Through released documents and accounts from the Obama administration during the election. That Obama and administration members in the know about what was happening. Decided not to give that information to the public. And to slow roll and minimize the response. Specifically to avoid the appearance of using it for political gain and escalating the situation. Against the advice of intelligence. And they’ve been heavily criticized for that. It helped lead to the leaks as the public portions of the hacks became big news. And let a lot of it roll out unimpeded.

You guys seem to be searching very hard for something to complain about, and you’re locked in on something that’s just not there.

Nice link! People should read it; it’s short yet informative. Personally I have no problem believing the White House would oppose mandatory auditability, but the article’s been updated to show there’s no evidence of that (yet).

The RNC has a pretty advanced draft of the poster for the forthcoming general election: 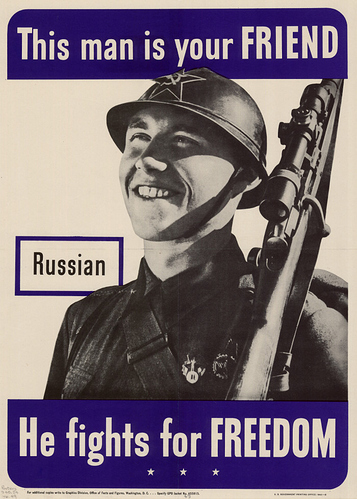 Naw, I’m actually kind of scoffing at the left wing complaints about Russia. We haven’t seen a reversal of opinion on censorship and xenophobia like this one since Jefferson Adams* signed the alien and sedition act!

Donald Trump’s not even close to being the worst President the US ever had; remember Bush minor? Harding? Buchanan, may he burn in hell? Pierce? It’s disheartening to see people formerly opposed to war mongering, censorship, and jingoistic nationalism take it up with such fervor simply because we have a lousy President.

* not as good an example as it’d’ve been had it been Jefferson, unfortunately. My area of historical expertise is much earlier!

Donald Trump’s not even close to being the worst President the US ever had; remember Bush minor?

The only reason George W. Bush managed to fuck things up worse than Trump was because the 9/11 attacks gave him pretense for the so-called War on Terror. On most other issues, such as immigration and taxes, he was no worse (and often better) than Trump.

If Trump had been President during 9/11 I suspect we’d be suffering even worse fallout today. Likely of the nuclear variety.

Xenophobia, nationalism, jingoism. You keep trying to imply an equivalence between this and things that are fundamentally driven by ethnic bias. And its just not. And you and others keep insisting on drawing connections to war mongering. Which again. Where? How? Its just not there. And to continue to imply that an nickle is a lynching isn’t a very good look.

We’ve got social pressure for private entities to push back on extremist groups and harassment. And social and political pressure for large companies to do something about something you yourself have pointed out is happening and a problem. Its a fair enough criticism to complain that some are overly focused on Russia to the exclusion of related issue. Overly focused on the hacking/cyber warfare elements to the point of obscuring the broader problems in our media, and the over all way this was conducted. Or of the way some are using it purely for political gain. But what you are describing doesn’t bear much resemblance to reality. And borrowing language from social justice issues doesn’t change that.

Xenophobia, nationalism, jingoism. You keep trying to imply an equivalence between this and things that are fundamentally driven by ethnic bias

No, I’m not. I’m talking specifically about the things listed. Either I’m failing to communicate or you are trying to put words in my mouth.