I just corrected someone today who used “colored people.”

I burnt a whole lot of bridges over the words “Brown Baby” being used in reference to my daughter.

Watched into #3 or so and that triggered another question for me: How many people remember the names of their childhood oder other friends you’ve lost contact with?

I just racked my mind of who was important to me between the 70s and 90s and I came with like 6 names easily. Names, that is. I remember a few people more and how I interacted with them in private, non-school or university setttings, but I can’t remmeber their names.

Now, my current friends and close acquaintances I can name, but for some of them it would be like having to remember the US states or all the German Länder – you generally know them and might get the list eventually, but unless you are there, you don’t remember. If they are standing besides me, surely. Well, almost surely. If I’d get asked on the street, I’d probably blank our. Though asked wether I had any black/gay/trans friends, I’d honestly said “no”, though, so I’m sure that many just said “yes” because they think that this is the socially acceptable answer.

The one trans woman I know I know mainly under her then Hacker-handler, but since it was a male character, I’d think using that one would be dead-naming her. I don’t remember her birth name, but not her real name. Lost contact after she married pre-transition and only ran into her when she was back into this region after moving, because she visited her daughter. Was glad to hear that even 199x her team lead was adamant to remind his team that he would consider any dead-naming and “just joking” termination-worth harassment.

How many people remember the names of their childhood oder other friends you’ve lost contact with?

Ursula. (Best friend when I was five years old.)

I could do last names too, but I think my point stands.

That’s impressive. Mine are:

• Michael , neighbour when we had moved

All white “of course”, as this was in the 70s and 80s and part of that in rural Northern Germany. I think the first POC I actually interacted with was this Afro-American/German girl in grade 11 to 13, who ruffled my hair which I found rather encroaching. Parallel class, no shared courses, though.

If someone actually wanted to make people improve themselves, they’d ask them if they have any friends who are black out of the spotlight, in a safe and nonconfrontational way, remind them that ‘no’ is an acceptable answer, and then ask them to reflect on what personal and structural factors might make the answer ‘no’. It’d be a nice way to open up a discussion about segregation, drawing their attention to the way that their friends are drawn from their workplace and neighborhood and just how little diversity there is in either. As well as their own biases.

Antiracist™ Brand Entertainment that embarrasses people on national television for the amusement of others is perhaps the best way to make people defensive, cause them to think about themselves and how to save face, and stoke the feeling that it’s all about some vague ‘them’ trying to do a vague something to them.

If someone actually wanted to make people improve themselves,

Nobody forced those folks to be on national television. They made that choice, and revealed something about themselves in the process. Just like nobody forces people to comment in online forums.

Also, you’re kinda missing the point; which is NOT one’s ability to recall the names of one’s childhood friends. In fact, time frame never even came into the discussion, until you brought it up.

The actual point is that if such people truly had a diverse pool of friends, they’d be able to name at least a few who don’t look like anything them.

Embarrassing others isn’t the point here. It’s instead that “good” white liberals aren’t as good in this sense as they’d like others to think, and as they themselves like to think. It’s also that supposedly having black friends is a common white liberal badge of self-display and self-approval.

The bit makes those points well, and whether anyone gets “defensive” or not is also beside the point.

What did he say? I stopped listening at Antiracist™

they’d ask them if they have any friends who are black out of the spotlight, in a safe and nonconfrontational way

Sure, cause covering over racism and keeping the reality that Black Americans face on a daily basis because white people have an utter fucking melt down over the slightest discomfort has always been the most effective way to make change… why I remember when Dr. King, SCLC, and SNCC quietly took aside southern Democrats and politely asked them for their civil and human rights, because segregation sucked, and those white democrats who ran the party all immediately complied! Gosh, it was all so nice and polite, and not a single Black person has faced one single ounce of discrimination since! I mean, I sure as shit didn’t grow up in my small N. GA town with signs of segregation well into the 1990s… There most certainly wasn’t Black and white parts of town, and only a token amount of integration at my public school. And I did not see the KKK actively recruiting into the 1990s, either! /s

I don’t recall the civil rights movement being driven by contempt-driven clickbait either.

While I’m fairly certain that when people have looked into what actually makes people re-evaluate their thoughts and change their minds in discussions about racism is having a less confrontational conversation about them where they’re given a calm opportunity to think and empathize with people.

Here’s to being given a calm opportunity to think and empathize with their oppressors. 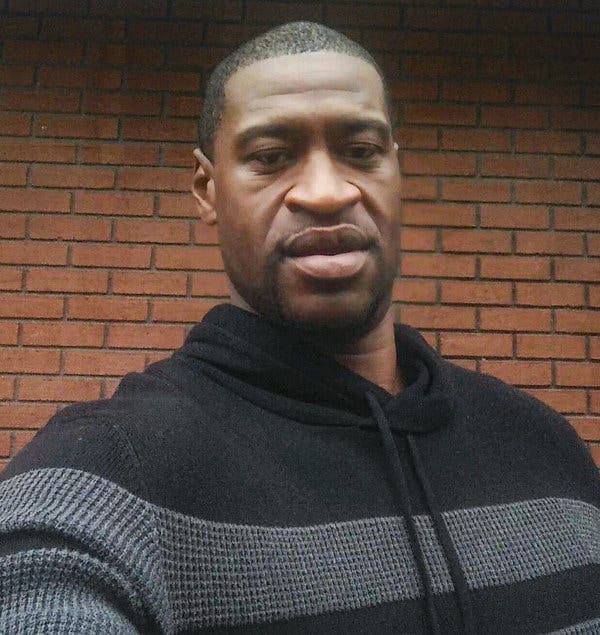 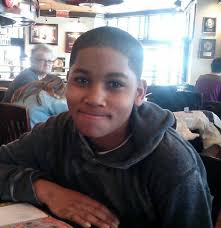 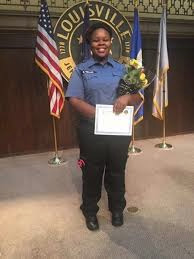 If someone actually wanted to make people improve themselves

That’s not even possible.

*change for the better = self improvement.

Sure, cause covering over racism and keeping the reality that Black Americans face on a daily basis hidden because white people have an utter fucking melt down over the slightest discomfort has always been the most effective way to make change… 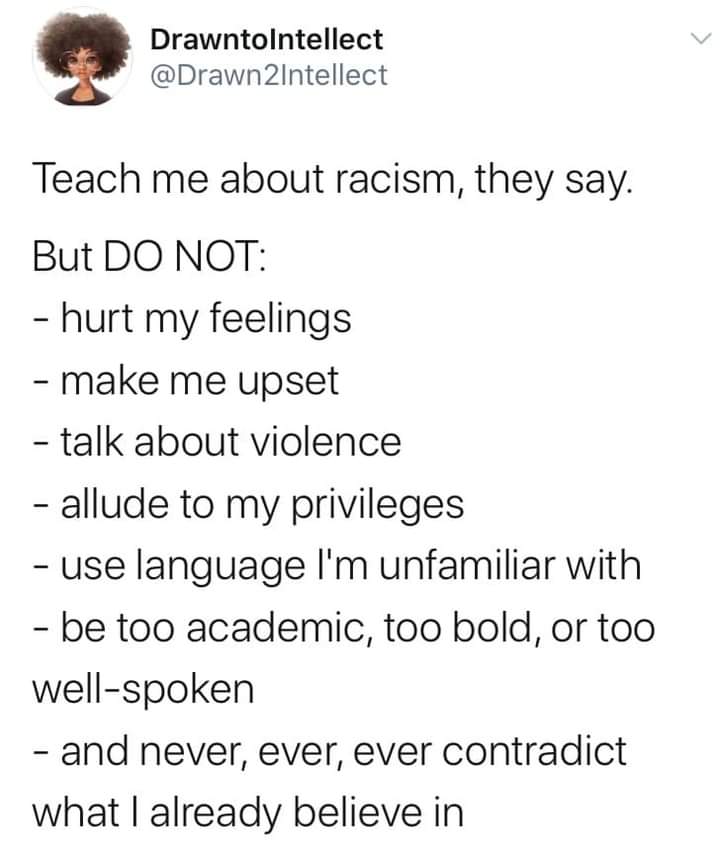 I’m, frankly, sick of tip-toeing around the fragile fucking feelings of white people when lightly fucking mocked for have pretentions to being more “woke” then they are. If I do or say something that offends someone who has lived as an oppressed minority, I hope that they tell me when I’m not holding up my end of the bargain of treating others with basic dignity, but instead, treating them like props to signal my virtue. I welcome being told when I can do better, so that I can actually do better…

It’s not rocket surgery or some deep fucking philosophical conundrum.