Originally published at: Do you have a Black friend? Watch how white people say yes, but then can't remember the "friend's" name | Boing Boing

. . . and suddenly these white folks were hit with a comical wave of amnesia.

at the risk of sounding stereotypically white, i’ve got 25 african-american facebook friends, and i can name them all, additionally i’ve got at least 12 others who aren’t on facebook and i can name all of them, and this doesn’t count my daughter-in-law, her mother and sisters, nor does it count my two biracial grandsons. of course, i may not be typical. it’s a shame that i’m not.

To be fair, while I have several black friends, it might take me a moment to think of their names if put on the spot. I don’t think of them as my “black friends,” they’re just my friends, so it’s not like they’re categorized in to a readily accessible bucket in my mind. Of course, some of these people could definitely be lying, I’m just saying it’s a little unfair to jump to conclusions

Interviewer: “Do you have any black friends?”
Me: “No. I don’t have any friends.”

I think I may hesitate a bit before listing off the names of my friends of color on national television to prove I’m not racist. That would be pretty gross.

Agreed, although that’s probably not the cause for hesitation for most of the people in the video.

Generally I would just decline to be interviewed in the first place but if I was put in the spot and had the presence of mind to give a coherent answer* I would probably say something to the effect that I’d rather not call out my friends publicly.

Joke’s on you, I don’t have any black friends. But I also forget the names of people I work with since at least ten years, unless I share an office with them. Some of them are just “the woman with hair” or “the guy in statistics”.

Especially if one happens to be a POC… or a woman. Or LGBTQ+. Or disabled. Or…

this would be me…umm…no…but not because i am racist…i just a 46 year old married person living through a pandemic. i have NO friends. my kids have black friends. so…there is that.

I would probably say yes and when asked their names would start to question if any of the black people I know would really consider me a friend and whether I really consider them a friend or if they’re just an acquaintance etc? Like, I absolutely do not have any close black friends. But there are plenty of people of all races that if talking about them I would say “a friend of mine…” but if pressed on that I might downgrade to “a person I know”

The better question might be whether any of the Black folks that you know consider you their friend.

The answer might not be the one you expect.

Exactly my response. When growing up, my old neighborhood in Oakland represented the whole spectrum, none of which I ever considered any race - they were just my friends. It’s only in hindsight that I look back and can see how diverse we were.
It wasn’t until I entered the military that I was really exposed to blatant and open racism. I had always experienced some directed at me on occasion (Asian), but I had never seen it directed at others with such bitterness - it was eye opening.

Not unlike those who point to their (supposed) black friend as (supposed) proof of that.

Funny how that works.

I sense that this topic is only going to end up vexing me.

That so many people of privilege consider themselves ‘color blind’ is such self placating BS - if asked to describe their so called friends physically, they would not be ‘unable’ to do so. 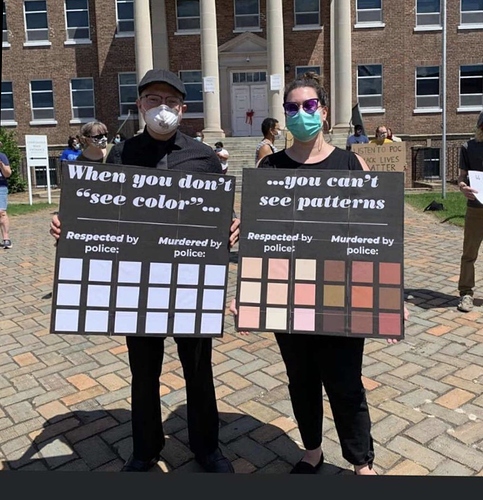 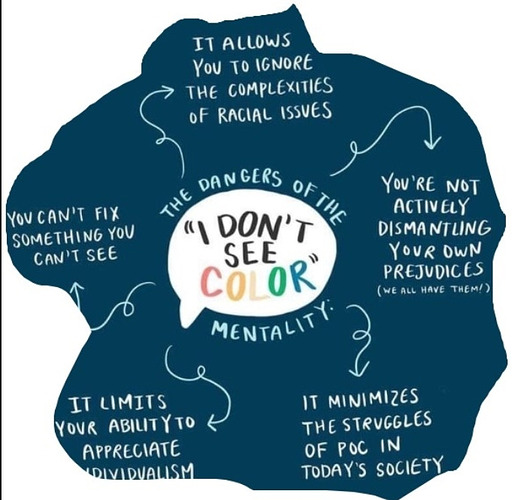 What if I don’t have any friends? Am I non-racist then?

Nope. Being antisocial isn’t the same thing as being antiracist.

It’s not about YOU

Identifying somebody by first name is not really “calling them out” unless they have a particularly unique first name.

It’s not about YOU

Don’t be silly; EVERYTHING is about them, always.