In their own minds, exactly.

I mean, I know being white tends to inspire narcissism, but sometimes (like in this thread), that’s so fucking obvious.

That so many people of privilege consider themselves ‘color blind’ is such self placating BS - if asked to describe their so called friends physically,

As someone who is actually colorblind, I can say that skin tone can be kinda confusing sometimes. People are light, dark, and kinda beigey-orange. Sure, other features might provide clues, so most of the time I can guess how people would self-identify, but there’s a lot of ambiguity. I try not to assume.

We have friends/neighbors that are Black, thankfully we remember their names, at our age you start to forget your own name.

That generally has more to do with physically not being able to differentiate between certain colors of the visible spectrum, not being unable to tell if someone is a ‘minority,’ or if they are being treated differently simply because they are not White.

Race is a social construct of power and exclusion, and none of us are immune to it.

You know what category of folks I don’t have any friends in: Christian Fascists.

I also forget the names of people I work with since at least ten years, unless I share an office with them. Some of them are just “the woman with hair”

That reminds me of the description of two mysterious unnamed antagonists in A Series of Unfortunate Events: “The man with a beard but no hair and the woman with hair but no beard.” 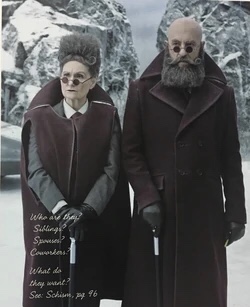 i don’t have any friends in this category but; unfortunately, living where i do in texas i have several acquaintances in that category; and, even more unfortunately, i have more than one first cousin, as well as several second cousins, who fall into that category.

By virtue of being biracial, I’m directly biologically related to several bigots.

I have no idea if they are fascists too, because I just don’t ever fuck with them, at all.

of course, i may not be typical. it’s a shame that i’m not.

Isn’t it? It’s asking a white person (not always a dude in the video) if they have black friends, and then watching them waffle about it.

I probably don’t know any black people who consider me their friend. So I guess that answers the question.

The point is that many people have this unrealistic ‘ideal’ vision of themselves that they don’t actually embody.

If someone is not actively working to advance racial equality and equity, if they’re not owning their own ingrained biases, then they are simply complicit.

It’s not about you, it’s about your whiteness. It’s about what white supremacy does to white people. Even those who think they’re good ones.

No. And I’d argue that not having any Black friends doesn’t make me racist. I’m not on Facebook, and I can count the number of IRL people (so, not counting online communities) I know who I consider friends without using up all my fingers. I live in a super-white state and I’m just not that social.
If asked, fibbing about having Black friends makes me kind of racist, though, or at least indicates I’m not anti-racist.

Of course, not trying to downplay the issues BIPOC face, just saying it’s something to consider

Race is a social construct of power and exclusion, and none of us are immune to it.

Which is exactly why if you were to point at some person and say, what race is that person, I don’t always feel confident that the answer I might give would be the same as what that person might say about themselves.

What does that have to do with white liberals and their (often imaginary) black friend?

Again, this topic isn’t about any one individual. Methinks you might be missing the larger issue at hand.

What does that have to do with white liberals and their (often imaginary) black friend?

And sadly, it’s not just ‘woke’ leftists who do this…

just saying it’s something to consider

I’ll make sure to give it all the consideration it deserves.

And sadly, it’s not just ‘woke’ leftists who do this…

I believe that “My Black Friend” lives in the same village as the “Lots of People Are Saying” folks.

I agree that the point of this exercise isn’t really to prove to anyone whether I’m racist or not by marketing my social connections like some kind of achievement trophy or pretending I don’t know what black means. Friendship is this close personal dance of vulnerability and boundaries after all.

It’s better to just be honest. A lot of white people never really make an effort to get close or be vulnerable to any black people even if they see them regularly irl. Enriching social connections does take determination.