Does anybody here use Nextdoor.com?

Nextdoor is the free private social network for your neighborhood community.

Over 166,000 communities across the U.S. are using Nextdoor to strengthen their neighborhoods.

I got an invite in the mail from a neighbor, but I do not recognize her name, so I’m not sure how she knew we are neighbors and where she got my address from; i.e. it seems more like Nextdoor got my name from a mass-mailing list and then doctored the invite with someone’s name.

Anyway, I like the idea and have sort-of wanted something like this, but I hate the larger social networks. Nextdoor seems like it avoids a lot of the annoying SN aspects, and all the research I’ve done online seems positive. But if they’re gonna vaccuum up my personal data and sell it, or track me, or do any sundry creepy stuff, that’s obviously out.

Anyone have any perspectives? either as a user, or I know a lot of y’all are connected to the tech industry and may know about it that way?

Curtain twitching nutjobs, in my experience.

ETA: that’s not entirely fair, it’s okay for getting rid of / getting free stuff from neighbours etc, but there’s definitely an unpleasant (racist, anti-homeless etc) feel to some of the conversations about “suspicious” people in the area.

But maybe I just live near a load of arseholes?

yeah, I saw some criticism of it about that. I wonder how much of that is a reflection on the specific neighborhood? But there may always be that element to any human community, unfortunately, be it online, IRL, workplace, neighborhood, or whatever.

My neighborhood is predominately Hispanic and all I’ve seen are the people complaining about that.

Maybe I should join to raise the level of discourse because the taquerias around me are OFF THE HOOK!

Oh, and it occurred to me to check the masthead on our neighborhood newsletter. My invite was sent by the secretary of the neighborhood association, which I have absolutely no contact with and the newsletter gets sent to “(Neighborhood name) Neighbor Or Current Resident” but the invite was in my name. Kinda creepy. But also I feel weirdly happy to be included, since my neighborhood is mostly rich folks and then people like me who rent the cheap post-ww2 apartment buildings. They could just write us all off as scumbags. But these are a lot of ex-hippie boomer rich folks, so… I dunno. I don’t fit in with them, but I feel like I do contribute some as a neighbor.

In my opinion, having met some of the team, I think Nextdoor is doing things the right way. The require real names and real addresses, which encourages real community building and discourages bad behavior (tho obviously what some consider bad is not bad tonothers). There is a more neighborly feel to the site, and depending on the community it can be can be pretty active and valuable. And the team seems genuinely committed to positively supporting community. On the downside I find the whole system to be less well designed for any given purpose than other services, but overall it’s pretty functional.

There is, as far as I can tell, no revenue model, and that leads me to be worried about the sale of personal data for advertising or other purposes, since obviously the data that they’re cultivating is the highest value “hyper local” stuff they can get. I haven’t checked their policies, but you probably should before signing up.

it’s okay for getting rid of / getting free stuff from neighbours etc, but there’s definitely an unpleasant (racist, anti-homeless etc) feel to some of the conversations about “suspicious” people in the area.

That’s pretty much my take on it from what I heard from the wife who has an account.
I got an invite via a neighborhood group from meetup.com but so far have ignored it.

yes, some of the reports I’ve read focused on waiting for the other shoe to drop, how monetization will be handled.

I’m on NextDoor in Somerville, MA. I don’t contribute much to it, but I think it’s pretty good as a locally-base Facebook replacement.

People use real names, and real addresses (as far as I know). That probably limits the amount of negative or highly-polarizing discussion, though that could also be a symptom of the area.

Most of the discussion is about:

There’s not a lot of politics, although the election and the aftermath bring it up a little – e.g. an announcement is made that there will be a town hall about sanctuary cities, and so some people will use that as an opportunity to rail on immigrants, and get quickly shot down by everyone else. But you can mute threads/people you are not interested in.

I live in a very deep-blue liberal bubble, though, so I could see the discussion being quite different elsewhere. I seem to remember a post here on BB about the creators trying to do positive steps towards reducing that kind of behavior, though.

because the taquerias around me are OFF THE HOOK!

I signed up with my Spam ID name…so…so much for real names…and a close approximation of my address.

A lot of pearl clutchers, but there was a pretty sketchy individual going around recently (Windows\ Roof estimates, No clipboard or literature, Reflective Vest said UNITED on the back) and I believe the list was helpful in pointing him out (someone uploaded Pictures from home surveillance)

Helpful for getting rid of crap.

Benign but treat with caution.

This feels a bit invasive to me. My wife originally signed up. I don’t think I’m pulling the trigger.

I understand why this seems sketchy but its one of the things that stops Nextdoor from being flooded by nonresidents or being dragged down by phony data. I was reluctant as well, but once I did it I appreciated the reasoning behind it.

I signed up for two minutes, and then cancelled. I was lured by the come-on that people in my area were talking about supposed break-ins on my street, but it only told me about them after I provided my address, and when I investigated the sparse message base, it had no such conversations. I think it’s a scam. You should definitely stay away.

People are not happy. 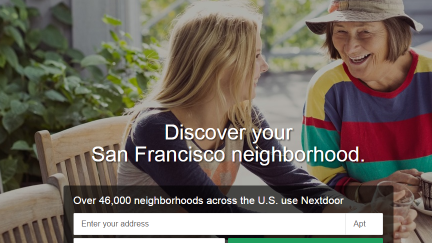 711 reviews for Nextdoor, 1.5 stars: 'Day one, my experience is these people are rich elderly crackers that aren't happy just living in a nice neighborhood, they need to control something or someone and cry the whole time they are rooting their nose...

all those negative reviews are by people who used a UK network called Streetlife that Nextdoor bought and took over. So that’s understandable–the privacy settings were completely different.

ND lets you hide your street number, but these reviewers are saying that if you do that, your exact home location can still be seen on a google map. If so, this is contradictory to ND’s stated policy that they shield from google/search engine results

Join the free private social network for your neighborhood.

Over 150,000 communities across the U.S. are using Nextdoor to strengthen their neighborhoods.

Personal information shared on Nextdoor will never show up in Google or other search engines.

It works well. I did learn quickly that I live near some screechy entitled people that will complain about the strangest things. But with that said, I am now more aware of things going on in my neighborhood (that don’t get picked up by other media) than I was before. Found pets, descriptions of car prowlers and home burglars, local stuff for sale.

After an incident a few years ago, I only have one colleague who has my actual cell phone number. Random people in my “neighborhood” getting my exact street address isn’t a recipe for privacy.

I use it. No complaints so far.

Our neighborhood uses it and we were invited a couple of times, but we’ve never joined.

I do know that our local police dept has had an issue with it when a nearby neighborhood had a rash of burglaries. Apparently, the boyfriend of a neighbor was committing the burglaries and kept tabs on all police communications with a member who was keeping everyone updated.