Does Kissinger-opening-China pose a problem for Clinton with working voters?

Are pundits right to portray Sanders as a less moderate Clinton with policy ideas cut from the same cloth?

… [W]ill voters realize she could be the next Henry Kissinger, and thus turn to Bernie Sanders’s idealism instead?

“I am proud to say that Henry Kissinger is not my friend,” Sanders said on Thursday night.

When Clinton clung to her Kissinger connection during the debate, Sanders reminded her of the Cambodian genocide and good jobs lost to China.

Maybe the Kissinger conflict between the candidates mostly meant nothing.

No one has talked much that way about “opening China” since criticizing Reaganomics became presumptive grounds for AM radio public shaming.

Clinton looked like a deer caught in headlights shining through a time portal from 1973. 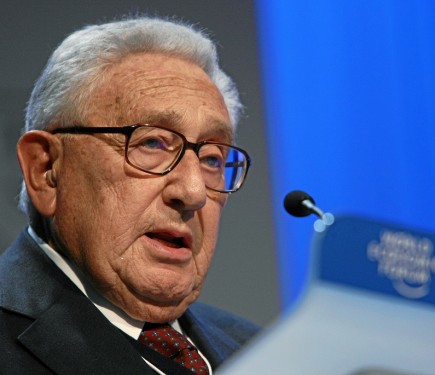 Henry Kissinger's relations with Iran have a long history. Though he can not entirely be blamed for the current situation in the Middle East, he is far more responsible for it than everybody believ...

His focus was oil not people, and his legacy is broken promises.

It was Kissinger who allowed Iran to buy weapons from the U.S. And by his last year in office this Eastern country became the largest American weapon buyer. After he had left his position, the Iranian Revolution of 1979 broke the established relations between the two countries—some politicians strongly believed that the former Secretary was to blame. His Eastern policy mainly concerned the oil market and, he even wondered once, whether they can overthrow some sheikhs to flex the muscles and just grab the oil

Some voters see that Sanders will deliver for working voters.

And the culturally fizzy wedge issues like affirmative action and drug crimes that the GOP used for 30 years to split working voters may finally have gone flat.

We had a thread on the influence of Henry Kissinger last year: I’ll dig it out rather than copy/pasting my replies from last time.

"Kissinger said we don't have friends/American only has interests..." (with all apologies to Tom Waits) wrath

This was an interesting thought piece on Henry Kissinger and his role in shaping the modern middle east. So how critical is one man in shaping the world today? Is it glossing over the complexity of agency of the leaders and citizens of countries in the middle east/part of SE Asia? Or does it reflect the geo-political reality of America as the dominant force in the world since the end of the second world war? More importantly, was there alternatives to what we lived during the Cold War an…

Oh, and of course, we can’t have a thread like this without this:

Why do you think Clinton was surprised during the last debate when Sanders linked jobs lost to trade deals to Kissinger’s work in China?

I think she realized on stage that her Kissinger connection also connected her to poor economic outcomes for working families.

So if any pundits are suddenly claiming Hillary Clinton is the same as Sanders, in any way, you can be sure they are just repeating her current talking points.

An old Clinton adviser talks some more about these practices

In the '90s the Clintons were the moderate version of Newt Gingrich.

I think this is an accurate description of Third Way (corpratist) dem strategy.

H. Clinton is to Nixon as Eisenhower is to FDR.

And as the Reagan coalition continues fracturing over the new tolerance for formerly reliable scapegoats, there’s new opportunity to mobilize working voters.

H. Clinton is all Third Way corporate and does not seem to know how to mobilize working voters.

In the 80s and 90s, working voters were too tough for dems to mobilize because of GOP wedge issue dogwhistling to southern dems.

I don’t think the Clintons are any more committed to a Third Way than they are to anything else. The Third Way was convenient for them in 1996. This week Hillary is a moderate socialist. Next week, whatever. It didn’t occur to her that anybody would look up Henry Kissinger’s actual biography and use it against her. She was just dropping a name.

God knows what kind of moderately fascistic positions the Clintons will stake out if they end up triangulating against Donald Trump in the general election.

This week Hillary is a moderate socialist. Next week, whatever. It didn’t occur to her that anybody would look up Henry Kissinger’s actual biography and use it against her.

Trying to rebrand a corporatist as a democratic socialist won’t work because they operate differently. That’s partly why Bernie has crowds, and Clinton doesn’t.

And Sanders didn’t have to look anything up about Henry Kissinger. He never forgot.

Whatever Clinton says during the primary, her actual electoral and governing position will be wherever she determines that one voter to the left of the Republican candidate is. So, if you want a mildly more sane version of Cruz or Trump, vote Hillary.

This topic was automatically closed after 370 days. New replies are no longer allowed.