Dog on a treadmill

True enough, but my point was that “nothing need ever be truly lost.”

Ever since I first got internet access, it’s been my personal habit to constantly look up anything and pretty much everything that even vaguely piques my interest… particularly when I hear others discussing something I’ve never heard of; be it new or old school, trivial or life-changing.

But then again, I’m naturally inquisitive, as well as an ‘old soul;’ and to me, instant access to practically unlimited info was nothing short of miraculous.

I genuinely pity the generations that come after me, who take such a vastly powerful resource for granted; they likely won’t truly appreciate what we have until it’s gone.

I get quite a bit of old references, my era is late 80’s to 90’s and i have a good working knowledge of stuff from previous decades.

Same here; due in no small part to the existence of the web.

Same here; due in no small part to the existence of the web.

For me it was more due to binge watching tv shows and movies when growing up. Though i am an avid learner and make it a habit to research random things on a whim as you also mentioned.

These days though? I don’t watch TV so don’t ask me anything about current shows because i will likely have no clue.

For me it was more due to binge watching tv shows and movies when growing up.

Now that you mention it; a lot of my input did come from syndicated tv, when I was a kid.

These days though? I don’t watch TV

Same here, and what I do watch I stream via the net.

I’m really lousy these days at working up the will to watch shows online. For example i really want to watch Atlanta, but find reasons to get distracted.

Back on topic…I wonder if she’s still running?

…they likely won’t truly appreciate what we have until it’s gone.

Don’t it always seem to go that way?

Don’t it always seem to go that way?

TURNSPIT DOGS!!! Bred to run in a wheel connected to a spit and thereby spin-roast meat. 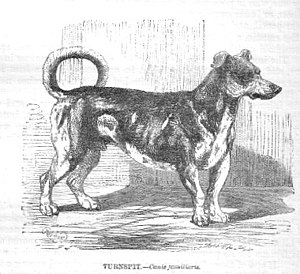 The Turnspit dog was a short-legged, long-bodied dog bred to run on a wheel, called a turnspit or dog wheel, to turn meat. The type is now extinct. It is mentioned in Of English Dogs in 1576 under the name "Turnespete". William Bingley's Memoirs of British Quadrupeds (1809) also talks of a dog employed to help chefs and cooks. It is also known as the Kitchen Dog, the Cooking Dog, the Underdog and the Vernepator. In Linnaeus's 18th century classification of dogs it is listed as Canis vertigus.

I watched a lot of TV and read a lot of books growing up. I’m a curious type too, I love being able to search up that thing that just popped up that I can’t place or name immediately. I still think first, but having a portable Library of Alexandria in my pocket is still frankly amazing.
Full disclosure: I didn’t get the Jetson’s reference

I was in my late twenties just a few years ago, and I definitely would have gotten it. The Jetsons were still in syndication when I was in elementary school. It definitely makes me sad when my own peers don’t know these kinds of references.