Donald Trump must be guilty – he just took the Fifth Amendment

Originally published at: Donald Trump must be guilty – he just took the Fifth Amendment | Boing Boing

This may be the closest Trump has ever come to admitting he was wrong about something:

“I once asked, ‘If you’re innocent, why are you taking the Fifth Amendment?’ Now I know the answer to that question,”

The joke’s on him, though. This is a civil case.

I’m relishing the hypocrisy even if his mouth-breathing followers will studiously ignore it, as they always do.

How can you have a low property valuation for taxes, and a high evaluation for a loan. Why aren’t they just using the counties valuation? Seems you have to have some collusion on the part of the tax agency and the banks.

Isn’t testimony in a civil case fair game during any later criminal trials, though?

Its a Civil action. Which means the Court can take negative inferences from taking the 5th.

Not necessarily. Burdens of proof and standards of admissibility are different. It usually works the other way around. Evidence at a criminal trial can always be used in a related civil matter.

We need a new word with fewer syllables to express the same meaning as “hypocrisy”. Your average (or below average) Republican can’t understand the concept behind a word that is so difficult to say or spell. “Double standard” is the best I can think of, and it’s still too difficult to parse.

That’s an insult to connoli.

Its a Civil action. Which means the Court can take negative inferences from taking the 5th.

So, if I hear you correctly, what I think you’re saying is, there is a possibility that…

He was never going to prison based on Letitia Clark’s action. But judgments can be paid, assets seized, and loans called in. 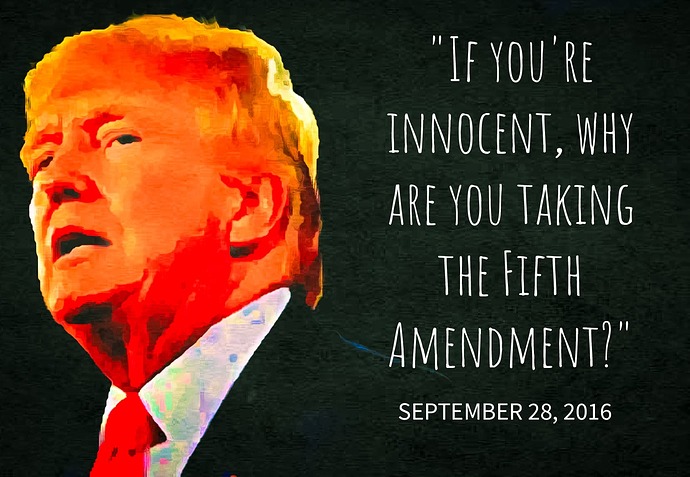 Look, we all know he’s not actually going to be able to keep his mouth shut for more than 24 hours anyway. He’ll probably blurt the whole thing on truth social while he’s on the toilet at 3am

We need a new word with fewer syllables to express the same meaning as “hypocrisy”.

Do we? Just call him a liar.