Get out your bingo cards!

Also reportedly a record first vehicle to hit both sides of the warning bar. 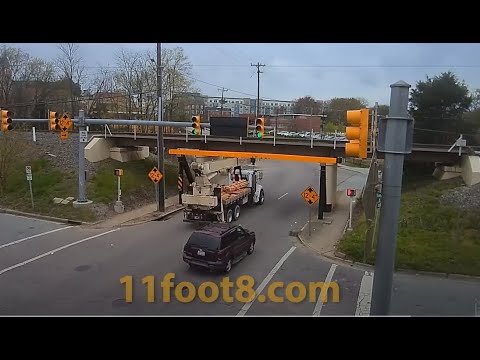 That one also managed not to trip the height detector. I’d have to guess this truck was 12’4.5" or thereabouts.

I would think the crane arm would be plenty for a beam detector. I wonder if the system has some other sensor, or what went wrong.

So it looks like it would’ve made it under the actual bridge, but not the “sacrificial” bar in front of it? Heh.

I saw plenty of bridge shaking. I wouldn’t call that making it under.

Let the tyres down slightly, they’ll be fine.

Perhaps there’s some sort of time delay, and the crane’s overheight bits didn’t linger long enough to trip it.

I saw plenty of bridge shaking. I wouldn’t call that making it under.

This. The bridge itself was struck and jostled. The crane essentially defeated the bar by getting under it and striking the bridge anyway.

You could kind of see the thought process in action: “It’s not that bad. If I clear the bar, I’ll be fine.”