I have a bunch of those, and they’re great. I was interested to note that the market has caught up with them though:

After extensive testing, we think that Energizer and Amazon Basics make the best AA and AAA Batteries for most people, respectively, though not by much.

“The Energizer Recharge line of batteries remains our pick for the best rechargeable AAs whether you’re using them on their first time or their 50th charge. Our runner-up choice, the Panasonic Eneloops, performed nearly as well, but we only recommend them if they’re on sale or you can’t find the Energizers.”

Shouldn’t these batteries be called “Low Self Discharge”? First time I read about “Low Static Discharge”.

Tenergy low self discharge are a good alternative. My period of ownership is only about 3 to 4 years, so I have no proof that their durability is as good.

I have a charging station that “rescues” batteries that otherwise seem to have worn out. Most of my batteries are AmazonBasics at this point, but I haven’t needed to throw away any brand of them, nor noticed much real-world difference in performance between the various brands.

I use a lacrosse charging station with a Discharge and Refresh setting. Takes around 18-36 hours to cycle a battery but will bring it back up from a slightly lower than “good” mAh, back to around 2000 for me. I see when it needs doing as the charger tells me the full capacity of each battery.

The batteries do seem to work nicely, but the charger could be better designed, in my experience.

That’s been my experience too. I’d even be willing to buy a separate charger, if someone had a recommendation for a good one that works with Eneloops. Showing capacity of each battery, for example, would be great.

People generally recommend this one 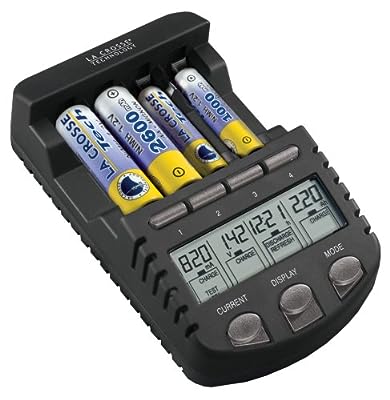 Recharge your batteries! Quickly and easily charge AA and AAA batters with La Crosse Technology’s quintessential battery charger. The BC1000 Alpha Power Battery Charger can be used to fill all NiMH or ...

Most of the La Crosse ones, like @jlw mentioned, are pretty good, though not exactly cheap.
I got this one a few years ago

Recharge your batteries! Quickly and easily charge AA and AAA batters with La Crosse Technology’s quintessential battery charger. The BC1000 Alpha Power Battery Charger can be used to fill all NiMH or ...

Edit: I see that @codinghorror beat me to it by few minutes.

This is the one I use. I can’t believe I haven’t reviewed it.

It is great. Check the display when batteries are full, and see how full they got. If its below 1900 mAh run the discharge/refresh cycle.

You can also select charge/discharge rates for gentle or fast charging.

I have the BC700. It costs a bit less ($32.28); it charges at a lower maximum rate than the BC1000 and doesn’t come with accessories to charge C or D batteries (which are so rare now, I’m not worried about it).

Supposedly the BC900 and 9009 have overheating problems at the maximum charge rate, but the rest don’t.

One thing about these chargers – a really low battery will show up as “NULL” and seemingly refuse to charge. (I often find that with one battery out of the three or four in an LED motion sensor light for instance, if I wait until the light is totally dead before I charge.) Just leave the battery in place for several hours and it’ll get enough of a trickle charge to be recognized and then the charger will charge it normally. Alternately plug it into a dumb charger for a few seconds.

Thanks to you and @crenquis for the quick and apparently best-choice answer, since both of you plus @jlw all agree on the same product.

Ya, I use the dumb charger. I’ll have to try just leaving them in the La Crosse next time.

JW, I was confused a while back when you were linking to those cheapies. Any reason you were buying the ebl’s when you already liked the eneloops?

Supposedly the BC900 and 9009 have overheating problems

add the “Nuon Ni-Cd & Ni-MH CHARGER” (all caps on the label) Model: NURECH4-4 to the list of battery chargers you could fry an egg on. [ETA: it’s a dumb charger in almost every sense of that word.]

The Batteries+ guys told me that it was my “bad” rechargeable batteries and not the dang charger even though the batteries (I don’t recall which brand) were never fully discharged, seldom used, and not more than two years old. Oh well, live and learn. I have some PowerEx rechargeable AAs that are just ok but not very lively even on a full charge.

Thank you all for the pro tips. Success here on this subject is as much about finding the right charger as it is the right batteries.

If you’re buying new ones, surely the Eneloop Pro is the way to go rather than the standard Eneloop? At least until they release the Eneloop Pro Ex Plus Alpha Champion Edition, anyway.

The one I bough will only charge 2 or 4 batteries at a time, not 1 or 3. That’s only possible with the more expensive model. And they are supposed to be at the same discharge level when you put them in. That makes the thing rather useless for me as I use them one at a time. I hate down-engineering, they put a team of engineers to work to produce an entry-level product with arbitrary limitations, so they can sell the “regular” charger at a higher price. IMHO, companies that engage in this kind of thing should crash and burn, it’s a waste of resources and a scam.

The report you linked admits that the Energizer self discharge is higher.

I replaced most of my rechargables with Eneloops a decade ago just because of low self discharge.
I was tired of having my regular rechargables discharge, so that when I needed them they’d lost most of their load.

With Eneloops, I can charge the batteries and then forget about them, they will be even useful after a whole year. So they can be used where you would use normal batteries in normal household items. Normal rechargables, not so much. You can’t store them charged for long, so you need to charge them close to the planned use.