Ha! I’m flattered you were moved to googling my conjecture

I hear Gillette is coming out with a fish that has seven butts.

“The best thing to do is keep an eye on the fish and if it starts to have difficulties I would put it to sleep.”

Makes me curious what bit of morphology this oddity developed from. If I recall correctly, jaws developed from pharangeal arches, some of which also develop into gill support structures. Even more interestingly: many kinds of fish have a second set of internal “pharangial jaws” in their throat.

Which gets me wondering if any of the following might’ve occurred during development:

“The best thing to do is keep an eye on the fish and if it starts to have difficulties I would put it to sleep.”

I thought “sleeping with the fishes” has Mafia-related connotations?

…but, maybe, the fish was talking too much…
…can a fish become a rat?

Keep an eye on it, if it opens its not-mouth - it’s fish food.

Keep an eye on it, if it opens its not-mouth - it’s fish food.

Definitely a case of you’re-what-you-eat, then.

Personally I am glad it isn’t a white pointer.

How does it taste taste?

That picture should require at least a click to get to, and be labeled NSFLA. Pharyngeal jaws are a "second set" of jaws contained within an animal's throat, or pharynx, distinct from the primary or oral jaws. They are believed to have originated as modified gill arches, in much the same way as oral jaws. Most fish species with pharyngeal teeth do not have extendable pharyngeal jaws. A particularly notable exception is the highly mobile pharyngeal jaw of the moray eels. These are possibly a response to their inability to swallow as other fishes do by creating a negative pr... 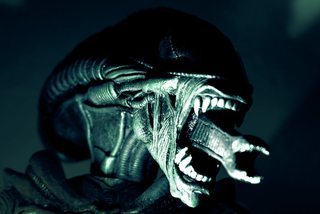