When you don’t know how to react, overreact! Works every time.

Despicably inevitable. I’m waiting for the investigatory powers bill to be rushed through uk parliament any day now. The debate on all this ranges from non-existent to ignorance. Isn’t now the time precisely when they should not vote on such legislation? The fuckers want us to do this to ourselves.

Government emergency powers must curtailed. They are too cowardly and craven to be given raw unchecked power.

My faith in government has been destroy. I now believe that the government should be a wiped and shackled slave that serves the common good through benevolent means. Every other action must be severely restrained.

They are too cowardly and craven to be given raw unchecked power.

Perhaps you would prefer the fearless Marine Le Pen?

Perhaps you would prefer the fearless Marine Le Pen?

“A sucks” doesn’t necessarily always mean “[even worse] B is better”.

These powers are too much, the wording too rubbery. Let’s watch how they will inevitably get abused and build a library of case studies for the next time and next place.

They’ve played right in to the hands of ISIS. Well done you dolts.

France has some kindred with abuse of authority. Le Pen is never far from real power.

Note I love France; and always (maybe) will. An entire country that celebrates enjoyment. And pleasure. And freedom …

Check out any “living in Sarcelles” source though. Check out police powers. Check out the “CPS”.

And the old Vichy regime. I lived in France a long time, and they never talked about it. No truth and reconciliation. I was id checked a good number of times.

“cowardly and craven” is meaningless agitprop.

What is with the lighting system on these things?

It seems to be some type of front projection…located quite a bit away from the object.

Eiffel tower lighting doesn’t seem like it’s on the structure but projected like the one in the photo of this submission.

And the Sydney Opera House also has to be projected.

It just seems like a very big leap in lighting technology…and something I want to learn more about. The Eiffel tower is pretty big and lighting it up with projectors is pretty impressive (if that’s what it is).

It is often called “projection mapping”. The trick is that software has a model of the spacial volume to be projected upon, which makes combining several projectors, or customizing the video to its surfaces and/or architectural features much easier than would otherwise be the case.

Projection mapping, also known as video mapping and spatial augmented reality, is a projection technology used to turn objects, often irregularly shaped, into a display surface for video projection. These objects may be complex industrial landscapes, such as buildings, small indoor objects or theatrical stages. By using specialized software, a two- or three-dimensional object is spatially mapped on the virtual program which mimics the real environment it is to be projected on. The software can in...

The fuckers want us to do this to ourselves.

They’ve played right in to the hands of ISIS.

This has been the standard line of thinking in a certain sector for a long time in regards to Muslim terror. Thing is this idea comes from a kind of oroboros navel gazing rather than actually listening to what various Islamic terror groups actually say internally and externally.

ISIS is quite clear about their goal of a 21st century caliphate run by their understanding of Qoranic law. France adding to the powers of its internal security services is really quite the opposite of what you two think IS wants. The situation is quite different than the Soviet invasion of Afghanistan or the US involvement in Vietnam where the local fighters understood that a strategy of exhausting the resource and will of the foreign forces would in fact cause the foreign forces to act towards the desire of the local forces, that is to say to cease the respective invasions.

As the Yiddish proverb says: “listen to your enemy for God is talking”. Don’t assume that past thought systems always apply to the present.

This has been the standard line of thinking in a certain sector for a long time in regards to Muslim terror. Thing is this idea comes from a kind of oroboros navel gazing rather than actually listening to what various Islamic terror groups actually say internally and externally.

Terror groups are full of shit. Like most extremist cults, the batshit leadership rarely practice internally what they preach externally.

We’ve seen well-documented evidence of this in the past. More recently, a longterm hostage got an inside view and overheard their various strategies. Some of which backs up the very posters you’re deriding in your post.

The hostage wasn’t eavesdropping from an ivory tower, he was right there with them in the proverbial trenches quietly listening and observing the idiots.

Your ignorance sparked by fear and cowardice plays right into the hands of both terrorists and corporatist war profiteers.

In the meantime, I suggest you head over to Democracy Now and watch the historic interview with American drone operator whistleblowers who just came out to expose how our actions are perpetuating, emboldening and strengthening extremists.

It’s time to stop allowing terrorists and corporatists to lead us into further death and destruction due to our own fear and ignorance.

I’m not going to allow stunted nut jobs to lead me around by my nose. Why are you?

Glad to see you are still as always. 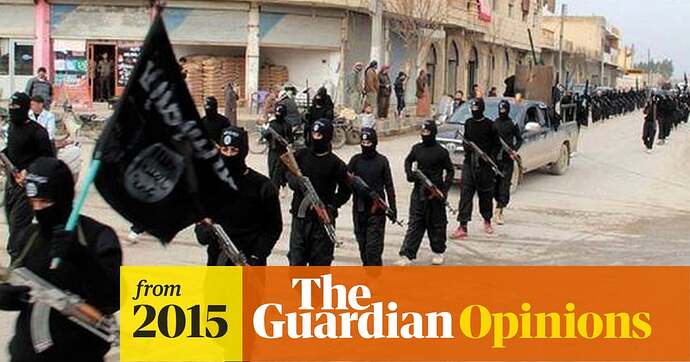 I was held hostage by Isis. They fear our unity more than our airstrikes |...

In Syria I learned that Islamic State longs to provoke retaliation. We should not fall into the trap

That would probably be this former hostage.

I think anyone trying to credit this lot with anything more complex than spreading fear is to overestimate their intelligence.

Thank you for the link @politeruin. Boing Boing also blogged it here previously as well:

Former ISIS hostage: they want us to retaliate

Former ISIS hostage: they want us to retaliate

And, here’s a major news story that the mainstream media is attempting to keep rather quiet at the moment that shows that our drone program creates, exacerbates and perpetuates a profitable “war on terror”: 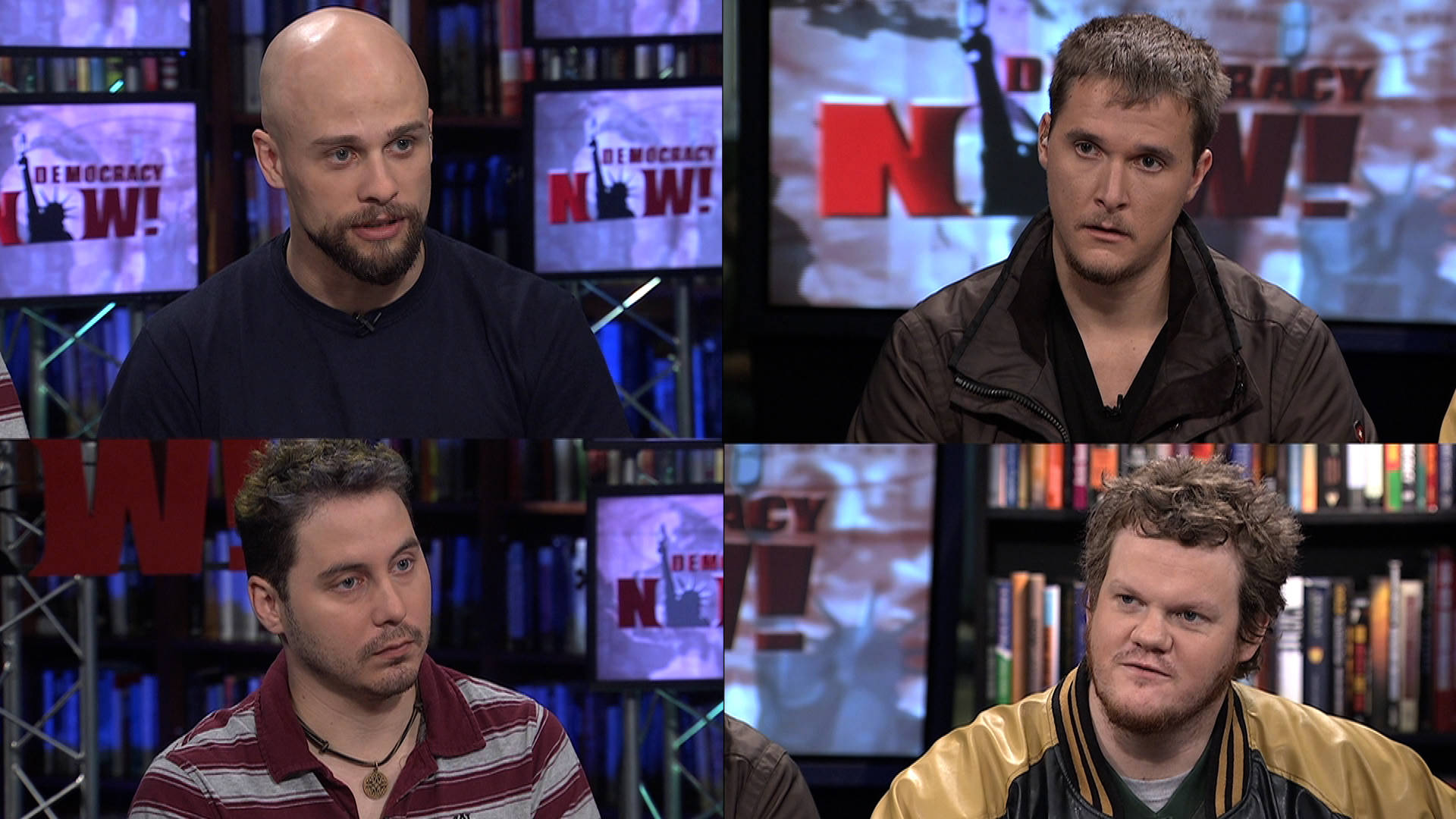 Has the U.S. drone war “fueled the feelings of hatred that ignited terrorism and groups like ISIS”? That’s the conclusion of four former Air Force servicemembers who are speaking out together for the first time. They’ve issued a letter to President...

@Israel_B, I have to ask… Are these Air Force service members who took an active role in the “war on terror” also part of the “ivory tower” brigade that doesn’t listen to terrorists’ demands enough? 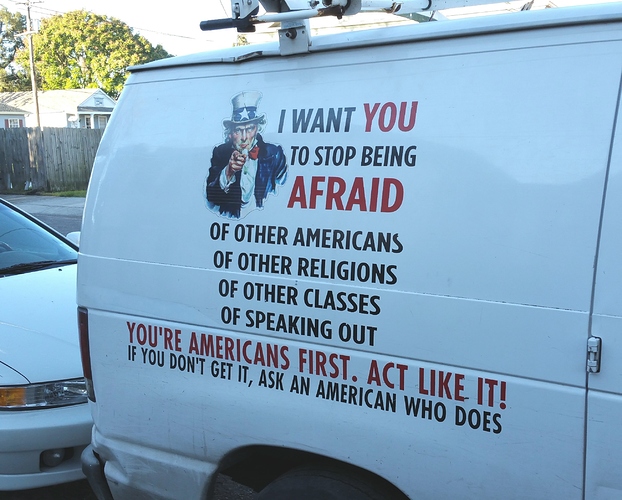 That graphic on the van is awesome. That’s some jingoism I can actually support.