Originally published at: French court rules in favor of man fired for not going out to drink with co-workers | Boing Boing

I really hate the “after-hours” pub culture in the states.

First, I can’t drink because of health, second, I’m not being paid for it, and third, we are expected to be there. And let’s not kid ourselves, most drunk people are not “fun”. I work because I love the job and pay is good, and I like the co-workers, but I don’t need extra time with them.

It’s discriminatory to Asians where about a third can’t drink without getting beet-red and also risk getting cancer or liver disease, and also blacks who don’t feel safe in some neighborhoods after dark (Edit: I forgot about religious restrictions against drinking too). I won’t mind it being made illegal.

I never understood the need for everyone working together to be besties. We are not family nor friends and you do not deserve that level of attention. You are a co-worker and we just need work together efficiently. I don’t need to know about your divorce or your problem kids.

Also I’ve seen some ugly stuff go down in after work drinking and then you’re supposed to do what? Not remember “Tod” called “Kate” a B* before storming out the door, yelling at the group through the window and bash his head when he falls on the sidewalk? Nope. No thank you.

Not to mention all of the very legitimate reasons like “I have kids or elderly parents” or simply “I don’t drink” (so much fun being the only sober person in the room) or maybe “I’m just tired and have to get home so that I can wake up at 6:30 am and start this ridiculous game of “go to work, earn money, so I can be “happy” all over again.

But we all are one big, dysfunctional family!

I typically don’t like after-work or weekend get togethers even if there’s no alcohol. Not that i dislike my coworkers, a lot of them are fun and we get along great but i highly value my personal time even if i don’t have anything going on after work. The last thing i want to do after a stressful work day is to spend more time around them and minding what i do and say to leave a good impression, as an introvert it’s exhausting.

as an introvert it’s exhausting

Unless the boss joins in and agrees to give everybody a raise and more paid time off if everybody buys them a drink, what’s the point?

Nah even with the alcohol that’s not enough to entice me. That’s not to say that i’m miserable hanging out at a bar while having a few beers, but it’s just not what i want to do with my free time.

i highly value my personal time even if i don’t have anything going on after work. The last thing i want to do after a stressful work day is to spend more time around them

I used to make up family issues that required me to leave on time. It’s sad that company management is allowed to pressure workers like this. From what I read about how much people are pestered in their off hours, it’s gotten much worse because they have more ways to contact them.

Man wins court case against employer that fired him for not liking boozy, forced ‘fun’ culture 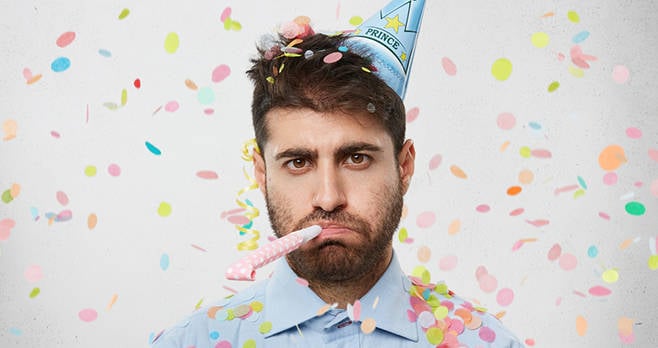 Man fired by employer for not liking boozy, 'fun' culture

You gotta fight... for your right... to not be an idiot

Additional info, links to the ruling and the employer’s homepage. 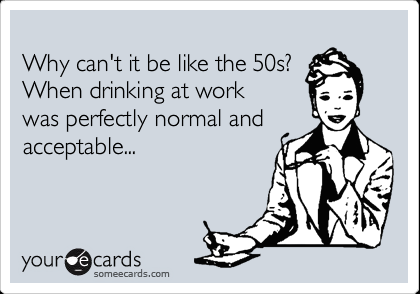 May the ones with strongest liver win.

But seriously, it really sucks if you can’t drink, and not entirely fair if the actual job doesn’t involve drinking alcohol.

In a different lifetime I worked at a small shop that consisted of the owner who rarely made an appearance, his partner that ran the shop and five employees.

It was nothing to go to lunch and never return to work because the one owner was buying lunch and drinks.

We always got paid for the day and we worked for time and a half pay to make up the work.

We were tied to the auto industry in Detroit so when they shut down for retooling we shut down.

It was during one of those shut downs that I quit drinking.

When we came back a co worker made it his mission to trick me into drinking. One day he spiked my McDonald’s soda. I caught it before drinking, it was all I could do to not beat the ever loving crap out of him. Everyone thought it was a harmless prank.

I quit that job which sucked because the pay was awesome. Apparently I should have sued.

Yeah, I’m all about avoiding any and all social activities at work. As others have so well stated, you’re not paying me for it, I’m not your buddy, I’m there to do a job not make friends, and I really don’t give a crap about most of you outside the obligations of relying on each other to do our work. If you expect me to undertake social activities, write it into the contract and pay me for those hours, otherwise, get bent.

I work from home now, so it’s a lot easier to say I’m not joining, but even when I wasn’t I rarely bothered. I haven’t been to one of our after-hours department picnics in seven or eight years, and I only went to one of them. I don’t even bother with the winter Holiday party (not least of which because they started holding it in early January, AFTER the holidays, when I’m no longer in a festive mood).

Thanks for that. Another charming workplace.

I heard an interview the other day with an employment lawyer in which she said something to the effect that anytime an employer tries to justify workplace conduct as “banter”, you might as well just file “no contest” to the claim.

The same probably applies to employers who claim to have a “fun” culture.

My response to the “fun” after-hours activities and team-building retreats pushed by the HR Culture was always a diplomatic version of “f*ck you, pay me”. That said, I was easily bought off with an expensive quality meal or a nice resort weekend as said payment.

I really hate the “after-hours” pub culture in the states.

I’m sure that it varies a lot from workplace to workplace, but is that something that the US in general is known for more than other countries? The linked article is about an instance in France, after all.

I’ve very rarely gone to bars after work at any of my jobs and I’ve never felt pressured to do so with the exception of the three months I spent working in South Korea. I don’t know if it’s the same throughout the country but man, the Koreans I worked with were pretty serious drinkers, and with a 6-day workweek they didn’t bother to wait for weekends either. Going out in the middle of the week to eat fried chicken and throw back soju and beer until past midnight was a regular occurrence.

Edit to add:
These numbers seem to show that my experience there was not unusual. 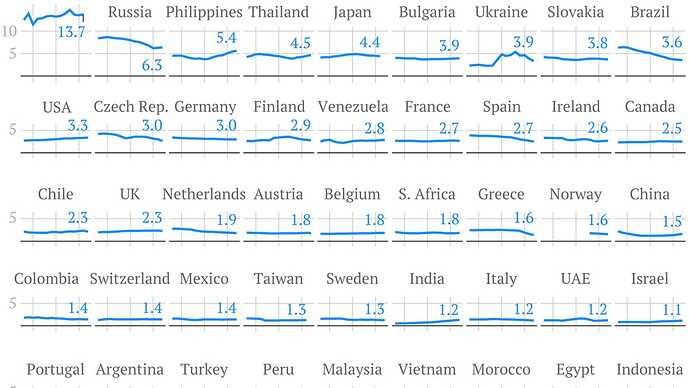 South Koreans drink twice as much liquor as Russians and more than four times...

The biggest hard alcohol drinkers on the globe aren’t cuddled up somewhere in sub-zero Siberia; they’re sipping on Soju, in South Korea.

Thank the Gods, I’m retired now. I have few memories of the “Team-building exercises” I had to endure. I have dismissed them from my mind as an encumbrance.The Sales team loved them. The Tech boys ( I was one) hated them. Have I ever felt more of a team-player for participating? Absolutely not.
Oh, and that sanctimonious story about the little girl and the starfish? Valid it may be, but each time I hear it again I want to make the storyteller eat a starfish.

Never heard the one about starfish, and can’t wait to retire just to avoid the non-essential social aspect of work (I love the techy part, and will miss it).

The story is pretty shitty analogy - I don’t think starfish would appreciate being flung into the air, if it even cared.

Years ago - back in the '80s when my career was getting started I was heavily criticized for not playing golf. Never fired, but told repeatedly that I’d never get anywhere until I took up the game. I didn’t, I still did, but what a pain in the ass it all was.

I like socialising with some of my colleagues, and would happily go for post work drinks, but any sort of “mandatory socialising” is about as appealing as a shot of raw sewage. Pay me for my work day, and the rest of my life is my own.