I still think of him every time I go through any store selling beverage gizmos.

if 23 ounces of tea/herb blend is enough for you, this is a pretty wonderful tea pot:
Hario Chacha Kyusu Maru Tea Pot, 700ml,
and it has a huge stainless steel basket inside. Well made, a delight to use. 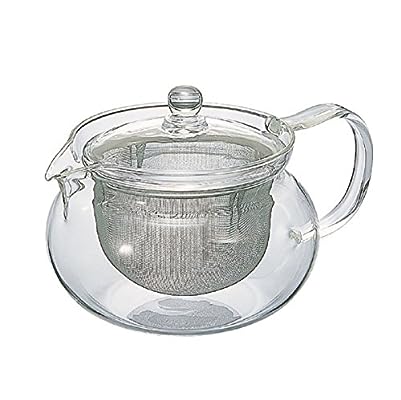 I have the Haario pour over thing, and use it 3-5 times a day. Word on the streets is that you can save a lot of money on filters by buying a #4 cone filter and folding it so that it comes to a point.

My wife has pointed out that we would go through less coffee beans and I would waste less time if I just used a drip coffee maker like a normal person. She’s right. But I’ll be damned if I’m going to take short, efficient coffee breaks. Hell.

My wife has pointed out that we would go through less coffee beans and I would waste less time if I just used a drip coffee maker like a normal person.

We could also save a lot of money and effort if we only ever drank water. We’re not on this planet just to be efficient. Viva la cafe!

While the Bodum Assam Tea Maker ist nice, Bodum’s CHAMBORD picture here ways way better with Assam tea, because the leafs can flow freely and it’s much easier to get the leaves out.
If you make tea all day this makes the difference. I’ve used this style of teapot for over 2 decades now and can highly recommend it. Just make sure you get a metal sieve, not the plastic one that is used in the cheaper version.

The tea maker may be perfect, but Teavana is the most ridiculously overpriced purveyor of tea imaginable. Go online to TeaSource and compare prices (the quality cannot be compared, good tea does not need to be flavored and most Teavana teas are).

First Boing Boing comment in a decade (then again, first time I’ve disagreed with a BB post in ten years).

I have a Bodam Assam and its a great tea-pot. Its perfect for making full pots of (in particular British style) tea. But its not so great if you want to make less than a whole pot. You can certainly do a half pot reasonably well, but due to the way the central press contraption is design tea doesn’t circulate as well when you start reducing the water. There are Assams with stainless steel filters that seem a lot more heavily perforated than the ones with plastic filters (which is what I have, and what is pictured). I’d sum they’d be better at circulating the water around, but you’ve still got a minimum volume because of the way the press has a non-perforated capsule at the bottom.

I find I don’t use it too often these days because I’m seldom in a situation where there are enough tea drinkers to burn through more than a cup or two.

Ah thank you! That is the one I have, and it is perfect for two decent size cups of tea. And it looks great.

I couldn’t find a link to my go-to pot for small amounts of tea using loose leaf, but here are two similar types:

Basically, the lid includes a French press-type strainer (but it stays in place, you don’t press down), so that the tea leaves have as much space as the water they’re in to steep…they’re not strained out of the water until you pour.

This is an ideal tea pot for any type of tea, especially whole leaf teas.

I selected the Clever Coffee Dripper over the Harios. 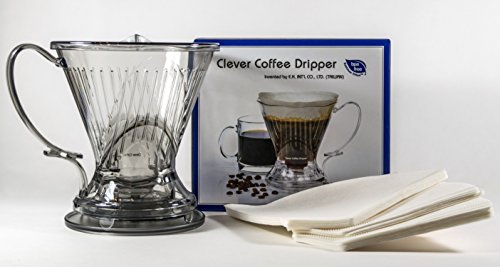 If Boing Boing was a blue inked memographed 'zine in the 70’s. We’d all be talking about the Chemex.

I like my Chemex flask. It makes a great cup of coffee. But I think it’s kind of best for situations where you have an audience. Otherwise a simple pour-over cone is the easiest, no-muss no-fuss solution.

"With the Chemex, even a moron can make good coffee.”

For a really good blast from the past of amazingly sexist things from infomercials.

The Vitamix. Was probably the first informercal thing that really took traction. But it was expensive. So, they had to appeal to the male of the house hold–that made the money choices at the time.

It’s amazing it’s mostly its about women. Swing to 13 mins…about “The Women will throw away the skin of the apple” with garden of Eden stuff…In “The woman destroys what God Made”…

I am a huge fan of Adagio, the sell a product very similar to the teavana infuser and have a wonderful selection of loose leaf tea (which they also sell in a bagged version if desired). They ship out of New Jersey which is very helpful for those of us on the east coast.