Gallery of space colony art from the 1970s

Space colonies are the holy grail of the Seventies Amish. @70sAmish https://twitter.com/70sAmish

Drat, it’s the same one I’ve seen before. I had one of these images as my desktop wallpaper for years. Been hoping to find a larger, higher-resolution version, and never was able to. 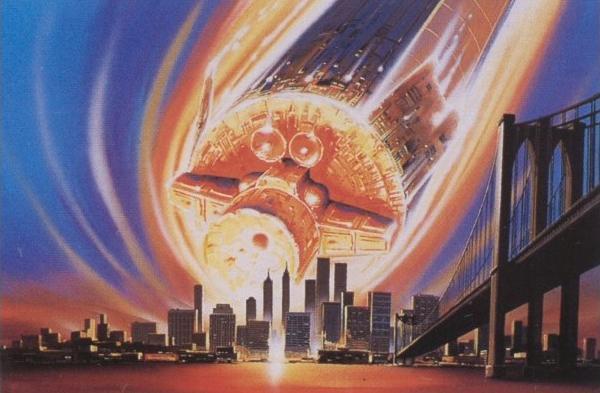 Still the first thing that pops into my mind.

They are not space colonies. They are paintings of the internet. You can tell by the tubes.

Most of these images are by either Don Davis or Rick Guidace, and many of them are famous for having appeared in Gerard O’Neill’s The High Frontier: Human Colonies in Space.

Discover Magazine did an article on them about a year ago: The Men Who Made Space Colonies Look Like Home.

I remember seeing and doting over every one of these Back in the Day.

In addition to the fannish L-5 society, there was a movement among right-leaning SF writers to promote space colonies. I doted over those stories and novels, too.

I eventually soured on the idea. A lot of the people pushing the notion I met at conventions seemed all talk, and seemed . . . off. Cranky. And their ideas and plans hardly ever changed.

Then there was this panel discussion about the future of cities at I-Con in 1990, and Bruce Sterling fielded a question about space colonies. He trashed the idea with a knowledgeable snarkery that was awesome and terrifying. It was like a great weight was lifted from my shoulders. Like: :“Yeah, that stuff is kind of wacky, isn’t it?”

I really do miss these visions of the future. They’ve always inspired and sparked the imagination.

Funny, my neighborhood in the 70’s didn’t look anything like that.

Maybe the ginormous solar mirrors and the whole-town-wrapped-into-a-ball craze just hadn’t reached us yet.

Yeah, I remember that the theoretical economic justification for these was going to be the construction and maintenance of solar power satellites beaming power down to the surface of the earth. It was awhile before I realized that even if solar power satellites made any kind of economic sense( there may come a day when they do), it would be much cheaper to pay the people working on them super high salaries to get them to put up with cramped unpleasant living conditions than to build large habitats to improve those conditions. After all, we don’t built floating cities in the Gulf of Mexico or the North Sea for the roughneckers operating the oil-rigs.

And to paraphrase what Sterling said:

There won’t be a lot of incentive to rotate crews very often, so you’ll be up there for a long time.

And the kind of people who would put up with those conditions would be kind of weird.

All told, it will be like attending a science fiction convention held in a submarine that you can’t leave.

When I look at the spinning, donut-shaped models, I can’t help but dream of living in a space colony with my grandchildren, and tossing around a football in our yard, and watching them fall to the ground when they run a pass pattern with a sharp cut that makes their inner ear get all mixed up.

Not cities perhaps but perfectly reasonable hotels. See this blog. Not sure about the Gulf but the North Sea probably doesn’t have that many roughnecks any more.

I love the concepts, but my god, the bad ones (like the one attached to the post) sparked some of my first actual anger at artists way back. It’s all oriented around one axis. Maybe two for toroids. Don’t have the ground pointing off at a random direction from the axis you just drew above it! It feels like a third grader drawing a house; they know perspective is supposed to mean certain things, but just can’t quite get it to actually work. “Look at all this space in the bottom left corner, I should stretch this out to fill it up instead of drawing closer stuff.” A lot of them just look like someone freehanded a crappy circle and decided “close enough, I’m going to draw buildings mostly perpendicular to this.” Except then they have the central axis that they actually calculated properly, and which puts the horrible perspective everywhere else to shame. It makes the rest look like one of those medieval tapestries with animals just thrown around willy-nilly. I mean, if they were actually going for that, I could see it working, but it’s clear that most of the time they were at least sort of trying to do it right, but so many ended up in this horrible middle ground of half-assed confusing perspective clusterfuck.

Whew. Anyway it does make the artists who are aware of complex perspective and who have actually thought out their artificial gravity really stand out, so it’s not the worst thing in the world.