I’ve got at least a half dozen of those somewhere in the basement in a box. Looks like the #1 with a photo of Nimoy is a pretty hot collectible on ebay right now.

As a young Trekkie, I’d get really irritated at what I found to be intolerable continuity errors, such as the spacesuits in the last cover not being the same as what was seen on the show (in “The Tholian Web”). Now, I’d just laugh at covers such as the “space pirates” one and decide that they could all be retconned as historically-inaccurate holodeck adventures from 100 years later.

And the best thing?

#These are all CANON!

Okay, I lied. I just don’t want to live in a trek-verse without awesome space-pirate-ships like this I love these. The Enterprise has big rocket flames shooting out the back of the warp nacelles, the bridge looks like the cramped interior of a submarine, full of mechanical switches and levers, and they commit genocide of alien species without a second thought. It’s Star Trek by people who had never seen a single episode of Star Trek and were trying to fit it into the 1950s Buck Rogers sci-fi style they were familiar with.

I remember buying these, or having them bought for me. They might have been reprints, early 70s.

Yeah, there were all sorts of oddities. In the one story I remember even a little, Vulcans of a past age literally bottled up their emotions. In fancy colored glass bottles. Someone causes trouble by busting them open.

Here is a link to the story I mention, from the site linked to by OtherMichael:

I couldn’t find the flaming nacelles, but I did find a second gallery that is mostly photo-based covers, but stool includes some awesome http://scifi-covers.com/post/112434216168/star-trek-gold-key-comics-1-10-rip-leonard 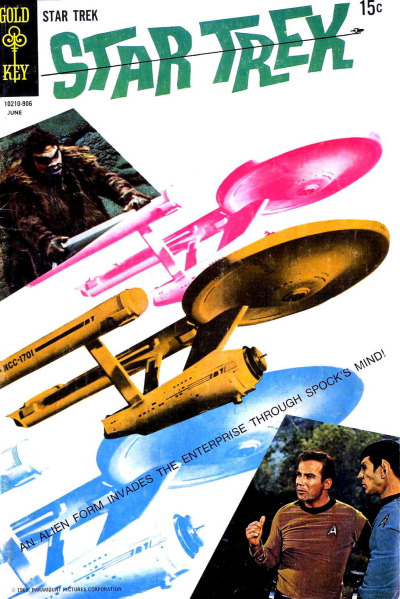 Whoah, looks like there were more than 60 published over 10 years. They’ve been reprinted BT Checker, and the covers are even worse, if that can be imagined

Memory Alpha gives more dirt, including making Len We as one of the writers, and the most prolific cover artist as George Wilson

Star Trek was a comic book series published by Gold Key Comics (part of Whitman Publishing), running for 61 issues from July 1967 until March 1979, when the series was canceled. Various issues were reprinted in a variety of formats over the years in...

Real World article (written from a Production point of view) George Wilson was a comic book cover artist. He is known for his realistic style using oils and acrylics. He worked for Western Publishing, doing the covers for a number of their titles,...

I thought there’d be some explanation here, like how the artist was in Italy and only had photos of a couple of the characters. That was the interior artist, though. Not sure, but the covers really look to me like they’re from the hand of one of the artists of those R-rated (maybe X; haven’t seen interiors) Italian comics loosely based on fairy tales.

When these were readily available, I scorned them. Ha ha. That should teach me. I’d really like to read a couple of these now.