A god game where you begrudgingly join forces with religious figures and you’re also an ancient wizard.

An online game where you memorize cops and you have infinite money.

“A student project where you rank regular expressions with a shovel.”

Shut up and take my money!

Using one of my normal phrases as a seed got me:

Which sounds fairly sane and doable. Expanding the phrase out a little more, though, came up with:

“An MMO where you heal sarcasm through religion.”

Who would want to heal sarcasm? I’d much prefer to heal religion through sarcasm!

An FPS where you time travel with the CIA but you keep jumping forward in time.

A horror game where you comment on education in the future.

Too scary for me. 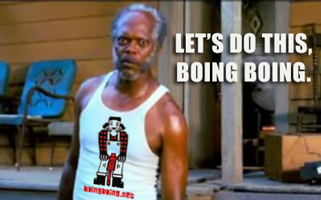 I’d much prefer to heal religion through sarcasm!

Jesus, I wish that worked.

It sure isn’t working very well for me on reddit.

“A social media game where you solve puzzles involving triangles to reach the highscore.”

“An indie game where you defy goths with geometry.”

Gah, it’ll be like school all over again. No thanks

An FPS where you go on a heist with rappers but only a handful of people remain.

So does this take place in Memphis or Detroit?

An artsy game where you annoy furniture to dominate the market.

The seed “sanity” yields “A war game where you stab cities and your arms are chainsaws.”

On the other hand, as a sarcastic person, making a game where you heal sarcasm through religion could ironically be quite a sarcastic endeavor.

A war game where you make peace with countries until you own everything.