Game of Thrones castmembers laughing, smirking or gritting their teeth when asked if they like the final season

In all honesty, I wouldn’t expect any of them to rate their last chance to work together all that high. After all that they put into it, no matter what ending they make, it will feel rushed. The episodes are longer, there is more going on, but that means if feels like instead of six full-length movies, it still feels like episodes.

And like I said, this is their swan song. Their last time performing these roles. Of course that is going to affect them. Acting for film is also difficult to judge, since what you acted on set may be used, may be cut, may be badly acted in your opinion but rescued by editing, or well acted and butchered in editing, how the heck can you have an opinion?

And finally, how else do you react to a gotcha question that you just know everyone is going to ask?

And finally, how else do you react to a gotcha question that you just know everyone is going to ask?

It’s not really a gotcha question: it’s the question every interviewer is guaranteed to ask of every person involved in the final season of a TV show. As answers go, this is clearly a cherrypicked set—but the cherries are quite unusual. Usually there are more practiced, awards-ceremony style stock answers.

What is the thought process of deciding whether or not their bank deposits are worth trashing the show’s last season?

I mean … maybe there is a reason GRRM had trouble finishing it, too ?

Patroclus had to have Apollo up his ass to have the Trojans kill him off.

The issue is, fans saying “this season/ending sucks” is faced with “you only think it sucks because its not ending HOW you wanted it to end”.

No…it sucks. Objectively IT SUCKS. And the issue is not in “Oh, but I would have done this” or “Oh, its so hard to wrap this huge story up”…no it sucks because 1) They knew the end was coming and decided to fast forward through shit and use lazy ass writing to completely end around what they did over 6 seasons; and 2) They had a terrible warning in front of them called LOST and they ignored those signs and did the same stupid shit those writers did.

So far, this season, I’m not very impressed (and I impress fairly easily). Episode one and two were fun; full of dialogue and interaction. But other than that, up to Episode 4, no one seems to have much agency.

What planning the protagonists have done this season has been muddled and poorly explained. What curve balls the antagonists have thrown them have be flat and unbelievable. The protagonists reactions to challenges seem to rely on plot armour rather than thought.

My prediction for the end of the series is…

I’m still hoping that my plot comes to fruition in the final episode, with Aryia killing Cersei, taking her face, and then abdicating the Throne in favour of Jon Snow. This has been by hoped for finally for several seasons now, and I’ve not watched Episode 5 yet (my sources are giving me a 4-4.5/10 score for quality of the episode), so this might be moot.

It’s too bad that the final season doesn’t live up to the beginning of the material. I think it really highlights the differences in production method between books and TV series. With the later, there are so many inter-dependent and expensive aspects that sometimes a production has to move forward even when the writing is sub-par, else the show will never be made. Unlike a book, where there writing is the only product and you can throw out whole sections and rewrite them at very little cost (…and still sometimes a book is never finished). I also think this show like other cultural phenomenons usually are like the dog who caught the bus and so can rarely live up to the expectations they never anticipated.

I haven’t watched a single episode of GoT, but I kind of imagine it must be like the way The Mentalist ended.

I guess that, at least, this series doesn’t bear the curse of Damon Lindelof, so it will be unlikely that the whole series will all turn out to have been the dream of a dying Bran (Spoiler Alert for Season One Episode One) lying on the rocks at the foot of the tower, while Jamie and Cersei return to their heavy petting. “It was all a dream!”.

Honestly…I think I’d prefer that to the ending they supposedly have planned via leaks.

I’m just going to go with one of the weirder games that I played of the GoT Crusader Kings 2 mod.

Yes, House Codd ended up on the Iron Throne. Do you have a problem with this? 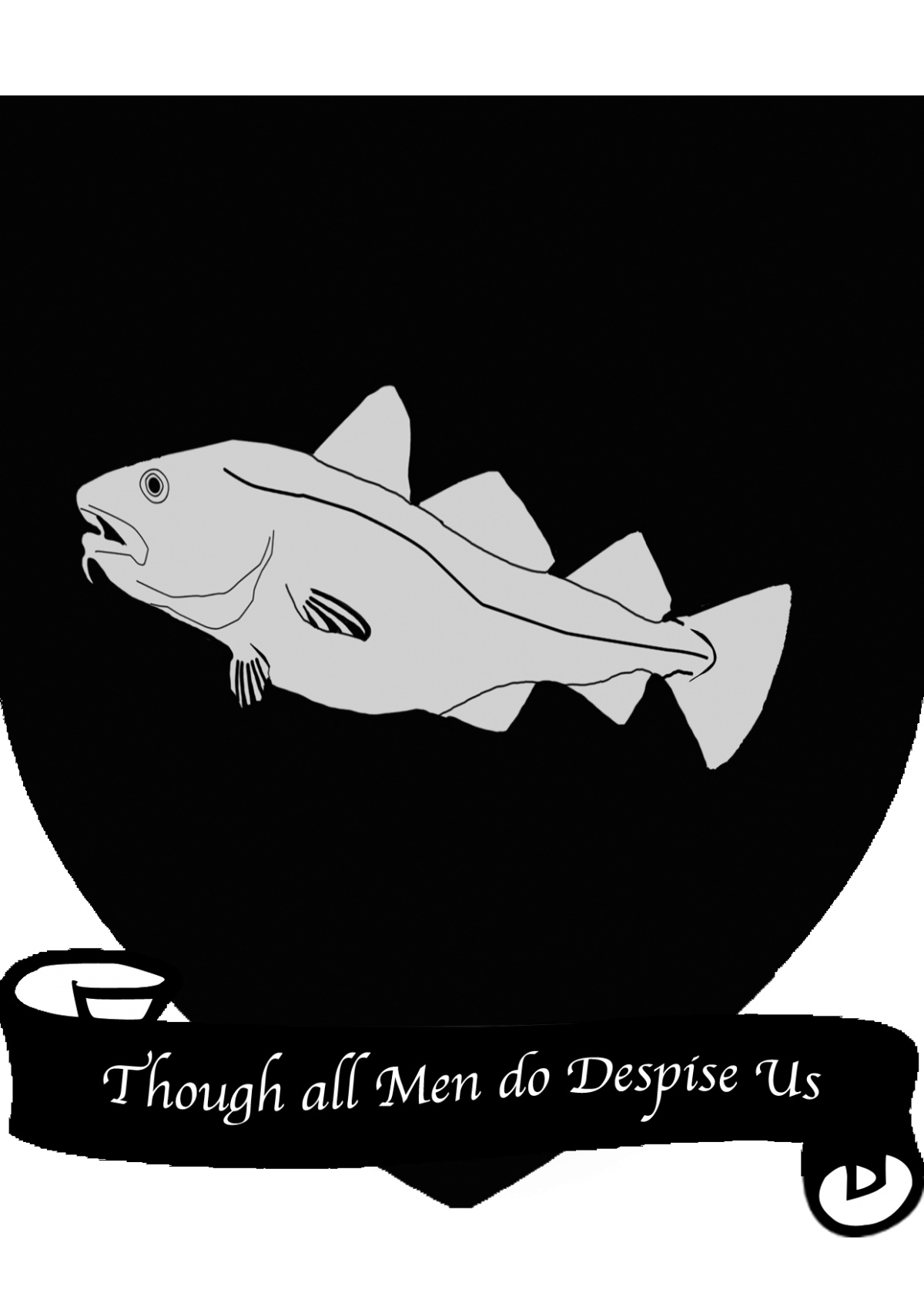 House Codd is a noble house from the Iron Islands. Their motto is "Though All Men Do Despise Us."[1][2] Their sigil depicts a silver codfish.[3]

My proposed finale, is, I would humbly content, forking mint!

What it seems to come down to is that they’re just not as good at fleshing out an outline as they are paring down the novels. They changes they made in previous seasons were reasonable and brought some clarity to a crowded field of minor characters. Now there’s no book, just a (we are told) “outline in a sealed envelope” that they’re working from, and one which you know GRRM will half tear up and rewrite once he gets around to actually fleshing it out. (Now why half of Dany’s actions fall 180 degrees off character? Who knows.)

Why did the unemployed actor get excited while looking through the bible? Because she thought she found a job.

Ya’ll are baffling me with these references.

It would be tough for any of the actors to say they “like” the ending when all the good guys are dead and evil continues damaging society.

I wonder if production companies can start keeping a show’s end date a secret? If this season was unfolding without prior knowledge that it was ending, I think there would be a very different reception.

(Now why half of Dany’s actions fall 180 degrees off character? Who knows.)

Is it though? She has had questionable moments, her lineage speaks for itself,power corrupts, tyrant killers becoming tyrants is classic story telling.

The Mentalist was a complete inferior rip off of Psych…at least IMO anyway.

I think you’re right–they definitely could have done a better job of not rushing some of the things this season, but Daenerys’ whole character for some time now has been centered around her belief that she has a divine right to be queen of a place she has no memory of and has no interest in actually governing. She’s always been a conqueror, not a ruler.