So, that would make me the only person who thinks of the Islamic terrorist group by the same name?

6 posts were split to a new topic: Attraction vs Objectification

I’ve been kicking around a story idea for years in my head. Something like the the various Twilight Zone or Outer Limits episodes where a female-only society suddenly has to deal with a lone man.

But in my version, all baby boys are blinded at birth. Only the women have vision. None of the men have had vision.

I think about this world a lot. And how different it might be.

That would be a great premise for a book!

The unfortunate thing is that there have been premises like you mention, but they are generally catered to male fantasies about getting laid easily. For some reason I keep thinking back to the Sliders episode "Love Gods." 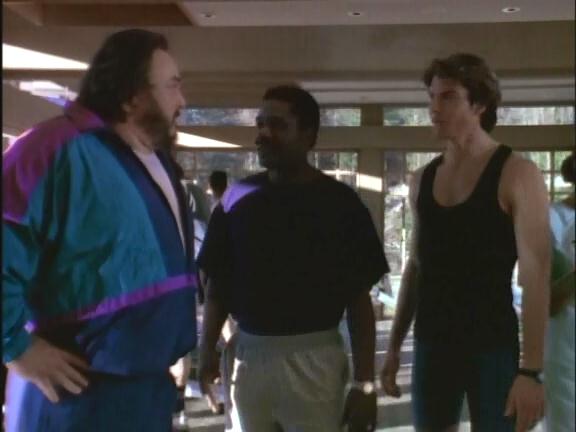 "Love Gods" is the second episode of the second season of the science fiction television show Sliders. It originally aired on March 8, 1996. The group arrive on a world where biological warfare has killed off most of the male population. Those who...

Yeah, I was super disappointed in the movie Blindness with Julianna Moore. So much raping!

've been kicking around a story idea for years in my head. Something like the the various Twilight Zone or Outer Limits episodes where a female-only society suddenly has to deal with a lone man.

IIRC the book had a lot of raping too… though I never saw the movie and I doubt that it was treated well.

But in all of these movies (and a darn near all of the 50’s and 60’s schlock sci fi) at least looking at them with a modern eye is some really cringeworthy sexism. Sometimes it simply just laughable exaggeration from a different time and other times you just wanna shout PIG! at the men.

I have never read Atwood and enjoyed American Gods. That as a frame to say people have different tastes, ain’t that great?

At the same end, I don’t get it when liking something is wrong, either. I have been told that I am a horrible person because I own more than one game device and use said devices to (gasp!) play video games. That I am (somehow) letting down all womankind by enjoying something that has the potential to enable horrible choices and behaviour. Or that because something I enjoy has problematic aspects, that it’s not good enough to recognise those aspects as problematic (and why they are problematic and not buy into those pieces) without discarding the whole. This includes works where the problematic issue is part of a historical context.

In short (too late!) tastes are tastes and everybody has different ones. You are not wrong for liking or not liking something. I just wish people on more sides of the “debates” could just accept that.

Funny, I myself was thinking of a revisionist Medusa and the Gorgons, where the neighborhood thug harasses three retirees by taking away their only monacle they own, before seeking out their sister and murdering her. Something about this really scared the crap out of a lot of his friends, especially the fact that he showed her severed head to many of them.

At the same end, I don’t get it when liking something is wrong, either. I have been told that I am a horrible person because I own more than one game device and use said devices to (gasp!) play video games. That I am (somehow) letting down all womankind by enjoying something that has the potential to enable horrible choices and behaviour

Haven’t seen the show, or read the book, but this article seems relevant, somehow. What Happens to Nudity Onscreen When You Remove the Male Gaze?

I Love Dick, based on Chris Kraus’s semiautobiographical ’90s cult classic, is in-your-face female. It is the story of indie filmmaker Chris, who finds her voice through a relentless sexual obsession with a professor and artist named Dick. To adapt the book for TV, co-creators Jill Soloway and Sarah Gubbins assembled an entirely female and gender-nonconforming writers room, which inspired the production’s department heads to do the same. All of the camera operators and focus pullers were women, except for director of photography Jim Frohna, who hired them.

The result, according to the writers, actors, and directors involved, was a nurturing, patient, and nonexploitative environment that sparked a spirit of collaboration similar to what Soloway has created on her other show, Transparent.

Always, always, so much raping. Need to more your story forward? Rape her (or in very few circumstances, him)! It’s a panacea for plot points. A deus ex machina for character motivation.

I love Game of Thrones, but this happens far too much in the show.

I do, however, like that it looks like it’s going to be shaping up to be a war between the women in the show. Pretty much, other than Jon, almost all of the power players left are women!

Of all media, I can think of one TV show that treated the subject of rape both directly and appropriately and one movie. Compare that to the hundreds if not thousands of times it is a plot point (internationally even) across media I have seen and that’s an impressive problem - especially since I’m not seeking it out. Even then, I worry that where I felt it was done with the consequences and gravity it deserves… well I worry that I’m too outside the subject to be a good critic.

I would name the names of what I think but it’s so far off topic. I just think of it in relation to this thread because all the sexy dead women props used in media.

Didn’t Cercei have a really strong quote early on about survival? I need to rewatch that show and catch up eventually. I loved it but don’t have HBO and have a massive backlog of shows I’m watching.

I’m still trying to get through the new MST3K and it’s funny female villain.

Oh yeah… she’s all about survival, but I think they’re trying to draw parallels between her and the Mad King at this point… I do think the show has an objectification and rape problem, but I also think they do a great job of showing realistic ways in which women function within and even gain some real power in a patriarchal society - it’s women from the elite class, of course, but then you have to women of the Wildlings, who are pretty much equals with the men. All the women who’ve wished to be something other than what society tells them to be have a tough time of it, but they’re doing it anyway.

I loved it but don’t have HBO and have a massive backlog of shows I’m watching.

I’m in the same situation! And now Twin Peaks and American Gods are out! FUCK! Too much good stuff!!!