I can’t wait for the 34 movie adaptation!

I thought Maze runner was already made into a movie.

And they’re clumsy! I am in love with this strong female character already.

“I got my number for the Winnowing today. It is low but not as low as Liberty McDonald’s.”

If only they knew where this would lead, in the Before Times.

Say what you will about the before times, our administrators are far ahead in Hat Technology.

Not to mention technology in general, which they use to organize incredibly complicated blood sports rather than anything useful. 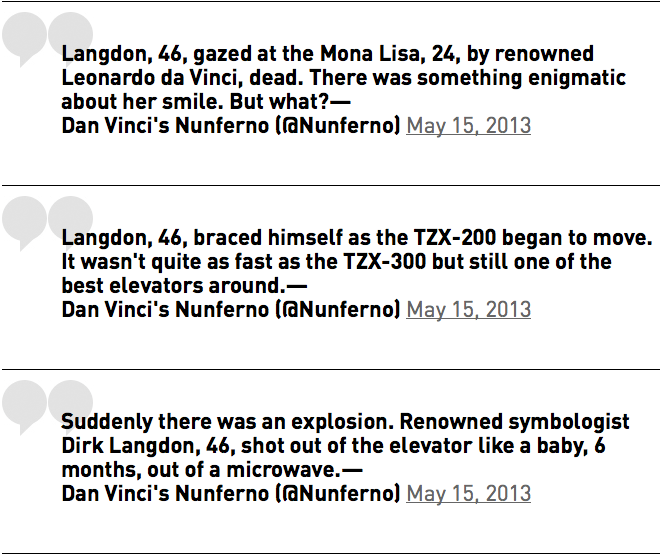 "Every one of us who had a decent size dog took it to the Reccr. Some of the kids even bought dogs they just made friends with. The Reccrs gave you a meal even if you flunked complete, and if you just had a mutt you really didn’t know there was no chance of going on to the dangerous part where you could lose it all.

Damn if they mutt I made friends with was a perfect match."

And no, I’m not linking. If I were to link to tvtropes, I would become the evil I abhor. Also I would get caught up reading it, and never get anything done.

You can’t tempt me to look it up. I’ve been six months clean off that junk, and I’m not throwing away my sobriety.

But, dude, Tropes are what make us human…

PS: surely someone has written a cyberpunk novel by now in which everyone identifies everyone else by their tropes. I guess “Interface” is part of the way there with its demographics.

Uh, maybe Ghost in the Shell. It uses memes properly, and categorizes people as either free, under the influence of various memes in a stand alone complex, or completely brainhacked

Although Tropes are a very specific subcategory of memes.

As the waterboarding began, he wondered if he should have taught all those other kids to use encryption…

I thought The Toast did one of these already, but no, that was High Fantasy. Oddly enough, it still applies astonishingly well.
http://the-toast.net/2015/01/23/tell-high-fantasy-novel/

The bits about the City and the Sea not having any other names is definitely not high fantasy. In high fantasy, there’s always a proper name, and usually a couple of poetic epithets or mocking nicknames, depending upon which flavor of high fantasy this is exactly.