I don’t remember ANYONE hating Threepio. I think George is projecting. NOBODY LIKED YODA? Jeez. I’ll give him the Ewoks. Robin calling Darth Maul “A Maori and a Mime” is CLASSIC!

I don’t remember ANYONE hating Threepio.

Well, besides all the other performers…

I remember everyone loving Yoda and whomever could do the best, VERY UNDERSTANDABLE, Yoda was revered.

This is just more evidence on how completely out of touch Lucas became with the fans over the years.

I’ll give him the Ewoks.

Scattered grumbling about them being a toy merchandising opportunity aside, I never saw much fan hate for the Ewoks. In contrast to Jar-Jar, they served a legitimate narrative purpose that went beyond “let’s make this entertaining mainly for little kids.”

I smell “pity party” all over this.

Huh, I always thought the Jar Jar hatred was due to the over-the-top racial tropes and infantilization of the audience. I stand corrected.

No you don’t. You were right the first time!

I don’t remember ANYONE hating Threepio.

You have to remember that this is coming from someone who is infamous for trying to rewrite the history of his own franchise.

Clearly he was way off base with the “people hate cute characters” thing since audiences couldn’t wait to learn more about BB-8 and Porgs even before those movies came out, to say nothing of the public’s love for Baby Yoda.

What’s really missing in his argument is that people still hate Jar Jar. Now why is that George?

There was an interesting fan theory that Jar Jar was actually the Sith Lord, and as analyzed would have been worth the initial cringe: https://www.reddit.com/r/StarWars/comments/3qvj6w/theory_jar_jar_binks_was_a_trained_force_user/

Jar Jar = Keyser Soze is a fun interpretation of the film. Much better than him being in earnest.

Honestly, I hope Mike Meyers gets to listen to this, and that he feels justifiably great that these two people were so familiar with his work. I mean, Lucas just throws out the name of a character conversationally, and Williams just picks it up and starts riffing on it. I would squee so loud.

I think that Mork is perhaps the only being who would understand or sympathise with Jar-Jar.
Perhaps they come from neighbouring planets.

Watching the elder triology with a young relative for the first time,
was super pissed about the changed ending in Return of Jedi.

Why the hell would badly CGI’d citizens of the universe be more interesting than hanging with my hero homies. I nearly burst my lips learning to play the trumpet high note on the EWOK song back in the day, and then it was just gone! gone!

I think the Ewok Hunt in Battlefront 2 changes the Ewok narrative nicely.
Terrifying in every way. 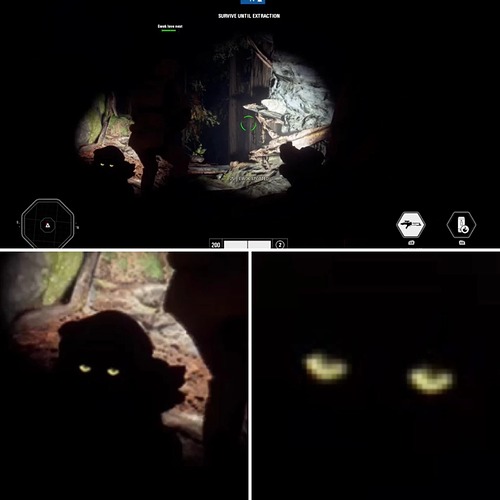 My source deep in side the Lucasfilm Empire told me that George showed up to a development meeting for Jedi one day with his daughter’s teddy bear, put it on the conference table, and asked how it could be worked into the movie. And that, apparently, is how we got Ewoks. Or so I’m told.

Even setting aside the racial tropes (which, to be clear, are cringe-worthy) I think the biggest difference between Jar Jar and those other characters is that he’s not just humorous, but silly. When 3PO is onscreen, I can laugh at things he does/says without it taking me out of the story. The characters are funny, but the story is still serious. When Jar Jar is onscreen, it feels like I’ve stepped out of the story in order to take a slapstick break. His pratfalls are there just for their own sake, they don’t add to the story. They could have easily established him as a bumbling character without going so over the top.

It’s like if, when 3PO gets put back together backwards in Empire, we had to endure a 5 minute skit of him trying to walk around without seeing where he’s going.

I think the Ewok Hunt in Battlefront 2 changes the Ewok narrative nicely.
Terrifying in every way.

The Ewoks were about to eat our heroes. If it weren’t for the paranoid android, they would be the main course of the night.

Which makes us wonder what became of the poor Stormtroopers.

Not a fan, but I feel bad for all the grief Ahmed Best got for playing Jar Jar. And from what (admittedly little) I’ve read, it was not only Lucas who was surprised by the backlash, but the entire cast. I think they all he was going to be a hit.