Apart from the obvious bs of the assignment, I thought they had mascots already, like eagles and wolves?

This is stupid. How can you post a story like this and not include some of the designs?

You will create a COLORFUL illustration of the mascot

Give the mascot a NAME.

You will create a COLORFUL illustration of the Nazi mascot.

A bight red symbol seems best… like a armband or hat or something? I know! A 'MAGA" hat! Like America wasn’t great until the current buffoon stole the office… it is to laugh. Tinged with crying perhaps.

You will create a COLORFUL illustration of the mascot.

I have an idea for an orange one.

At least they didn’t suggest designing a board game. 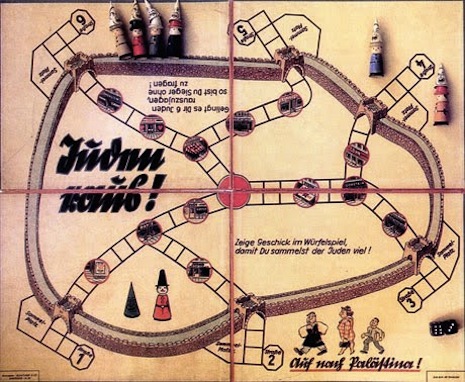 ‘Juden Raus’: Nazi-era anti-Semitic board game where you deport the Jews

Who would have guessed that the Holocaust wouldn’t make for a perfectly peachy board game for the little German children of the Third Reich? As it turns out, getting rid of all the Jews just isn’t that much fun. (Of course, given sound game design...

Holy shit, I thought the corporal’s name was a joke, but there’s really people with the last name warholic.

A better way to connect with the kids would have been to ask them to create a modern mascot for fascism. A creeping red-and-black slug tinged with gold flakes and covered in patches of orange hair oozing out from under pavement cracks would do nicely.

I’m sick of Nazis. I thought with the whole Godwin thing on the Internet for DECADES, and the general disfavor and everything negative that we wouldn’t be having to deal with goddamn NAZIS on our doorsteps. Come on. That is the last thing I thought we would need to deal with. It’s sick.

There are no words for how tedious this shit is getting.

Nazis aren’t a bad clothing or music trend; they don’t fucking get to come back 'in style.'

I’ve come to the depressing conclusion that this is what happens when an historic horror passes out of living memory. For a long time I assumed that the historical record and popular culture could hold the line – all those museums, university departments, movies, TV shows, novels, video games, non-fiction books. However, seeing what’s happened over the past couple of years, all I can observe is the effect of losing too many great-grandpas and great-grandmas who would have responded to any suggestion that “maybe we should give fascists and right-wing populists a fair hearing” (or “design a friendly and colourful Nazi mascot”) with a smack upside the head.