After Trump, boys at her daughter's school Nazi-salute in the hall. Here's how a mom responded

I am going to go for a walk now and do my utter best not to scream MOTHERFUCKINGFUCK at the top of my lungs.

I have no idea what to do about people who want to watch the world burn.

I can easily remember kids drawing swastikas in the 70s, even though they probably knew almost nothing of history. The same kids decorated their notebooks with “666.” I doubt they read and understood Revelations. They only knew it was naughty.

Today, kids know it’s naughty, even if they know nothing else. The real danger is when real fascism starts to look cool. I thank God for Donald Trump, who is making fascism look ridiculous for a whole new generation.

And this type of behavior is becoming more common:

HARTFORD, Conn. (AP) — The principal of a suburban Connecticut high school says some of his students crossed the line into hate speech when they taunted basketball players from a 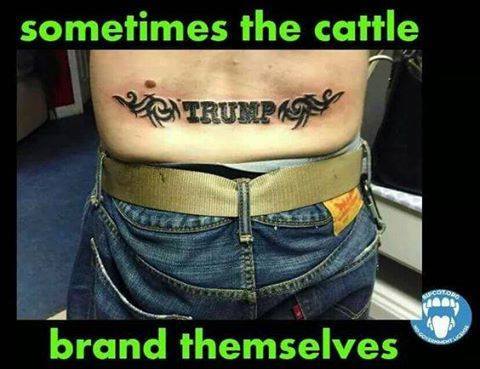 My question is - and pardon my Old English (or is it Middle?): What the fuck fuckity fuck are the parents of these kids doing? I sincerely hope that they aren’t teaching it to them, or just as bad, ignoring it.

As screwed up as my family life was, my older brother and I learned about respect for other human beings. We weren’t brought up in any particular religious way, but we knew it was wrong to make fun of someone who believed in God, even if we may not have, and even if we thought it was silly.

Dad fought in the Pacific in WWII, so there wasn’t so much anti-Hilter/Nazi talk in our family. But we learned from books (I read “The Rise and Fall of the Third Reich” when I was around 12), and from other sources that it was wrong, from every standpoint, to do what Hitler and the Nazis did.

Um, trump-stamp…
…isn’t that the handy platform that catches the, well, you know, the stuff?

Yeah, uh… no.
Many kids are encouraged to act like their parents right? Many parents are assholes.
The first time I saw my mothers neighbor run a stop sign with her kids in the car I was surprised.
After a while it just seemed about right.

Yeah, I coyed that up a bit… my original version just seemed too… crass.
Even to me.

No, the Trump Stump is on the other side.

Makes them easier to find!

I agree about the ‘punk’ aspect of swastikas, 666, anarchy As, etc. That it’s just naive kid crap.
However, these days, it’s no longer that. They know that it is specifically used for showing hate for Jews, Muslims, Black people, all of that. They see it in the news and online. They aren’t trying to be naughty, they are being serious.
And don’t think trump is making it look ridiculous, because all those people that thought fascism actually looks cool elected him.

It’s time to bring out the WWII documentaries about the holocaust in all it’s graphic horror. Required viewing.

Gee. I so hope he doesn’t contract some deadly, flesh-eating staph infection.

Exactly. I remember much the same from my school days. 666. Swastikas—and this among a people who were on the same extermination list as the Jews, mind— the lot. A certain type of kid will do anything as long as the adults give off the vibe that they’d desperately not want them to.

If doing a Nazi salute (which takes all of three seconds) is enough to get the Establishment really angry at you then by God that’s precisely what these kids will do, especially if this also adds a frisson of them being _dangerous._Oh, god, the snot-nosed little asshats love that.

The solution is to get these kids but not for the Nazi stuff. Ignore that, focus on other stuff, preferably something that’s profoundly uncool. They’ll get bored. Eventually. Very eventually. Sucks, but there you go.

It’s time to bring out the WWII documentaries about the holocaust in all it’s graphic horror. Required viewing.

Thing is, far too many of these people will be cheering for the Nazis and taking notes if they’re required to watch those.

So, first of all, I want to say I don’t like, nor agree with the attitude or behavior of the kids in any way. And I don’t pretend to know all the details of the situation. But freedom of speach has to be protected, even/especially when people say things we don’t like and/or don’t agree with. I was in middle school in the '80s and saw plenty of similar behavior, you just ignored those people knowing they were simply not worth your time. That said, if there are specific threats of violence, the freedom of speech ends. So the school’s hands simple should be tied, until or unless such specific threats of violence are happening.
I will defend, until my dying breath, your right to disagree with me or anyone else. I will defend your right to say provocative, rude, insensitive, and even derogatory things. Because that is what America’s freedom of speech is all about.
The US Supreme Court has ruled most non-violent actions, such as solutes, or even “flipping someone the bird” an act of expression that is also protected, deeming the freedom of speech extends to non-verbal communications.
So, the answer is not teaching our kids to be so easily upset by others, it is not teaching them to shout down opposing views, nor to respond to what we deem poor judgement, poor behavior or anti-[whatever] in an hostile manner. The answer is to teach our kids how to peacefully co-exist with those we find vile and offensive.
We can’t rant about “tolerance” and then accept that we can be intolerant of those with whom we disagree.