Anyone here made eggnog before? I made it once but years ago with the help of a friend. Was curious what the thoughts on this was. I sort of got a little bit lost reading the recipe since some steps are a bit vague.

That is even better than Dean Martin’s burger recipe… 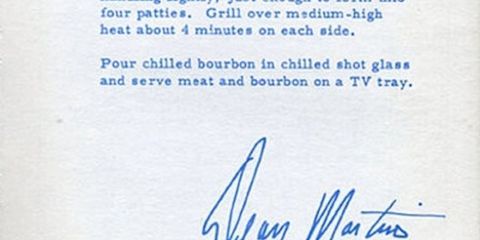 Is this available as a step by step recipe? I´m afraid my stream of consciousness cooking skills are insufficient.

I think I’ll pass out hammered, but wake up loose like a bass-plucked chicken.

I´m afraid my stream of consciousness cooking skills are insufficient.

This is an abstract expressionist recipe; the telling of it is supposed to evoke the state of having had one too many egg nogs (the state known as “over easy”).

I’ve made (non-alcoholic) egg-nog before, and it turned out well.

in a cocktail shaker:
some ice cubes
an egg
a shot or two of rum
a generous teaspoon of sugar
a bit of nutmeg
a bit of cream in there if you’ve got it
milk to bring it up to the size of your mug

add to the yolks and beat a bit more:
1 litre or more of liquor - whatever combination of bourbon, rye, rum, brandy you like and have on hand. Use decent but not top shelf stuff
2 litres of coffee cream, or 1 litre each of heavy cream and milk

fold the egg whites into the rest

cover and leave in the fridge at least overnight. You’ll need to fold the whites back in before serving.

Am I the only one who would rather just have a scotch (rum, rye or bourbon) neat with a cookie or something on the side?

The trick is to drink the egg nog before you make it. . .

…that guy was pitchin’ with purpose!
He put in…

Which are, statistically speaking, insignificant.

Some speculate that the booze kills bacteria.

Which are, statistically speaking, insignificant.

Some speculate that the booze kills bacteria.

As I said, I’ve made egg nog myself before, without even the alcohol, and I used normal eggs. Didn’t hurt me at all, far as I can tell.

I doubt egg nog is high enough proof to kill the bacteria, but it’s like eating rare meat. Most of the time, you’re not going to get food poisoning, and when you do, you’ll generally recover.

As I said: it’s the same risks as a raw egg: it’s up to you whether you want to risk them.

Totes right, and besides you are more likely to get poisoned by raw spinach (I made that up, but its kinda true, but I still made it up)

Using data from the 1990s, the Centers for Disease Control and Prevention estimate that one in 20,000 eggs is internally contaminated with salmonella. Since salmonella prevention practices have improved since then, the egg contamination rate is probably even lower now—indeed, according to Patterson, in Pennsylvania only 0.012 percent of eggs from salmonella-infected flocks are contaminated.

…And even if you are exposed there is a good chance you won’t even get sick.

tl,dr This is another one of those “risks” that basic numeracy can easily put into context. Driving is more dangerous than eating raw eggs, but you don’t see people in the office piping up about “rolling death traps” every time someone mentions they commute to work in a car.

Alton Brown has the best eggnog recipe that I have tried thus far. It really does need to age for the listed time, though. I haven’t made a batch this year, and may well have missed my chance.

If Alton Brown says I can drink right away, then that is good enough for me. I think I’ll get started on Sunday