Any good equivalents for those of us who aren’t iRobots?

Mind you, I think you’re better off just getting a battery pack. For the $60, you could easily find a 10,000mAH battery which will charge every USB thing you own, not just exactly ONE device, which you’ll replace in a year…

Not only that. Such a power pack can feed all sorts of USB-powered gadgets. I just modded a battery powered soldering iron so it uses such power pack (or a smartphone charger) instead of AA cells; a rechargeable multiuse power pack is always at a known place because it keeps being used, too, instead of batteries that die over time and you find your only set is in the gadget, leaking, and more dead than a three days old roadkill in a hot summer day (okay, okay, that one tends to be pretty alive again by then, but anyway).

The only way this thing would be even slightly useful to me would be if if Otter collaborated with Ye SuperThin Battery Co and created a mil-spec dust-resistant, crush-proof, water-resistant case. The extra-ugly extremely robust Otter case I have now has prevented so many accidents with my current iPhone I’ve probably gotten my ROI >10x and after I replace the rubber gaskets this year, I fully expect that case to keep on going for another year or two.

I think you’re better off just getting a battery pack.

Such a power pack can feed all sorts of USB-powered gadgets.

These do work well, and retain a decent charge for weeks:

Get the most reliable emergency LED light with the Torch 250 Flashlight. Built-in USB port, solar panel and hand crank for bright light and power anywhere.

These underperform, I feel like their depth of charge is minimal, smaller is not always better:
http://www.conceptgreen.com/our-products/solar-chargers/8/334/all-products/P-cgsa3610-battery-solar-assist-charger

Assuming you don’t park in an area with a lot of car break-ins, you can leave these on your dashboard to charge up, or find a sunny window where you work. Both can be charged by by micro-USB in addition to the sun. The Goal Zero has a crank, if all else fails.

I’ve got one tiny Eton “American Red Cross” solar/handcrank AM/FM radio that claims to be able to charge… something… via its micro-USB. Best use for that thing is likely when you’re in a bunker and you have a lot of time on your hands to turn that crank. Maybe while you’re praying or pondering what to do after you run out of crackers and beef jerky.

Next time you’re looking for a solar charger check out Anker’s line of Solar USB Chargers. Keep an eye on the sales, natch. In solar power, surface area is directly related to power output.

I have the 14W model - this thing rocks - it can charge my tablet and the external battery at the same time.

Oh wow that’s a nice rig, that 14W setup. It folds up so compactly. Yum. Looks like it’s for sale in the UK or France only… but this: 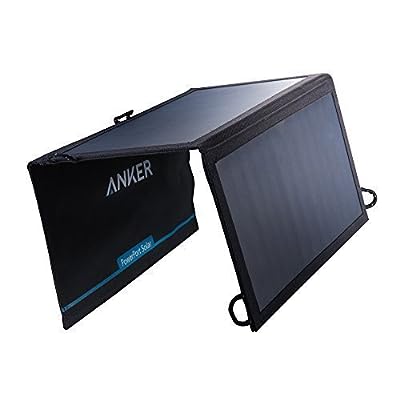 Woah, that model is bigger, that is, it has fewer panels, each with a larger surface area. For a few minutes, I thought were using new/cutting-edge solar cell technology, because there were only two panels, but they’re much larger each. The smaller/more panels model is still available, just not on sale at Amazon right now.

Only buy it if you need it, that other model will go on sale, eventually. Or, you may figure out that other companies’ models are the exact same thing…