I’ve been seeing this excerpt lately - the original video is quite cute as well:

At the Boulder CO Zoo, you can buy crackers and feed them.

There isn’t a zoo in Boulder. I think you’re thinking of Cheyenne Mountain Zoo in Colorado Springs.

Giraffes seem to have lots of curiosity, they like to check things out. When the San Diego Wild Animal Park had gazebo on stilts in the middle of their African Plains section, you’d be about eye level with the giraffes as you walked on the wooden footbridge to get there. Once we were wheeling my son in a stroller there, and one of the tallest giraffes paced us, then leaned its head down and we stopped. Then before we could move, it leaned over more and got its face right down to a couple of inches away from our son. He was too young to care, but the giraffe studied him quite a while, the straightened up and gave us a look, and then sauntered off. We hadn’t moved a millimeter, it was fascinating and a little scary at the same time.

I am. You’re right. Thanks for clarifying. I’d feel bad if a family showed up to Boulder and all they saw for wild life was unbathed hippies.

Thanks, I was wondering what was going on in the background. That was much cooler than a close-up of a CG giraffe.

It’s weird to me how few people notice what’s happening in the background of things, even when it’s much more interesting than the foreground.

They’d be decades too late. All students, yuppies, techies, scientists, and various jock / outdoor sports types here now. Better head up to Ned or better yet Ward if you want hippies. We do get bear, racoon, deer, and elk in town though, so there is some wildlife.

Giraffes are cool, but beware of imitations:

That’s very neat. I’m also quite pleased that they got the giraffe’s gait right. Unlike nearly all large quadrupeds, who have a diagonally opposite gait, giraffes move first both left legs then both right legs/vice versa, instead of front-left back-right to front-right back-left.

It looks weird when they walk, but that’s how they do it. I never really found out why they have such a weird gait. I wouldn’t expect there’s much advantage to it, seeing as they’re so tall and generally unbalanced, I’d expect that they’d use the intrinsically more stable diagonal gait. I have some research to do.

“For many years the scientific and educational community has wondered and worried about the possibility that semi-sane scholar pretenders would find the means to put out a series of reference books aimed at children but filled with ludicrous misinformation.” 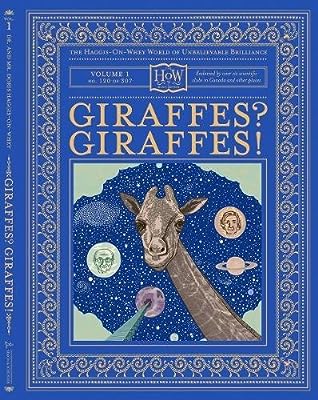 For many years the scientific and educational communities have wondered and worried about the possibility that semi-sane scholar-pretenders would find the means to publish a series of reference books ...

Oh, I know that one. It’s the ‘tall goat’ from Goat Simulator.

The gait is called pace. Elephants do it, and camels and bears. In Icelandic Horses it is a feature called skeið, gliding. In other animals it happens randomly like sinister-handedness. I knew a soldier once that couldn’t march because of pacing.