I’ve been waiting for these fuckers to go on sale. I think I’ve burned through 10 lightning cables since I was issued an iPhone for work about a year ago. I gave up on any of the name brand cables you can grab at retail. 20+ bucks every month or so. Starting buying the 4 dollar drug store knock off ones. Last longer and cost less.

Just couldn’t bring myself to toss more money at over priced cables. Figured when aukey or anker cables went on sale I’d see if they can outlast the two month life span of my noname cheapos.

They’re derivative. You get a better value with the original Mordenkainen’s Lightning cables, and you can buy a few Magic Missiles with the change.

I’ve been using a trio of these to charge my gear on a near-daily basis; haven’t had any problems with them yet. if you have your stuff in an OtterBox Defender, the cables will fit just fine in the gap the port cover leaves. Thought I’d mention that.

I’ve switched to magnetic cables, came with little plugs for my iPhone, Motorola and Nexus 5. Connectors on devices are kept clean and free from wear, cable end has small LED in it turns red when charging, blue when not… really are the best.

Only down side is rubber flap on my iPad Otter Box puts enough pressure to sometimes break the magnetic lock.

Bonus is I need fewer USB chargers … one cable at my desk can handle every device I own. Love it.

note - can they move data like a USB cable? I’m unsure, never tested that.

A quick search turned this up 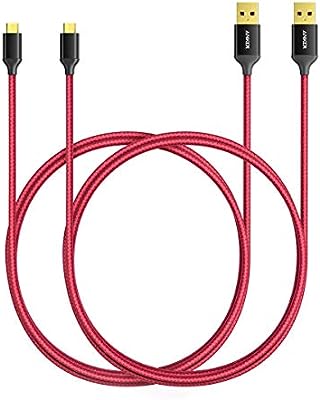 I’m an Android user and I’ve had similar issues with both name-brand and no-name microUSB cables crapping out on me way too soon. I picked up a couple of Anker cables a couple of months ago, and they’re working well. (Two months is a little early for me to give a glowing recommendation… but so far so good.

Edited to add: …and Otterboxes rule. My phone has survived years of drops, bounces, and even getting jammed between a car door and its frame, thanks to a Defender case. I will gladly and wholeheartedly recommend Otter products. They may be plain, but they work.

I went with the slightly more expensive powerline II’s myself, which have a lifetime warranty. Given that I’ll probably be using these for years (going by how long the prior ipod connector was around for), and how horrible I am on cables, I figured I’d spend the extra buck or so and get a perpetual warranty.

I don’t think I’ve ever had a micro USB out and out crap out on me.

I had one that got bent, so it wouldn’t fit the port. But presumably it still functioned. I’ve had a couple where the little clips that hold it tight to the port went wonky so the connection got a bit unreliable.

But I’ve got seemingly dozens of the things in various states of disrepair that work fine. A bunch of them have worn, frayed or totally roached insulation right below the plug. Seemingly the major failure point on the lightning cables. And work perfectly. I’ve even used the ones with broken wires in a pinch.

I don’t think I’ve ever had a micro USB out and out crap out on me.

The connectors can flake out when jammed into some devices in the Android world. Both of my Nexus tablets destroy cheap USB cables. It’s probably a device-side problem, but replacing the OEM cables with very study ones fixes it. I’m happy with Syncwire cables, which are cheap and come with a lifetime (?!?) warrantee.

Please tell me where you buy your micro USB cables and outlet adapters. Mine fail ALL. THE. TIME!!!

The few I’ve had fail came with devices. But then so did many of the ones that just keep going. And I did have a Samsung phone years ago that seemed to mess with connectors.

Please tell me where you buy your micro USB

Mostly just come with stuff. My most durable ones (and all my USB cs) are aukey though.

Part of it might be that I have so many of the damn things, seem to come with everything. That none of the jankey ones get a ton of use.

note - can they move data like a USB cable? I’m unsure, never tested that.

The Anker cables? yes, they are full USB cables and not just charge cables.

…and Otterboxes rule. My phone has survived years of drops, bounces, and even getting jammed between a car door and its frame, thanks to a Defender case.

I’m on my second defender case for my iPhone 5s- I broke the larger tabs on the first one I bought. the 5s might have some light scuffs on it, and there’s definitely schmutz around the opening for the camera and speaker, but both are otherwise pristine. And I am… not gentle with my equipment. (which is why they both went in cases when they were bought.

They are susceptible to certain kinds of wear - people using the device plugged in tend to bend them in ways they don’t like. Mine also last forever, but the wife and daughters cables live for a couple of months.

That appears to be bending them at all. Its a bit like clock work. After a couple months of use. The insulation just behind the lighting plug starts to separate and bubble out or wrinkle. Not long after that the cord stops reading as “certified”. Though it still seems perfectly functional. Apple’s certification just won’t let it charge the device. Then it starts to intermittently connect and disconnect a couple times a second, not charging but sending off an annoying little chime. They rapidly become useless after that. Flat cables. Round. Braided, Apple brand. They all seem to do it.

It only seems to happen at the lightning side of the cable, never the usb. There’s some sort of design flaw there. That point, where cable meets plug. Is the highest stress part of a cable. But I’ve never seen anything else fail quite like that. Insulation commonly splits there, separating around the internal wires. But provided those wires are intact, the cord works fine. I’ve seen cables snap there of course. Or something separate internally killing the cord. And I’ve dealt with a lot of different sorts of cables.

Either a wire is separating internally, despite the cable being otherwise intact. And for not much reason. Or something technically not necessary is way too fragile in there. There’s a really fast and specific way these things go bad.

I’ve also had a couple of the little tabs for the lighting port work themselves loose and just snap off just from plugging and unplugging them. Which is GREAT. Cause you need a pair of needle nose pliers to get them out the phone.