Just had a look on Apple Maps, and the NS Dokumentationszentrum is listed as a history museum, not a public toilet. It does have a wheelchair accessible public toilet available inside, so searching for the nearest loo will point you to it. Perhaps that is where Mike Shaughnessy got the impression?

Editing to add that if you are in Munich, go and see it. Entry is free, and it is well made.

(Well, I guess technically heroin does.)

Oooh. Do Pinterest next. My wife does a Youtube history channel, and between the civil war battles, and WWII pictures, she is constantly swamped by nazi and alt right pro confederacy shit on her Pinterest. Just because of the historical photos. Hell, just look up any norse runes, or Thor related norse mythology, and you will get a smattering of nazi women’s tattoos, and pro white supremacy image boards.

Thank you for spreading awareness of this.

Sadly, I’ve made several attempts to reach out to Google and Apple about mapping memorial sites and have been turned away at each attempt.

Thanks for trying, but they’re not going to listen to you. I’d suggest that you contact the ADL and/or the SPLC with this article. Both are effective and (especially now) vital orgs that can get these companies to change their policies to prevent this.

Apple Maps seems to rank the popularity of locations based on TripAdvisor ratings, which seems also fraught with problems given the massive fraud on that site.

I posted this before, but it still seems relevant.

The Führerbunker also has 5-star ratings such as this:

So if Google does nothing, we still can take action to reclaim these monuments.

For an art project I once reviewed all reviews of all 184 tram stops in Leipzig, Germany. Due to their vagueness they stand in as geographic placeholders for the area, the neighborhood – and they attract lots of racist or classist “reviews”. What a shitty, hidden world.

What a shitty, hidden world.

True. But the world is full of shitty humans. Make it harder to be shitty on Google Maps or Apple Maps, and they’ll migrate elsewhere. It’s hard to know what to do, since this isn’t a function of technology, but of humanity.

Also, not-actually-Nazi people, especially Americans for some reason, could maybe - perhaps - just resist the apparently compulsive urge to quip and make puns sometimes. Nazis gonna Nazi, but it seems to be part of some internet rulebook that anything that has something to do with Germany/the Holocaust/anything in that ballpark needs to be accompanied by glib “They did NAZI this coming!” level puns and quips about trains and camping and whatnot.

(To be fair it’s not just Nazis… at a certain frugal community I’m part of I stopped disclosing that I’m from Eastern Europe because I keep getting “funny” quips about queuing for food, etc. Even slightly absurd crimes happening in a place that is not the US regularly get “this is something that would happen in /insert US city or state/” quips. And so on.)

Hmm, I didn’t even mention I’d like to make it harder… but I don’t buy the “they’ll migrate elsewhere” argument, as if we’d need these comments as lightning rods / tar pits.
They didn’t migrate here from somewhere else; new technology sometimes opens new avenues to be shitty, it invents totally new ways to be shitty (see: mass surveillance).
EDIT: I’m not talking about censorship, I’m talking about the responsibility of inventors (tech companies and such).

Passive-aggressive cowards. they fantasize about being goose-stepping jackboots, but all they ever do is conspire with their friends to vandalize websites, harass strangers, and shit-talk.

Don’t underestimate the risk they present.

My personal experience is that they are more than willing to be violent to those they view as subhuman. My PTSD is a constant reminder.

You do realize that there have been quite a few terrorist attacks, murders of people of color, Jews, and Muslims, attacks on Jewish and Muslim institutions, and groups like the proud boys are actually attacking people right now? This is not just online and frankly it has been an ongoing problem in the real world long before now.

My personal experience is that they are more than willing to be violent to those they view as subhuman. My PTSD is a constant reminder.

I mean someone here has had direct experience with these assholes.

My personal experience is that they are more than willing to be violent to those they view as subhuman.

People who commit violence belong in prison. No matter their motivations. I realize this doesn’t seem to work in the real world. But it’s how it is supposed to work.

I tend to believe that we can enforce behavior but we should be very careful on enforcing speech, and especially careful on assuming intentions without facts.

My PTSD is a constant reminder.

I’m sorry to hear this. For what it’s worth, I’ve been beaten by people for a wide range of “reasons”. None of them valid. There are lots of people out there that have corrupt views incompatible with a peaceful society. We’re supposed to remove them from society, as in put them in prison. In practice we’ve been giving them jobs as cops, or other positions of authority. And ignoring or excusing their abhorrent behavior. 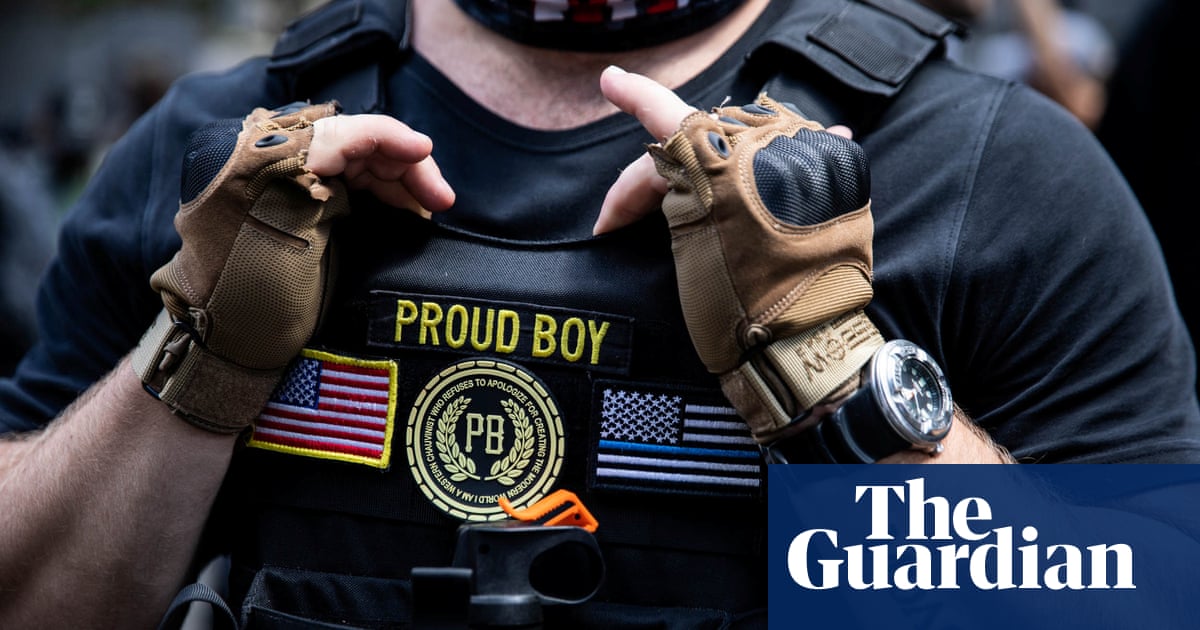 Law enforcement have shown concerns about the group’s menace to minority groups and police officers, and its conspiracy theories

Ignoring their ideology and pretending they’re not a real problem has not worked. They are on the verge of a coup here. Open your eyes.