Gun manufacturer pitches the "JR-15", a rifle for kids styled on the AR-15

Originally published at: Gun manufacturer pitches the "JR-15", a rifle for kids styled on the AR-15 | Boing Boing

They need an updated version of The Gashlycrumb Tinies, where they all die of gun violence.

Sure it’s single fire. Unless you buy the bump stock kit for your kiddo.

Oh boy, another collectible for the ammosexuals to drool over (AR-15s are already marketed as collectibles, by the way).

Plus it’s never too early to inculcate toxic masculinity in kids. 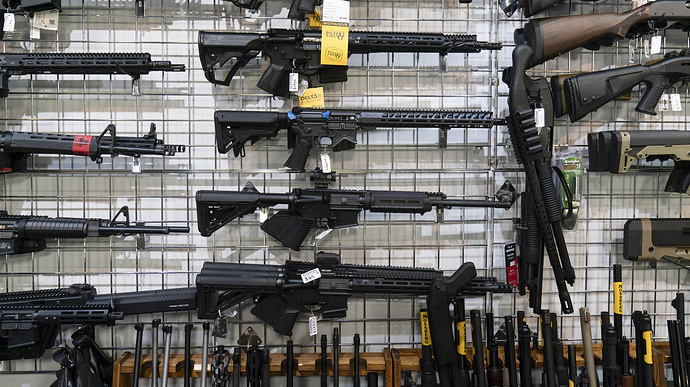 Gun manufacturers have taken in more than $1 billion from selling the weapons over the past decade, at times marketing them as a way for young men to prove their masculinity.

Why does Eric want to sissify America’s children? You don’t see other people’s child soldiers being whiny little babies about what their Kalashnikovs weight, at least not after some punishment. Does he think the great children of the greatest nation are little weaklings who need to be coddled with .22s?

Why don’t they listen to the ancient warning? 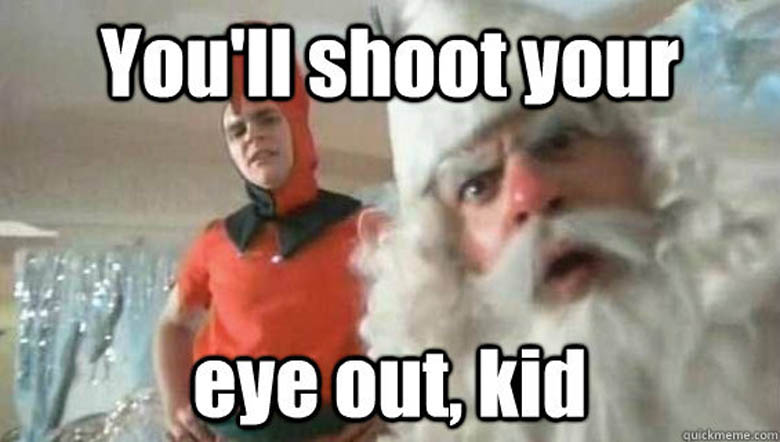 A functional kiddie version of a military weapon platform, to be even more precise.

Speaking of that kind of precision, I’m sure the ammosexual technical gun-wanking in this topic will be especially ridiculous.

Oh, sure. I’m certain THAT won’t encourage children to pick up any gun they see and play with it. /s

A functional kiddie version of a military weapon platform, to be even more precise.

When the forever war was in Indochina, they* only prepped the veterans of future wars with toy replicas. 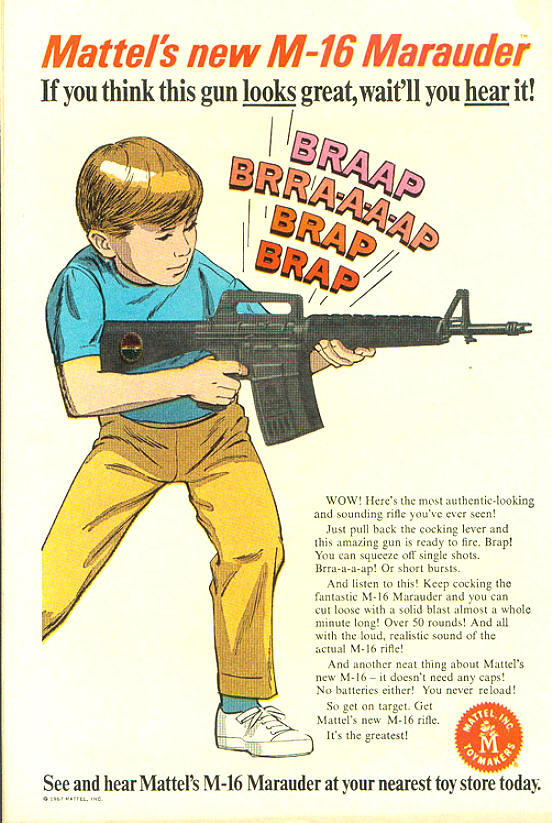 Now that the forever war is in a lull, they want live-fire training. Hm.

* there is no they. If there really was an Illuminati they, it wouldn’t be half this shitshow. fnord.

I’ll see your “A Christmas Story” 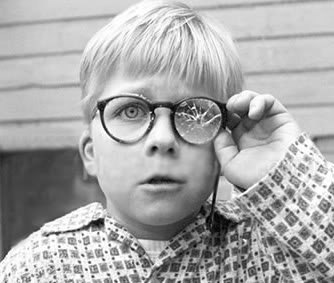 And raise you a “Battleship Potemkin”… 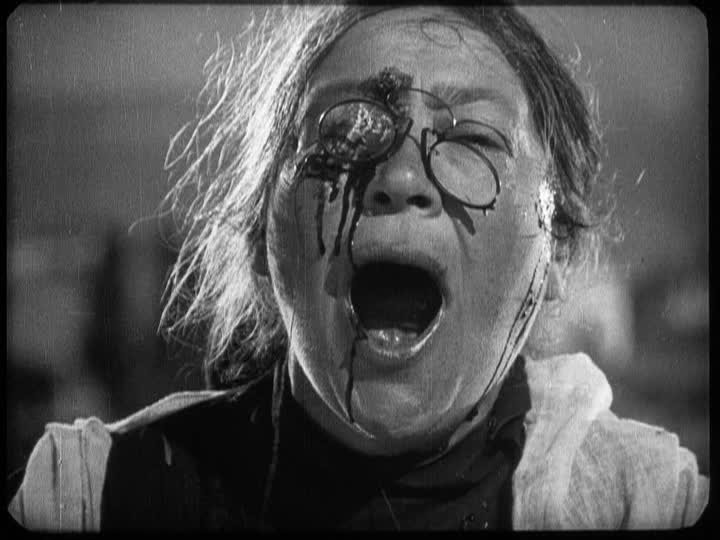 There is no disputing the fact that handguns are responsible for the vast majority of the day-to-day carnage we have here in the U.S.

But if someone is hellbent on mass murder, they can do it just as easily with a semi-automatic handgun

Kinda yes, kinda no. Handguns, as mentioned, are effective for killing, and have figured in countless mass shootings, with the 2007 VA Tech shooting being one of the higher-profile tragedies.

But rifles allow attacks on large crowds from MUCH further away; and just as importantly, the wounds they produce are MUCH less likely to be survivable. The energy of the projectile is just on another scale, and the effect on the human body shows this. This is an excerpt from an Atlantic article written by a doctor who treated victims from Marjory Stoneman Douglas (The AR-15 Is Different: What I Learned Treating Parkland Victims - The Atlantic): 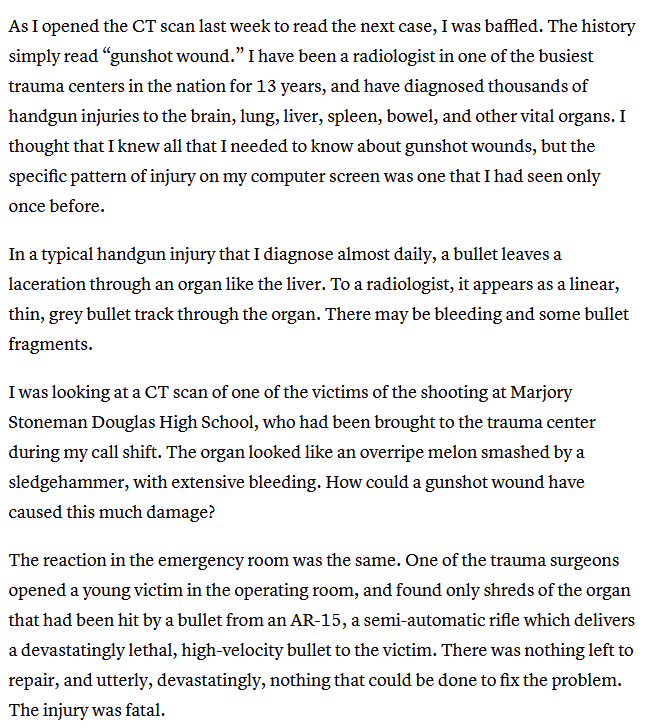 And this is an excerpt from an NPR article, one where the shaken coroner would say very little about what he saw; but the article goes on to describe in general what the weapon is capable of (Uvalde coroner is haunted by identifying bodies of children and an old friend : NPR):

The bottom line is that yes, both clearly can kill; but ARs and their ilk are considerably more deadly. We desperately need to get a handle on both; but equating them s a mistake.

You can’t parody an industry already parodying itself.

A mom & pop machine shop making and selling these things … I wonder if this company is large enough to handle the weight of legal responsibilities regarding selling weapons.

If they’re not I’m sure they’ll receive sufficient support from the NRA, GoFundMe pages started by ammosexuals, and the Republican party to drag the court case on for years (if not decades) if they can’t kill the case outright.

I’m also skeptical about the “child safe” safety. A sufficiently motivated child can get through or past a lot of preventative measures targeted at kids. I wasn’t able to tell from the picture what that entails, but is it proof against two or three kids working together with access to tools that could let them bring their full body weight to bear (crowbar, wrenches, metal pole, etc.)?

I could have sworn there was a post about this back when it was first introduced a year or two ago. I couldn’t find it.

Ah, you just can’t win. Take safety and training seriously, and come up with what is arguably the safest starter rifle made (because it is the only one I am aware off that has the ability to internally lock it out when not in supervised use and is a single shot .22lr) and it’s still pearl clutching time.

I started with a Remington bolt action with a 6 shot magazine at 5 or 6, and soon after the ubiquitous Ruger 10/22 semi-auto with a 10 shot magazine. This rifle has more safety features than either of them. Being a smaller size, the handling is safer as well as it is less awkward to hold, though they do make youth sized models of other firearms.

If you’re in the “guns are bad” camp, then alright, here is another one for the list.

If you’re in the “some guns are bad” camp, this guns only looks like an AR-15, it has none of the same capabilities. (Other than to shoot a projectile, but if that your issue, then see above, I guess.)

Anyone looking to teach their kids marksmanship at a young age can do so safely with the proper supervision and precautions. This rifle has the features to make it a good starting rifle, but if you prefer, there are other good rifles like the Crickett single shot bolt action.

Yeah… how about not marketing guns to kids. Full fucking stop. I don’t know why that is a controversial point, when a 6 year old child JUST FUCKING SHOT A TEACHER!

If you’re in the “guns are bad” camp

That is awfully fucking reductive of the very diverse set of view points that are actually expressed on the issue of guns here. I don’t think that being angry about kids being marketed guns is “pearl clutching” so much as evidence of a very dehumanizing gun culture that seeks to make this country a war zone just to line their god damn pockets.

How about not teaching children to use guns? Teach them that guns are something only for adults. We don’t need and should not want a gun specifically made for children so young they can’t use a regular one because they are fucking children who shouldn’t be handling guns. Most adults are not responsible enough to own a gun. Children are definitely not.
JFC. We have age restrictions on movies but we can’t have any on guns?
I get that you like guns. It’s your hobby. You are never going to understand or admit exactly how harmful that hobby is. But can’t you admit that maybe, just maybe, this is not a hobby suitable for CHILDREN.

They need an updated version of The Gashlycrumb Tinies…

It’s been done, and it’s as heartbreaking as you might expect. 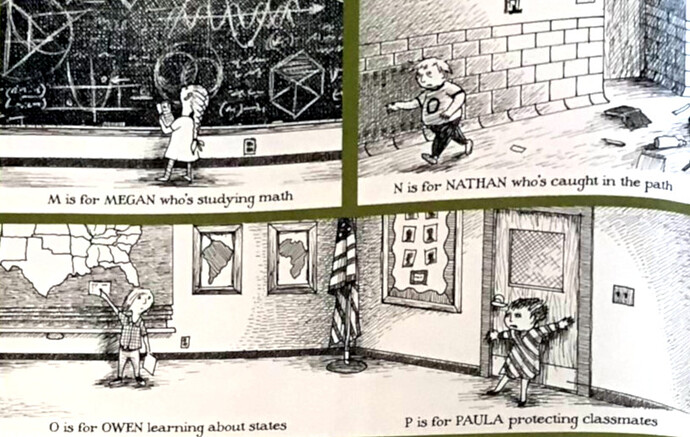 Edward Gorey’s “Gashlycrumb Tinies” is a much-beloved, macabre illustrated children’s book that is a favorite of remixers of all kinds; but Mad Magazine’s Ghastlygun T…

Full version. You have been warned.