Nice to see someone who’s brought joy and laughter into the world reaching this milestone in reasonably good shape. Happy birthday, and thanks for all the fold-ins, inventions, and snappy answers.

Life would never ever be the same without Snappy Answers to Stupid Questions.

From a few years ago… 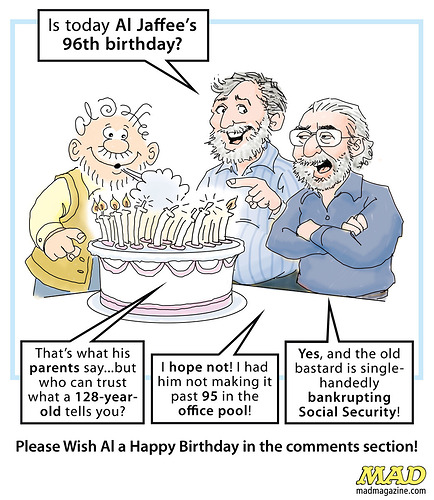 Let others make piles of money, but there’s a great deal to be said for making a decent living doing something you love that brightens the lives of countless others. Said “others” includes me, pushing 70.

Nice! Check out that hair!

My dad introduced me to Mad as soon as I could read. It definitely influenced me, hopefully for the better. I always loved the fold-ins and, when I got older, Snappy Answers. Happy 100, Al!

My dad introduced me to Mad as soon as I could read.

Lucky you, I had to very much hide mine!

Yep, Al Jaffee folded, rather than going all in. 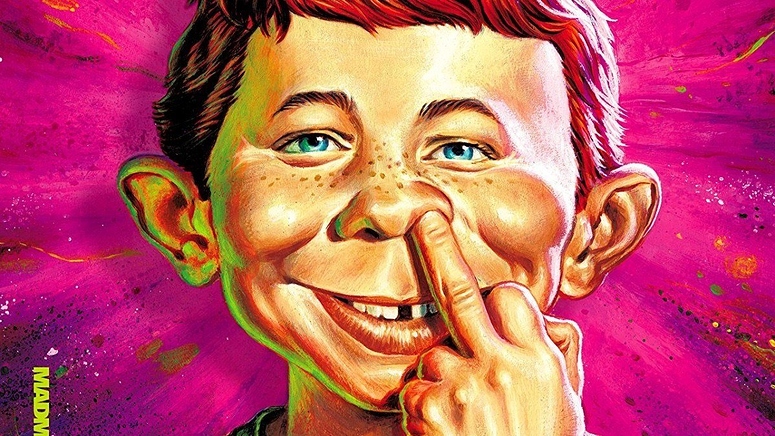 His early attempts at the Fold-Ins were not well received. It wasn’t successful until he went with a vertical rather than horizontal fold.

Thanks very much Al!
One of the highlights of visits to my grandma’s house when I was a kid was sneaking quietly up to the attic and looking through the pile of old Mad Magazines that were stashed up there. The oldest ones were thin comic books.
If I got caught, I had to go play outside.

Mad brought me so much happiness as a kid. It’s just amazing to think that this man, whose cartoons I laughed at in 1959, is alive and enjoying life.

Yeah, he looks amazing. I wouldn’t have made the joke if he didn’t.

The reference to “multiblade razor” seriously undersells the drawing of someone shaving with the “Track LXXVI” (this was in the days when the ‘Track II’ was new) which featured a link-belt of 76 blades with a handle on each end that wraps around your face so you only need a couple of strokes to shave. This in a “MAD looks at shaving of the future” piece that also included laser shaving (which also happened, though without the integrated freon canister) and a bunch of other stuff that seared itself into my 10-year-old brain and bounced around in there for forty years with no outlet UNTIL TODAY. Now maybe I can reclaim those neurons for something else.

Or maybe I’ll keep them. Thanks Al!

I began reading Mad Magazine when I was in the sixth grade. The news dealer asked me how old I was. I told him he should be glad I can read! He laughed and sold me the magazine…for a quarter, I think. Don Martin was my favorite cartoonist.