Help me remember an issue of Heavy Metal

My childhood was seriously traumatized by a particular issue of Heavy Metal magazine. I remember it calling itself “the violence issue”. And boy oooo boy was this issue violent. I lived in Georgia at the time, we had it at school somehow and me and my goofball friends would pass it around and read it. I think at one point the teachers confiscated it because it was so freaky. I don’t blame them!

This would have been … around 1981-ish? I’m fuzzy on the exact time frame.

I browsed a bunch of Heavy Metal magazine covers and I can’t find it in that time range, unfortunately:

I have a torrent of a bunch of issues (all the issues?) and I’ll keep looking. I would have sworn it was Heavy Metal, I have no idea how 1981 me would obtain any kind of other magazine that Comix Violent around that time, if any such thing even existed.

Does anyone else remember such an issue of Heavy Metal? The Violence Issue?

No idea, but this sounds like something that should end up at archive.org!

I think I have this one. But I am going out in a few minutes to do something time-sensitive. I will check later this morning.

I think I have this one. But I am going out in a few minutes to do something time-sensitive. I will check later this morning.

If you don’t get an answer PM me in two weeks and I’ll help you out. Right now I’m away from that data.

Any luck on this? I’m encouraged that at least one person seems to remember it!

No idea, but this sounds like something that should end up at archive.org!

There are a bunch of issues up there already.

I would have sworn it was Heavy Metal

OMGGG that might be it! You are genius @Beanolini! That looks very familiar! 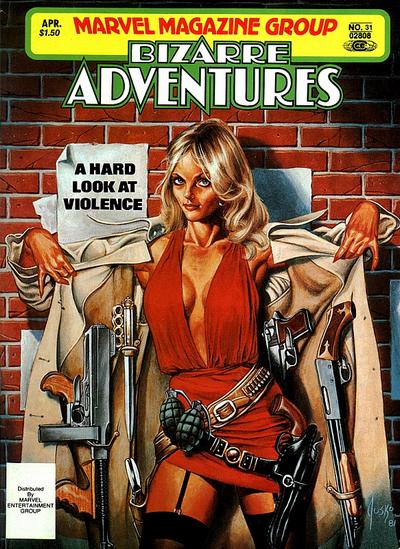 Marvel Preview is a black-and-white comics magazine published by Magazine Management for 14 issues and the affiliated Marvel Comics Group for 10 issues. The final issue additionally carried the imprint Marvel Magazines Group. An umbrella title that showcased a different heroic-adventure, science-fiction, or sword-and-sorcery character in virtually every issue. The title introduced the Marvel Comics characters Dominic Fortune in issue #2, Star-Lord in #4, and Rocket Raccoon in #7. The vigilante ...

So what do you remember from the contents that left such a permanent mark? That wiki article is an empty husk, sadly.

I gotta get it now! Working on it.

That all depends on what you mean by ‘person’, and ‘remember’

(I kid because I love)

I’m trying to obtain copies of this now. It’s really obscure, so hard to get…

Well, I have it. And it is everything I remember as an impressionable 11 year old.

Special thanks to @beanolini. You should PM me!

This topic was automatically closed after 206 days. New replies are no longer allowed.