This is such a strange and uncharacteristic response that it makes me wonder if Einstein hadn’t meant to write “now” instead of “not.” Could it be a typo?

I read it more as Einstein saying that what these other people think they have seen is not really his concern or worth his time, as opposed to his not being curious from a scientific viewpoint.

One of our English-speaking German friends here might have some insights into the phrasing as well.

Another take on this: “I wrote the theory of relativity, but you want to know if I believe aliens are visiting us? Get bent, I’ve got better things to do with my time.”

Another take on this: “I wrote the theory of relativity, but you want to know if I believe aliens are visiting us? Get bent, I’ve got better things to do with my time.”

That’s exactly how I read it, too. Also, he underlined the word something, which I visualize as air quotes. Two sentences tells me he doesn’t think it merits much attention.

The twist on it that I get is a sense that a one of the primary qualifications to be Albert Einstein is being uncommonly open minded, to possibilities that very few others would ever consider or imagine (hence the acknowledgement of the reality of the experiences) … and at the same time judiciously knowing just how much mental energy to direct given the available array of facts in this particular report.

“Dear Sir,” Einstein wrote. “Those people have seen something. What it is I do not know and am not curious to know. Sincerely yours, Albert Einstein.”

The aliens got to him. We were too late.

“People saw something. I don’t know what it was, and I don’t care.”

One could continue on through all possible iterations of translations, but it may – in all – come down to this one universal declaration: Never disturb me during my lunchhour.

Spooky saucer at a distance

You are all missing the important bit—the “encl.” at the end of the letter. Obviously Einstein wanted to preserve deniability, so he enclosed all that he knew about UFOs in a separate document, now mysteriously missing.

Owe me a coke! I was drafting in another window:

One wonders what Einstein enclosed. 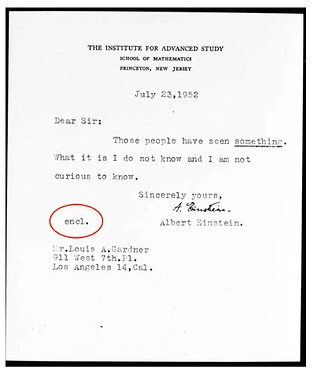 There’s a picture at the Mental Floss link of Rev. Gardner holding this cover note that we see in the BB post, plus a full-size, tri-folded letter. I assume that larger piece of paper is “the letter”. What was on it??

Owe me a coke! I was drafting in another window:

That’s not how this works. You can produce all the time-stamped and notarized drafts you want, the fact remains that I published first.

ETA: Good catch on the photo of Rev. Gardner, though.

Aw, it was so close. What I get for fussing around with screen shots

Here’s a [unidentified drink of your desire] for you