Originally published at: Here's what stripped Americans of their last state without a daytime numerical speed limit  | Boing Boing

See also Texas and other western states where counties with a few hundred residents are larger than Massachusetts.

That said, to reasonably allow triple-digit driving in the US, we would at least have to include German-style vehicle inspections to make sure each vehicle was road-worthy at those speeds. Most aren’t, for sustained driving. Heck, even vehicles that are nominally capable of it are often fitted with tires that aren’t, or aren’t in good enough condition. 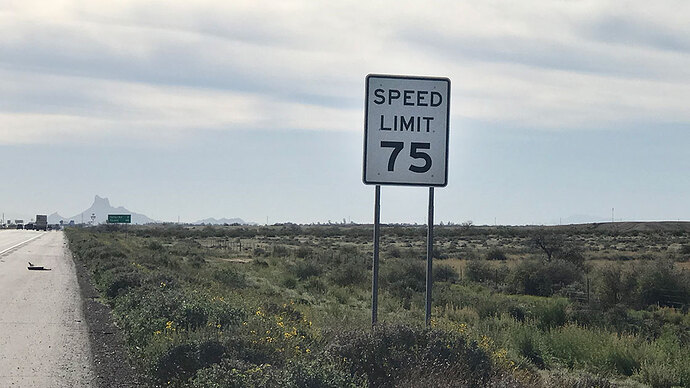 Speed limit increases are tied to 37,000 deaths over 25 years

but driving in Montana…

65 mph is the same speed regardless of state boundaries and plenty of states are big and sparsely populated. People die at excess speed. Innocents, including children are killed at higher rates as speed increases. It’s not about taking personal risks, it’s about killing other people because one can’t be bothered to comply.

Grow up and set your cruise control.

Boy, the cops must have loved that - no matter what your speed, they could issue a ticket! I know cops love to harass people for “going too slow” (when they haven’t actually done anything wrong), but it only really works at speeds significantly below the speed limit - a complete lack of a speed limit really opens up the possibilities.

when they haven’t actually done anything wrong

Not exactly. In particular, 48 out of 50 states have laws that going too slow in the fast or passing lane of a multi lane road is illegal. Wording varies, but generally, being in the fast lane while impeding faster traffic or failing to yield the left lane to faster traffic is illegal. This law is separate from speed enforcement, so it doesn’t matter if the driver going slow is going the speed limit. Heck, in a lot of states, going 60 mph in a 55 mph zone while impeding faster traffic is a double violation. And, let’s face it, it’s also stupid, dangerous, and rude.

It’s a pretty well known phenomenon of people of color driving in certain areas to be pulled over by the cops for “impeding traffic” even when they were literally the only other people on the road. It becomes an excuse to pull someone over when they haven’t broken any traffic laws and were traveling at less than the speed limit.

That doesn’t make the law wrong, it means the enforcement is wrong.

I mean, even if it wasn’t the law, it just makes sense. The whole fucking point of a multilane road is to accommodate different speed vehicles and drivers. Blocking the fast lane completely defeats that purpose.

When laws are vague enough that they can be used as a tool of arbitrary abuse, that’s also a problem with the law.

The laws of that kind I have read aren’t vague. Sounds like you’ve got an agenda against these laws, and you’re using examples of racist enforcement to justify it, when they could have used any moving violation. That’s not cool.

Well, all I know is, it gets used abusively a lot. As in, I know of people who get stopped, over and over, on that pretext, and given tickets. So clearly there’s issues - I’m not inventing them because I hate the laws or some ridiculous shit like that.

My apologies, then. It seems like the ones that I hear most about are failing to use a turn signal or being pulled over for some random bit of minor damage - tail light not working, a tiny bit of exposed tire along the side of the vehicle (while lifted pickup trucks with no mud flaps roar by).

As has been said, if police want to pull you over for something, they only have to follow you for a few minutes before you will technically screw up something.

no matter what your speed, they could issue a ticket!

Especially when the license plate is out of state.

As has been said, if police want to pull you over for something, they only have to follow you for a few minutes before you will technically screw up something.

Which makes misuse of this particular law especially egregious - either that nugget of wisdom isn’t actually true, or cops can’t even be bothered to wait that long when they know they have this other, more reliable tool to harass people.

Whatever. People going too damn slow on the highway - we’re talking 10-15 mph below the speed limit for no damn reason, during rush hour - is common enough here that I’ve seen state troopers just put their lights on for half a mile to clear out the left lane and getting things flowing again.