Twilight Sparkle! My how you have grown!

Does that mean at least one person in Vancouver is already walking around with this art tattooed on their back or arm?

Does that mean at least one person in Vancouver is already walking around with this art tattooed on their back or arm?

Have never quite understood why anyone would want to be indelibly marked with something that is essentially a bar-code for police.

Damn, I was looking for a place that did sharks with unicorns for legs.

Because we generally don’t think there’s a chance in hell that the police would care about the very legal things we do. Also, none of my tattoos are visible without you getting me partially naked.

I don’t understand the interest in tattoos, just not my thing; but judging an activity by its police visibility is a pretty grim standard, especially given the number of arguably noble and/or definitely harmless things for which you can attract police attention, or worse, in various jurisdictions.

Avoiding lurid tattoos is good advice if you expect to need to clean up well for a jury at some point; but unless crime is your career living your life based on what the cops will think is a rather ghastly prospect.

Or just keep them above the wrists and below the neck.

Facial metalwork is also removable in cases of emergency normality and piercings anywhere else aren’t noticeable. That staid-looking blue-rinse on the train could well be rocking some amazing artwork and eye-watering personal accessories. You never know…

You know what else I heard is a barcode for police these days? Your face. I just wish the police realised that they aren’t really colour coded!

Interestingly enough, so is your fingerprint. And I don’t mean from touching anything. fingerprint from photo. So, there’s that too. 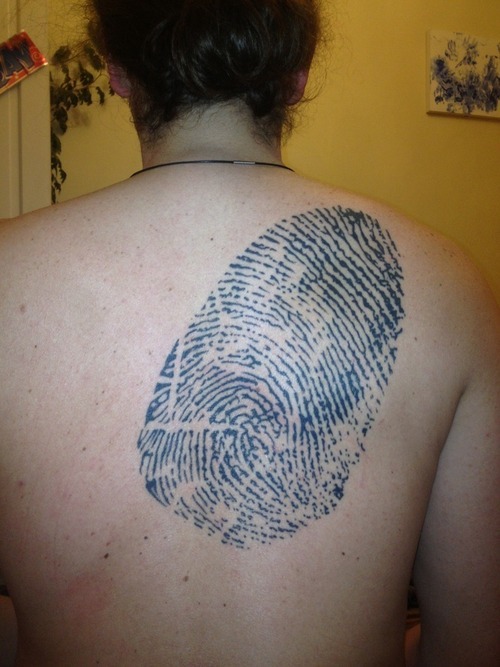 Yeah; I’m not that cool with the cops having my prints but even less keen on them being in the possession of some 14 year old German nerd with a persecution complex.