Meh, it’s not the legslator’s place to make that call, that is what the courts are there to decide. It is pretty damning, but it’s part of the way checks and balances are supposed to work.

Why on Earth would they think that about dominionists? Somebody hasn’t been reading the Bible…

BTW, this is not just about this particular bill. 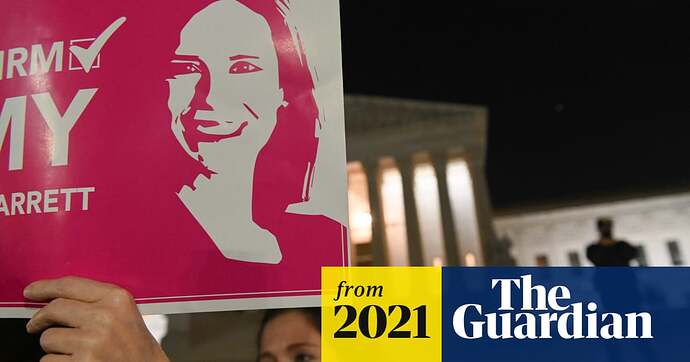 Legislation that would erode LGBTQ and reproductive rights expected to be introduced in states across America, experts warn

True, but I was talking about the larger implications of overturning RvW. It rests of the idea of the right to privacy. Presumably, that’s not just a “women’s” issue, but an issue that touches all our lives.

Oh yes. Once they’ve banned abortion, they’ll have to have doctors report all pregnancies all female status, and track “flight risks” with ankle monitors or something.

With the volley of laws in different states against RvW, most of these are designed to fail. Their purpose is to get particular turns of phrase in the judgements against them, that can be used as cracks for the next attempt to chip away at. The conservative justices don’t have to overturn RvW, just add some cracks.

This tactic of “success without victory” was done in the fight against employee rights. (With Justice Alito as the crack-monger.) 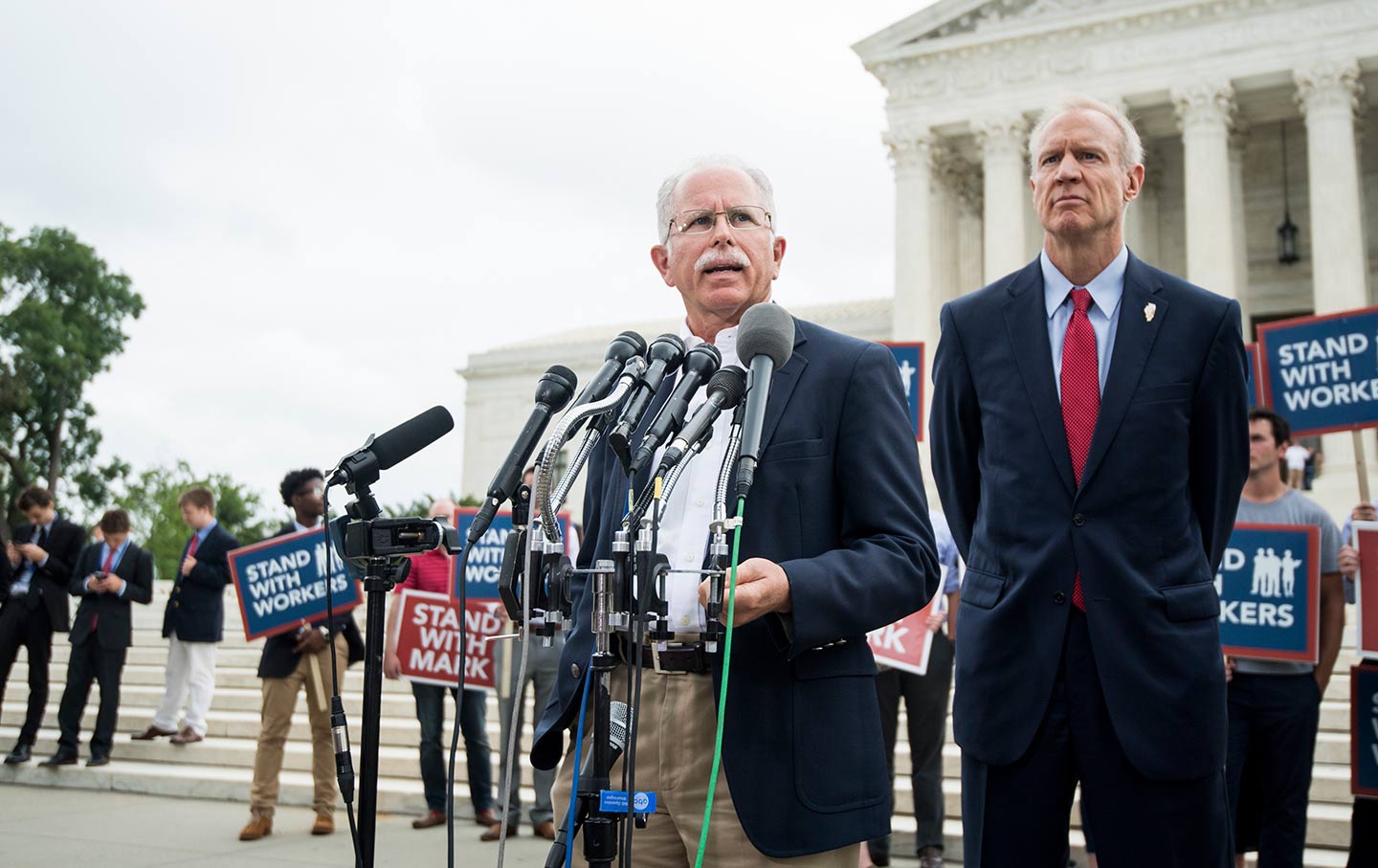 For 60 Years, This Powerful Conservative Group Has Worked to Crush Labor

Now the Janus decision has helped push the National Right to Work Committee and its sister organizations closer to that goal.

Meh, it’s not the legslator’s place to make that call

It’s literally in his oath of office to “defend and uphold the Constitution of the United States.”

It’s some mealy mouth “trying to have it both ways” bullshit in a failed attempt to sound reasonable. “Oh, abortion, bad! Unless some horrible trauma has been inflicted, then it’s ok!”

These people are in the minority. There are a lot of them, but they are still the minority. They understand that the majority of people don’t want to completely ban abortion, and that eliminating exceptions for rape, incest, and to save the mother’s life will actually motivate politically un-engaged people to actively oppose them. But their end goal is a Gilead type state where only wealthy white evangelical men have any rights. They’re not even subtle about it.

It may not seem like it, but they are losing. And this makes them even more dangerous, as they see this as their last-ditch attempt to take control and create their version of “Utopia.” This is why they stormed the Capitol. This is why they brazenly packed the courts, including supreme court, the past 4 years. This is why they are destroying the voting rights act and passing a raft of voter suppression laws. These are the actions of a group that know this is their last chance to hang onto power and impose their will on the unwilling.

They are losing, but they haven’t yet lost. We ignore them at our very real peril.

Also, I don’t mean you (@ficuswhisperer) as the focus of this rant. My apologies in advance for choosing your post as the stepping off point for my own venting.

So?
The courts are the arbiters of the law, many lawmakers are not legally knowledgable enough to understand if the laws they pass are or are not unconstitutional, and even though he thinks it is, only the courts can actually declare it so.

The complex role of the Supreme Court in this system derives from its authority to invalidate legislation or executive actions which, in the Court’s considered judgment, conflict with the Constitution. This power of “judicial review” has given the Court a crucial responsibility in assuring individual rights, as well as in maintaining a “living Constitution” whose broad provisions are continually applied to complicated new situations.

He’s not a lawmaker, he’s the governor, and it damn well is his responsibility to veto any law that he knows is unconstitutional. Which he stated outright, violating his oath of office.

Same as every person sworn into the military. The expectation is that they uphold the Constitution to the best of their knowledge and ability. In a court martial, it wouldn’t go well for an army officer to say that they knew it was unconstitutional to force American civilians to house their troops at gunpoint, but, hey it was late at night and they couldn’t find a judge to run that opinion by so why not?

I imagine birth control is next on the chopping block

You are familiar with the whole “personhood” movement, right? If a fertilized egg is granted “personhood,” most forms of female-controlled birth control go right out the window. I see this as their ultimate goal.

Texas has been run by these wing-nuts for decades; they give no fucks about who they hurt, as long as they are running things, and incompetence is almost indistinguishable from malevolence.

Why Texas Is the Most Dangerous U.S. State to Have a Baby (governing.com)

Maternal mortality rates have been increasing throughout the nation. But if Texas was a country, it would have the highest in the developed world.

black women were three times more likely to die from complications of childbirth than white or Hispanic women.

But at least they have their FREE-DUMS

It’s his opinion that it’s unconstitutional, he cannot declare it to be so, that’s the judicial branch’s prerogative…

For a start, there are no penalties (for all intents and purposes) for passing or signing into law unconstitutional legislation, second, there’s a big difference between doing something that is explicitly outlined as as unconstitutional in the constitution, and passing a law.

That is part of the assessment that he is supposed to consider when signing a law. It is why the executive is given the responsibility to sign or veto legislation.

As for penalties, violations of an oath of office are absolutely grounds for removal through whatever process is applicable for that office.

Again, if he had said, “I don’t know if this is constitutional or not” then he would be in the clear. But by positivity stating that it was unconstitutional, he is unquestionably violating his oath.

Yeah, and all the congressmen who voted for the MCA while at the same time stating publicly that it was unconstitutional also did so, and faced no consequences. There’s a lot of legal opinions out there (like: https://core.ac.uk/download/pdf/147631222.pdf) about the repercussions of this “logrolling” but it has long passed from the realms of something actionable into the land of generic political hypocrisy.

Whether it is practical to hold him accountable for it is another question entirely from whether there is wrongdoing. That doesn’t mean we should be complacent about calling it out or insisting that action be taken.

When we stop calling for officials to be held accountable, that’s when we’ve truly lost ourselves.

!!! Literally someone cares, or I wouldn’t be posting about it. And it’s a common issue among libertarian sorts so I know there’s at least a dozen other people

. Personally I’m not sure how workable it is but I’m just sick of seeing politicians play to the lesser instincts of their electorate (give me what I want, RIGHT NOW, never mind the system in place) and waste everyone’s time and money for something even someone who hasn’t gone to law school knows won’t pass muster. When politicians do this they are literally just campaigning with everyone’s tax dollars.

Just because these things are “opinions” doesn’t mean there aren’t clear cut obvious cases. If someone votes for a law that dances around the edges, sure that’s fine. But passing laws that have clear decisive precedent is what we’re talking about. And these things have real costs in time, money, and creating an atmosphere of innacuracy around common understanding of the law and the constitution.

He has publicly and explicitly declared that he has broken his oath of office to uphold the constitution by specifically saying he believes this law he signed is unconstitutional.

If you can’t understand that, then I don’t know what to tell you. Trumpian reality denial sure is ugly though.

I can’t think of a logically valid conclusion to your reasoning and I’ve seen you move the goal posts every post you’ve made so far.

I feel like that might also be used in reverse: You wouldn’t kill a five year old to save a mother. How about a newborn? How about when labor starts? How about the day before that?

I think most people* are against abortion and pro health/rape exceptions would say that there is a gradient. A fetus does not have the same right to life as a baby, but has more rights than a cockroach. You can kill it to save the mother’s life, but not simply because she would rather not be pregnant.

*at least those who have actually thought it through. A lot of people seem to recite their party line. One person I knew who was anti-abortion was also pro-choice, with the logic that illegal abortions are worse than legal ones, and knew from growing up pre RvW that outlawing abortions does not prevent abortions.