I can see people taking this law to state supreme court to have it shot down. This way federal court can’t get involved. The issue being one of purely state law. I see SCOTUS either not granting certiori or striking down the law on some minor technical issue so they can avoid creating new precedent.

"Signing it into law, Governor Asa Hutchinson wrote that he knows it is unconstitutional, "

Malfeasance at best. Not a lot different than the neobarbarians who stormed the Capitol.

I wonder if they plan to reintroduce legal segregation and maybe even legalized chattel slavery too just to see if they can get that overturned as well.

But they won’t send a penny to provide prenatal or indeed any medical care for alt hose kids if they are born to poor people.

I imagine birth control is next on the chopping block. Can’t interfere with “god’s plan”. As if one could interfere with a real god who has something in mind. Pretty feeble god if a bit of latex prevents things he wants to have happen.

Doing literally anything in god’s name proves you think you’re more powerful and capable than god.

It does seem like this bill is so extreme, even by conservative pro-life standards, that it could undermine their long-held and somewhat successful strategy of chipping away at R.v.W. one piece at a time.

This is just the worst kind of trial balloon – not like the legendary discrimination cases fought in the 1950s and 1960s that ultimately led to increased protections under the 14th Amendment. These trial balloons ultimately gave people rights and privileges they didn’t have before and made the country a better place (in theory). This bullshit abortion trial balloon is trying to take rights away by restricting the bodily autonomy of women across the entire country. These people have proven time and time again they won’t be happy until the subservience of women to men is enshrined into law.

About the best we can hope for – short of it getting killed in the appeals courts never to resurface – is that a high court decision somehow made it impossible to further restrict abortion in the future and strike down any current laws meant to do the same. That would be some delicious irony. Sadly I have little confidence this would actually happen given the highly partisan makeup of the courts today including SCOTUS.

I have never understood these exceptions for rape and incest.

It’s some mealy mouth “trying to have it both ways” bullshit in a failed attempt to sound reasonable. “Oh, abortion, bad! Unless some horrible trauma has been inflicted, then it’s ok!”

I would have preferred the legislation to include the exceptions for rape and incest, which has been my consistent view, and such exceptions would increase the chances for a review by the U.S. Supreme Court.

On this one point, Hutchinson is correct, and it’s the only bright spot in this travesty - the complete lack of exceptions makes it far more likely that when this does go to SCOTUS it’ll be a slam-dunk to throw out.

I can see people taking this law to state supreme court to have it shot down.

Again, these people want these laws to stick. They have made that abundantly clear. Over and over again.

What they want and what courts will grant them are not the same thing. They passed this dookie of a law specifically to be challenged. But there is no guarantee it will be challenged in federal court or go before the conservative stacked Supreme Court

Their goal is to overturn RvW and ensure that women are stripped of our constitutional rights.

They would reply “It was God’s will…”

In that case, what if I felt His will concentrating in my right hand, and He told me that it was His will to punch this governor in the face? Surely he’ll understand that it’s God’s will and not have me charged with assault. [Note: completely hypothetical scenario. I have no intention of committing an act of violence against anyone.]

I guess the only thing to do is for all the higher courts to make sure the organizations that sponsored this legislation are required to pay court and lawyer fees for both sides, every time there is another appeal to a higher court.

If the governor blatantly admits he signed into law an unconstitutional bill, the state should not be on the hook for any costs defending it. The bill should have stopped on the governor’s desk, so let the other bill stop there.

BTW, this is not just about this particular bill. There has been a sustained attack on women’s rights across the country for at least a couple of decades, and it is bearing fruit across the country. There are many places where abortion is already all but inaccessibly for the vast majority of women in many states. 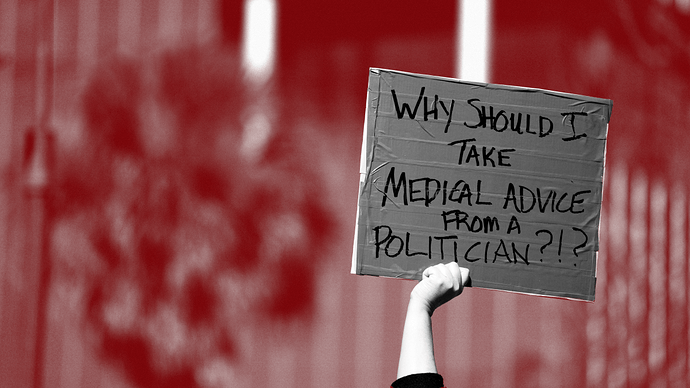 The Landscape For Legal Abortion Has Never Been More Dire

Two weeks ago, South Carolina’s Republican Governor Henry McMaster signed a near-total ban on abortions into law—the first, but not the last, abortion ban to pass in 2021. After McMaster signed the bill, the lawmakers and anti-abortion activists...

If I come off as “emotional wrought” (which apparently, is considered unfit for political discussions, even if it has a direct and material impact on one’s life), it’s because this has been ongoing for decades. The state of affairs is not just from the GOP pressing for these kinds of attacks on the rights of women in America, it’s also from decades of men who consider themselves to be feminist and allies not taking these sorts of undermining of women’s rights at face value. This has been put on the back burner time and again because it’s considered “settled law” that couldn’t possibly be overturned. As a result, there has been a slow nibbling away at the edges of women’s rights that isn’t considered a real threat to RvW. Except that it hardly matters if our rights are already basically gutted.

And BTW, this isn’t just about the SC. Trump appointed over 200 judges to federal courts, many of whom were recommended by the Federalist society, a group whose goals are to strip away rights from people who aren’t white men.

So, while these laws are meant to challenge RvW to get it overturned, they also DO want these laws to stick. These are people showing you who they are. They are people who do not believe that women deserve equal protection under the law or the right to privacy. They pass these laws because they believe in them. And it’s very possible that this latest round of “trial balloon” legislation is going to do the trick. By then, it will be too late.

TLDR - If I come off as “angry” it’s because I am and because we’re probably already fucked.

If I come off as “angry” it’s because I am

You have a right to be; so am I - this is some bullshit.

I’ve noticed that these compulsory-birthers are almost always anti-maskers, because making them wear a mask destroys their freedoms… & they scream ‘My Body! My Choice!’
The irony is lost on them.

It’s well past time to start taking these Christian dominionists seriously.
Because some of us are and will get hurt by these laws.

Texas has been run by these wing-nuts for decades; they give no fucks about who they hurt, as long as they are running things, and incompetence is almost indistinguishable from malevolence.

It’s difficult to describe Texas nowadays, since they keep making it neccessary to add adjectives & that gets unwieldy.
The Fascistic Theocratic Kakistocracy of Texas seems to sum it up.
ETA:

They are people who do not believe that women deserve equal protection under the law or the right to privacy.

If women don’t have these rights, then nobody does.

TLDR - If I come off as “angry” it’s because I am and because we’re probably already fucked.

You have every right to be angry. Let 'er rip!

I doubt they actually want to succeed. If it actually passes into law they’ve lost a valuable cultural wedge issue that can be used to get the fanatics to turn up to the ballot box. No, far better to keep making proposals that are unlikely to work, but keep the base good and angry.

Logic is not part of the equation. Rationality does not interfere with faith with these people.

I doubt they actually want to succeed .

They do. Let’s not mistake that they very much want women to be second class citizens.

They will just find another. There are plenty out there for them to exploit, as long as there are people they can put in their cross hairs.

This is not just a divisive tactic. They mean to put women in our place. If you read the article I posted above, they’ve gotten pretty far down that road already.

Sort of. Some of the die-hard originalists (like Scalia) had no problem ignoring stare decisis if he thought it’s what the farmer’s really meant. Gorsuch and Roberts are unlikely to take this up. Kavanaugh and Barrett and Thomas might

Signing it into law, Governor Asa Hutchinson wrote that he knows it is unconstitutional,

I really, really wish that there were an actual punishment for this. So tired of it. I thought there would be adults in charge when I grew up.

They want the law to stick, because its one more chip knocked away from the constitution. Also in their sites are birth control, the right for [others] to vote (40+ states have just put forward laws to restrict voting), The rigts of LGBQT people to exist, The rights of non-evangelicals to exist as non-evangelicals… They have every intention of turning the USA into a theocratic state. Just like ISIS, but with themselves in charge (the only problem they have with isis and the taliban is that brown muslim people are in those groups. They whole heartedly approve of the actual policies of those groups.

have you seen the make-up of the (pretty illegitimate) SCOTUS, lately? I’m not sure he’s wasting anything, other than the idea of basic human autonomy.