How airlines treat the one-percenters

There is also great stratification among air carriers in the quality of their premium cabins. Flying Singapore Air or Lufthansa in Business or First is very, very different than on a US carrier.

A few years ago I cashed in a huge amount of miles for a First Class family trip to Europe. Upstairs on a Lufthansa 747 was unbelievable - reserved for just 8 people. Each of us had a huge seat AND a full length bed with duvet and pajamas. Johnnie Walker Blue scotch, caviar and roasted duck for dinner and a private car upon landing to spirit us off to the First Class lounge for showers and lunch before our connecting flight.

Coming home in United First Class was barely passable by comparison. While the fully reclining seats allowed us to sleep, the food, service and entertainment was embarrassing in comparison. The cabin was dirty and my wife’s seat was broken. The dinner ‘menu’ was a photocopied sheet of paper and the movies were on the old tape cassettes. I would have been majorly pissed had I actually shelled several grand for tickets.

Ditto! I’m 6’2, and my knees are digging into the seat in front of me before the seat reclines, and I have flat out asked the person in front of me to not recline their seat because it will be exceedingly uncomfortable for them to be feeling every single movement of my knees for the entire flight. I never recline my seat because I know how uncomfortable it makes it for the person behind me, even if they’re not 5’8 or taller, and even when I’ve flown with my squirmy 18 month old on my lap and could have used the extra space between her and the seat in front of us, I still didn’t do it out of consideration for the person in front of me.

Regarding the article in question - I have only had the benefit of being bumped up to first class once, on an overnight flight from Toronto to Munich, and it was AMAZING. We had fully reclining seat-pods, the whole nine yards - though it was a bit difficult to juggle the toddler between myself and the wife. It also didn’t make up for the fact that we had a 12 hour layover in Munich (we had been redirected through there on our way to Dublin due to a snowstorm on the east coast, we were supposed to fly through Philly instead), but it was better than flying coach to Munich from Toronto

I am 6’3 and I never have problems with the seat. You have the entire seat in front of you to stretch out. That is your space to either throw a small bag under or put your feet under. Put your bag in the aisle and stretch your feet under. Honestly, I don’t know why this is so hard for everyone to understand…I have to explain this to friends every time we fly.

That and the seats are really designed to be reclined except on take off and landing. You recline, your hips go back and your knees follow suit. Folks that don’t recline are rude to the people in front of them that cause them to sit further up than they should and causes the people in front of them to do the same, and so on and so forth. Its a chain reaction. Recline. Its the people that don’t recline that have no respect (well…if they actually understand the implications).

LOL - sour grapes. As a Gulfstream owner, let me tell you the best thing about private air travel. We have private gates so we don’t even need to go in the same terminals as whiners like you. Christ, I wish we didn’t even have to share airspace.

Its a chain reaction. Recline. Its the people that don’t recline that have no respect (well…if they actually understand the implications).

Unless you’re the poor sod in a bulkhead row or the one in front of the emergency exit row, whose seats don’t recline at all.

Is there any way of buying this single issue

What y’all need is Cuddle Class. 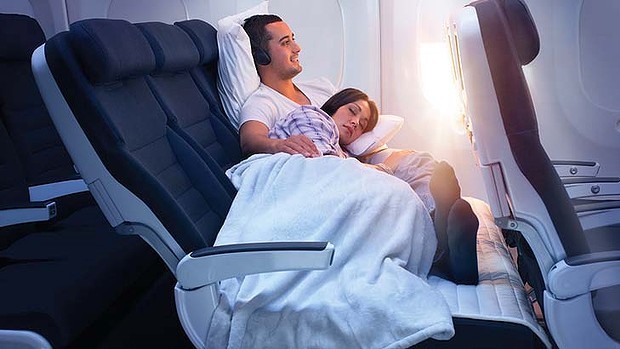 Insert snidely privileged remark about how people who can’t afford a magazine subscription just so they can read an interesting article obviously can’t afford to pay for a business-class seat because [Randian snarl at degenerate second-hander non-1%ers].

Quote from the article:

(Private jets divide the wealthy into two classes; there are the rich, who fly first class without thinking about it, and then there are the jet rich who have never seen the inside of concourse B)

I’m a frequent flyer (mostly on business) and I fly business class on intercontinental flights maybe once a year (a factor of it being a business expense and the distance exceeding my personal pain threshold in economy class – I’m middle-aged and creaky and flights over 8 hours in economy hurt).

Over the past decade I’ve noticed the number of first class seats on the major European carriers shrinking, while business class and premium economy seats increase.

It’s not hard to see why: if you compare the price of a flag carrier First Class seat with a NetJets charter over the same distance, the folks who can afford First can also afford the charter bizjets. And the charter bizjet business bypasses security completely; you drive straight out to the apron, get on board, and your chauffeur/pilot fires up the engine. Whereas even if you’re paying for First Class service from Lufthansa or British Airways, you still get to queue up to do the “are there any liquids in your bag? Can I X-ray your laptop?” tap-dance (and, if the drones don’t like your face, bend over for the cavity search).

But if you’re on a commercial carrier at all you’re not one of the elite.

7 bucks an issue on news stands. Or use the public library. I think there’s a version for the ipad, and various other tablets with subscription options more finely grained than one year.

But this article probably isn’t worth seven bucks, alone.

The top .1% who fly in their own jets domestically are much less likely to do so on long-haul international flights; most private jets are incapable of making the trip to Asia, Australia, or the middle east. And, frankly, the first class product on airlines like Singapore or Emirates is better than the vast majority of private jets. The fraction of people flying in private jets which are truly more luxurious than first class on Emirates long-haul is vanishingly small.

There’s also the factor that many of us would prefer to be on a much larger aircraft, subject to more safety restrictions, when flying hours away from the nearest land. Personally if I had unlimited funds I’d still be flying Singapore Airlines first if I was crossing the Pacific.

But if you’re on a commercial carrier at all you’re not one of the elite.

Actually, I am aware of a very 1%er who only flies commercial because of their concerns about safety records of private charter flights.

Keep in mind this 1%er is not the most logical of creatures, but they ran the numbers and determined there was a greater percentage of safety in commercial transportation.

So, it depends, I’m sure there’s someone who can’t afford private jets who maxes out the credit card for them anyway to offset the person I know.

This is especially true when you’re talking about ETOPS-certified aircraft and extremely long distances over water. I’d love to fly a private plane to my business meetings in Texas, but I’ll be damned if I’d fly one to Sydney.

Of course, this requires that you haven’t had to put your own carry-on bag under the seat in front of you because the undersized overhead bins are already full of other people’s baggage (and I’ve never encountered an airline that would let me put my carryon in the aisle, either).

No, they take commercial on something as short as New York to Boston. I think they’re nuts but see their flight habits as only one small branch on the crazytree.

Emergency row generally has enough leg room to stretch out anyways. May be a little more awkward on your ass, but your feet will thank you.

As for the bulkhead row? Yeah…I use to get the very last seat in a plane. It is generally the safest on on the flight statistically. And even if you die, statistically, you should be dying last! But you are right…it is the crap seat anyways. The only other advantage other than preferential viewing of the rest of the flight disintegrating in front of you before you meet your maker is that it is generally the closest to the toilet. Most of the time, I’d be the only one in this row when I was a paranoid flier, so I could also lay sideways to a extent.

Actually, I am aware of a very 1%er who only flies commercial because of their concerns about safety records of private charter flights.

Closest I know to something like that is a former colleague who refused point blank to ever fly on a DC-10/MD-11.

You can’t have them out during take off / landing, but move them into the aisle once you are in flight. I’ve done this on a hundred flights and no one has ever said a word to me. 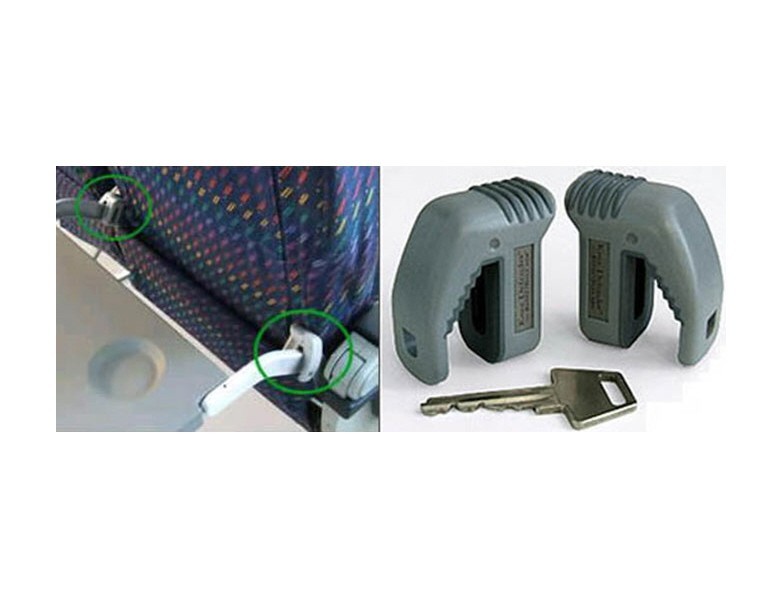